You are at:Home»Latest»Confirmed – Referee appointed for Celtic’s must-win trip to Ibrox

Bobby Madden has been appointed for Celtic’s trip to Ibrox on January 2. The whistleblower will oversee the game as Celtic go into it hoping to exact revenge on Steven Gerrard’s side for beating the Scottish Champions at Celtic Park back in October.

Now, the experienced referee will be tasked with officiating the game between the Glasgow rivals with Celtic needing a win to get their 10IAR bid back on track. 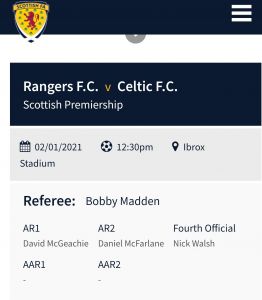 Madden will be assisted by David McGeachie and Daniel McFarlane with Nick Walsh carrying out fourth official duties at Ibrox.

Celtic have actually got a good record in Glasgow Derby matches in which Madden officiated. The last time actually being when Celtic won 2-0 at Ibrox in September 2019. The game was won thanks to goals from Odsonne Edouard and Jonny Hayes; however, Celtic will need to be solid in defence and menacing in attack regardless of who is the referee.

Madden was also in the middle when Celtic beat Rangers 2-1 in March 2019 in what was an ill tempered clash which pushed Celtic a step towards 8IAR. With that said, in March 2017, Madden missed a red card offence on Leigh Griffiths as Rangers nicked a draw at Celtic Park in Brendan Rodgers first season.

Previous ArticleCrystal Palace outcast could have a chance to revive his career with Celtic if they can offload Olivier Ntcham to raise funds
Next Article Video: Brendan Rodgers still has Celtic on the mind as he reminisces in a Leicester press conference