You are at:Home»Latest»Connah’s Quay Nomads FC of Wales – Celtic’s potential Qualifying Round 1 opponents in the 2020/21 Champions League

Ahead of Sunday’s draw for the first qualifying round of the Champions League, I’m reviewing the 17 potential opponents who lie ahead for Celtic.

With all but one of the possible options now known, we’ve already covered the first nine:

The Welsh representatives in the 2020/21 Champions League will be Connah’s Quay Nomads, who have a UEFA co-efficient of 3.250, compared to Celtic’s 34. 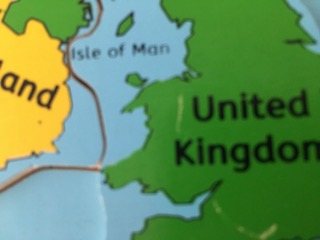 The Nomads were founded in 1946 in Connah’s Quay, just across the border from Chester, at the instigation of one of the Flintshire town’s most famous sons, Thomas George Jones. Welsh international defender TG Jones made over 150 appearances for Everton, winning an English championship medal in 1939. Twelve months earlier, he had lined up beside Joe Mercer and Tommy Lawton at Ibrox, as Celtic beat the Goodison side 1-0 to win the Empire Exhibition Cup. Originally formed as Connah’s Quay Juniors, the club adopted its present name in 1952. 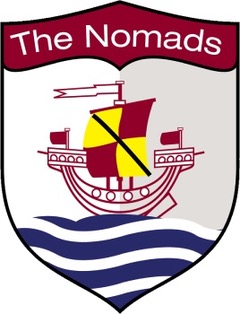 The club’s home kit is all-red, whilst the Nomad players wear an all-black outfit on the road.

The Nomads play their home games at the multi-sports facility Deeside Stadium in Connah’s Quay, which has a capacity of 1,500, with 500 seated. They have already agreed to play any home European qualification ties at the Cardiff City Stadium in South Wales.

The 2019/20 12-club Cymru Premier was suspended in March, due to the COVID pandemic, with six games remaining. At that point, Connah’s Quay were four points ahead of defending and perennial champions The New Saints. The Nomads were awarded the title on 19 May. 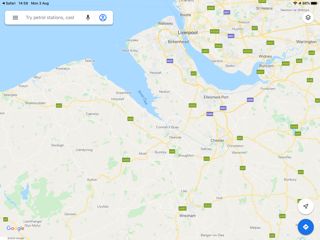 Last season’s Welsh title was a first-ever for the club, and they made it a double by claiming the Welsh League Cup in February. The Nomads now have the full set of domestic honours, having won their first Welsh Cup in May 2018.

They are also the first non-Scottish side to reach the final of the Scottish Challenge Cup, a feat they achieved in 2018/19. Having beaten Falkirk 1-0 on the road then Irish side Coleraine 2-0 at the Deeside Stadium, the Nomads scored twice in the last nine minutes to beat Queen’s Park 2-1 at Hampden in the quarter-final, setting up a last-four clash with Edinburgh City in Connah’s Quay. A record crowd of over 1,000 rolled up to see the Nomads recover from the loss of a second-minute goal to equalise through Michael Wilde and take the tie to a penalty shootout. Horan’s sudden-death conversion would prove decisive as the Welsh side won 5-4, taking them through to a final with Ross County in Inverness, birthplace of Nomads manager, Andy Morrison, on 23 March 2019. Despite taking a first-half lead through Michael Bakare, there would not be many happy returns for Morrison, as three late goals enabled the Dingwall club to clinch the trophy for a third time, in front of 3,000 fans at the Caledonian Stadium. 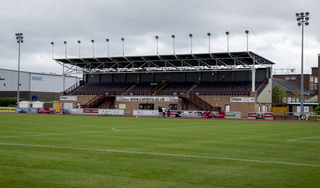 The Nomads have competed in European competitions in each of the previous four seasons.

They made their continental debut in the first qualifying round of the 2016/17 Europa League, a goalless draw in the first leg in Rhyl followed by a 1-0 victory in Fredrikstad over Norwegian outfit, Stabaek. The next round saw them follow in the footsteps of the Lisbon Lions, by travelling to Novi Sad for a tie against Serbians FK Vojvodina. It took a goal just four minutes from time by Aleksandar Palocevic to beat the Welsh outfit, with Vojvodina also winning the second leg in Rhyl, this time by 2-1.

The next season would see the Nomads drawn against another of Celtic’s former European opponents, this time HJK Helsinki, a Nathan Woolfe goal just before half-time in Bangor giving the Welsh outfit an historic first home victory. The experienced Finns would prove too strong in the Helsinki return, however, winning comfortably by 3-0.

A third successive appearance in the first qualifying round of the Europa League saw Connah’s Quay Nomads paired with Shakhtyor Soligorsk in July 2018, a last-gasp Morris penalty the only highlight as the Belarusians won 3-1 in Rhyl. Shakhytor would then follow that up with a 2-0 second-leg victory in Salihorsk. 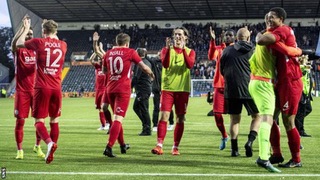 Last season’s opening Europa League tie would see the Nomads produce a sensational away result to overcome a first-leg deficit and qualify, albeit, sadly, it was at the expense of one of our Scottish clubs. Kilmarnock looked to have done the hard part after a late Eamonn Brophy penalty and a stoppage-time strike from former Celtic defender Stuart Findlay had cancelled out an own goal from current Hoops star, Greg Taylor, to give the Ayrshire side a 2-1 win in Rhyl. The following week’s return at Rugby Park saw a procession of missed chances for the hosts before Ryan Wignall headed the Nomads in front on the night early in the second half. With Killie still holding the advantage on away goals, the tie turned around with 12 minutes to play, Findlay red-carded for hauling down Jamie Insall before Callum Morris netted from the spot. 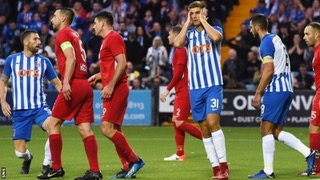 The Nomads’ run would end in the second qualifying round against yet another of Celtic’s former European foes, Partizan Belgrade, who won 1-0 at Rhyl’s Belle Vue in the first leg. The 1966 European Cup-finalists, who featured in that incredible 5-4 ‘Dziekanowski game’ at Parkhead back in September 1989, then completed the job with three second-half strikes in Serbia.

Celtic and Connah’s Quay Nomads have never met in European competition, however, the Hoops have faced Welsh opposition twice previously.

Wim Jansen’s first competitive match as Celtic manager was a UEFA Cup first qualifying round tie in Cardiff against Inter CableTel (formerly Inter Cardiff) in July 1997. The first leg at Ninian Park was a rite of passage moment for my eldest son, as he made his first European trip with Celtic with his dad by coach via Birmingham. 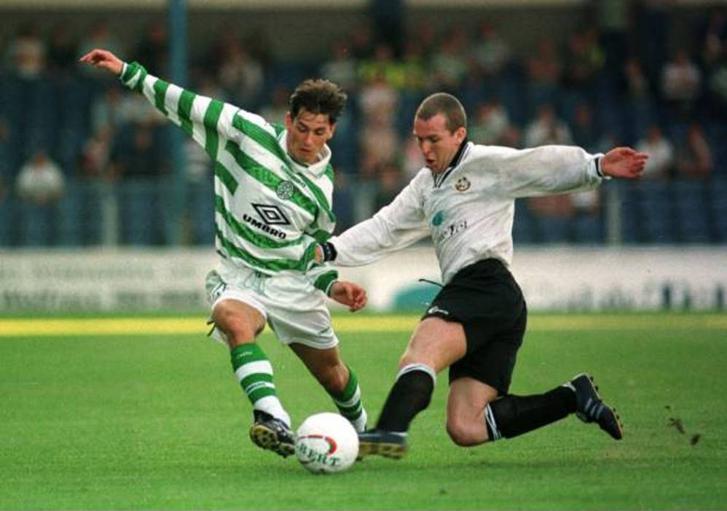 The scene of Jock Stein’s tragic death 12 years earlier formed the backdrop for a low-key start to the new Parkhead chief’s era, a penalty from Andreas Thom and goals from Tommy Johnson and Morton Weighorst giving the Hoops a 3-0 win. Two days later, Jansen signed his former Feyenoord player, Henrik Larsson, and life would never be quite the same again for those of a Celtic persuasion. 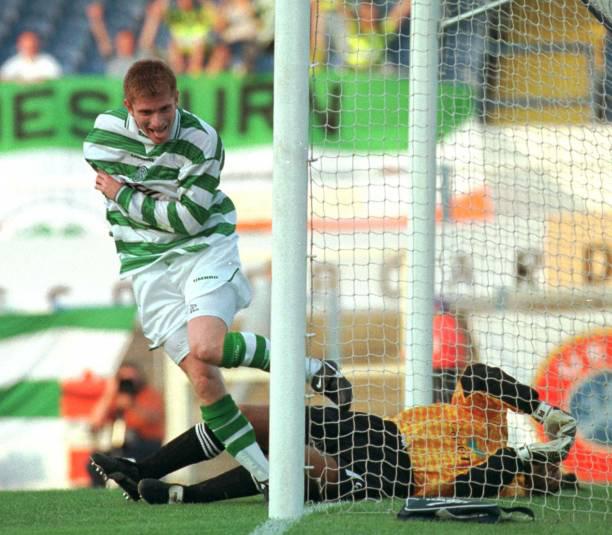 Henrik was ineligible for the second leg in Glasgow, when Thom again opened the scoring from the spot, further strikes from Darren Jackson, Tommy Johnson, David Hannah and Chris Hay sealing a 5-0 victory on the night. Celts would then beat Tirol Innsbruck, with the great Henrik opening his Parkhead Euro account with an own goal, before losing to Liverpool on away goals.

I was working in North Wales at that time and drove to Cardiff just in time to catch the second-minute opener from new signing Eyal Berkovic, with fellow new-Bhoy Olivier Tebily effectively ending the tie within 20 minutes. A double from Larsson either side of a Mark Viduka strike made it 5-0, before substitute Harald Brattbakk finished the scoring with six minutes remaining. 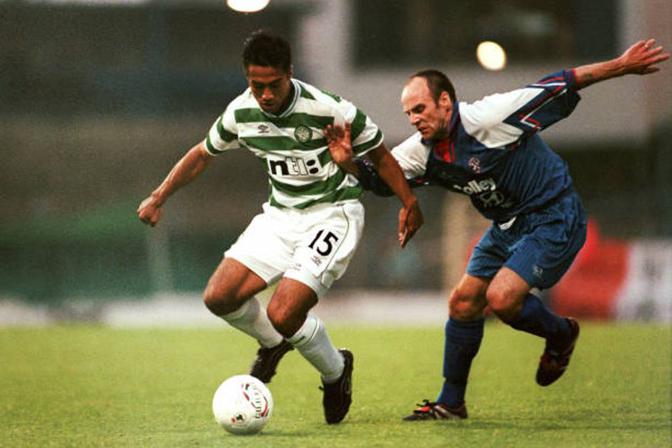 The Norwegian striker then opened the second-leg scoring as Barnes rang the changes, with debuts for Russian goalkeeper Dmitri Kharine and young winger Jamie Smith, who scored Celtic’s second goal on the hour, within 15 minutes of his introduction. Johann Mjallby and Tommy Johnson completed the rout as the Bhoys qualified on a 10-0 aggregate. The Hoops would beat Israelis Hapoel Tel Aviv home and away before the Barnes tenure began to unravel following the horrific double leg-break suffered by Henrik Larsson in Lyon.

The Connah’s Quay Nomads squad all hail from either England or Wales, however, if they are drawn to face Celtic, you should expect to hear a lot about their larger-than-life manager, Andy Morrison, who is a Scot. 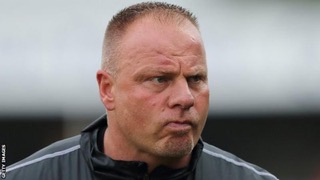 Appointed in November 2015, Inverness-born Morrison is the inspiration behind the Nomads’ unprecedented run of success since then. Having moved to Plymouth aged eight, he played over 100 games for the local Argyle before one legend – Peter Shilton – sold him to another – Kenny Dalglish, in 1993, the King at that time manager of Blackburn Rovers. He made five appearances as the Ewood Park club finished runner’s-up to Double-winners Manchester United, thanks mainly to the goals from a young Alan Shearer.

In December 1994, he was linked to a move to Tommy Burns’ Celtic, the Parkhead manager buying John Hughes from Falkirk instead, as Morrison signed for Sam Allardyce at Blackpool. He would become captain at Bloomfield Road and at his next club, Huddersfield Town, before making his career-defining move to Manchester City. He was again appointed skipper at Maine Road under Joe Royle, Morrison leading his men to victory in that famous Play-off final at Wembley in 1999, despite Gillingham taking a 2-0 lead into the final minute. 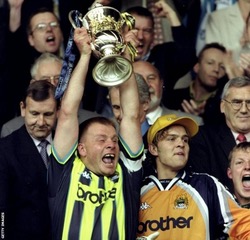 I hope you enjoyed that look at the tenth of our potential European opponents and their previous record in continental competition.