Rafael Felipe Scheidt made his debut for Celtic on this day in 2000 in a 6-2 win over Dundee at Celtic Park. John Barnes and Kenny Dalglish spent an incredible £5million on a player that neither of them had seen playing. Apparently they based their decision on a compilation video put together by the player’s agent.

Scheidt is described on Celtic Wiki as being “a poor player – slow, unskillful, and lazy – but he seemed cursed from the moment he arrived in Glasgow” while a teammate said, “the guy couldnae trap a bag of cement”. 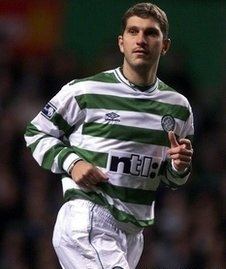 Celtic were told that Rafael Scheidt had made 16 appearances for the Brazilian national team, but it transpired that 13 of those were with the Brazilian OLYMPIC team.

“Kenny Dalglish is said to have been the instigator for his move, having watched him on videos alone and recommended him. Barnes admitted, seemingly unembarrassed, that he had never seen him play live: he was signed based on a video of his finest moments (though bizarrely it later transpired that these had all been harvested from matches in which Gremio (his former club) had suffered heavy defeats),” again from Celtic Wiki.

Tommy Burns had just returned to the club to work as assistant first team coach on a short term contract to the end of the season, and he took charge for this game after caretaker boss Kenny Dalglish was absent due to food poisoning.

The Celtic goalscorers were Tommy Johnson who got a hat-trick, Mark Viduka who got a double and Stan Petrov. Here are the highlights…