You are at:Home»Latest»Decline and Fall, Football’s role in the circulation crisis in the Scottish print media

CELTIC supporters are among the most media savvy in the UK, probably because we’ve had to be tuned in to the various agendas that the press will deploy to portray an anti-Celtic narrative.

We don’t have to go back very far for some examples. Last weekend, after his side disgraced themselves at Hampden in the Scottish Cup semi-final, Aberdeen manager Derek McInnes gestured towards a section of the Celtic support who chanted that dreadful ‘Cheer Up’ song. He was sent to the stand and this became the big post match news story.

Not the four red cards that Aberdeen received – was it even reported why McInnes’ assistant was sent off? The two reds on the park were disgraceful, both vicious, absolutely shocking challenges and you would have thought that the print media might have wanted to condemn these players and their club, maybe pointing out that they had not acted in the best interests of association football? 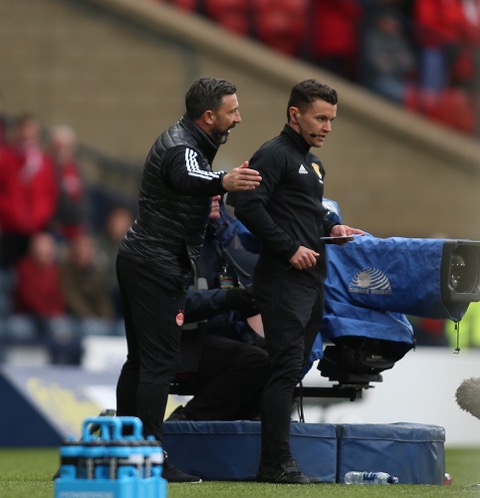 Nor was there any mention of the Aberdeen singing – about Jimmy Saville and child abuse. Is that more acceptable than what some Celtic supporters chanted – at the game it seemed to come from a particular corner of the Celtic support, over next to the Dons fans but their Saville song seemed to be sung by the lot of them.

All these chants are disgraceful and Celtic FC and various Celtic fans sites like this one have been active this week, and indeed before, in working to stop the offending ‘Cheer Up’ song.

Have Aberdeen said anything? Have they even been asked?

McInnes used to play for the old Rangers, during a period when they enjoyed considerable success. There are videos of the Rangers players on You Tube celebrating a title win in the dressing room after the match singing a proscribed sectarian song. This was probably just before McInnes’ time at the club but by the time he arrived the culture there certainly had not changed, so did he ever sing such songs in similar circumstances?

Then if we go back to the game against the Rangers, when again our opponents lost their discipline, lost the game and had players sent off, yet all they wanted to talk about was Scott Brown – who was elbowed, punched in the face and squared up to at the final whistle.

Their momentum helped the Scottish FA to conclude that Broony should be cited for ‘not acting in the best interest of association football’ and yesterday Celtic acted to bring that hearing forward – as is their right. That upset the hordes though and the agenda will be obvious in the run-up to this. Ban Broony. For what?

Then there was the Evening Times tweet about the Celtic supporter who had been stabbed after the Glasgow Derby in the Merchant City. Glasgow’s only Evening Newspaper tweeted that the victim had passed away.It wasn’t true. It spread like wildfire across social media and some of the chap’s family read it on their and were grief-stricken.

How could they get this so dreadfully wrong? Surely you only report on the when you have had official word especially if you are doing so under the banner of the city’s evening newspaper?

The latest batch of circulation figures for March 2019 have been released by the ABC (Audit Bureau of Circulation), and in line with a now well established trend the printed media’s terminal decline continues.

The full extent of the circulation losses can be seen on the Press Gazette website.

It’s sister paper The Sunday Mail has experienced an even bigger drop, down 13% to 119,255 copies, this from a newspaper that at its peak was selling almost a million copies every Sunday.

The other Scottish paper that gets a mention in the national figures is The Sunday Post, and again like the Sunday Mail used to sell almost a million copies per week. Now it’s struggling to keep itself above the 100k sales figures – in March 2019 it was selling just 103,383 and that includes 538 in ‘but sales’ – an example of this would be the freebies that you get just before boarding a plane.

Grim reading for the newspaper executives involved. Other regional papers, such as The Evening Times and The Herald are probably in an even worse position – they don’t report on circulation on a monthly basis but do so every six months. 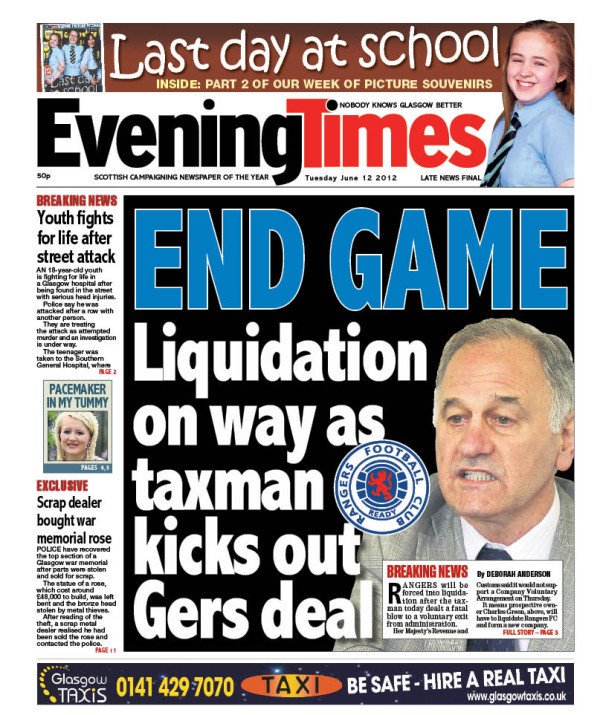 Occasionally they do get it right…

Again looking at The Press Gazette we can see from the latest figures released on 28 February 2019, how they have been under performing.

The Scottish titles included in this report from the ABC are as follows:

So there is a cross the board decline in the print media in Scotland and it has to be said, given the size of the population in Glasgow, the papers published in Scotland’s biggest city – Glasgow – are performing particularly poorly.

And some of their bosses will still wonder why…

Previous ArticleLenny to Fulham is the latest rumour but is a Celtic Announcement imminent?
Next Article Dundee 5 – 1 Celtic – ‘Twelve memories from that awful day at Dens Park,’ David Potter