CELTIC are expected to win their 9th title in a row today, making it the second time in the club’s history that 9IAR has been achieved having achieved it under Jock Stein. Dixie Deans was part of that side in 1974 that did it first and he has backed Neil Lennon to push on and achieve the fabled 10-in-row.

Deans spoke to the Scottish Sun about his own regrets at not being able to get over the line of the elusive 10 but his delight in setting the record of 9IAR. The legend has said that no one can complain about Celtic being awarded the title due to the enormous lead held over Rangers.

“I don’t think anyone can argue with Celtic being announced as champions. At the time the league stopped they were way ahead of Rangers — and I saw no chance of Celtic being pulled back.

“Certainly, not what I saw of Rangers in the weeks before the season had to be closed down.

“Look at how they were playing and the clubs that took points off them. Compare that with Celtic’s form — they were relentless and also scoring plenty of goals.

Celtic were 13 points clear of Rangers when COVID-19 forced the games to be postponed indefinitely and the likelihood is that the lead would have been extended with eight games to go.

Deans has hailed Lennon, branding the Irishman a winner. It was Lennon that started the push for 10IAR with the first title success in 2011/12 season and eight years later, Celtic are one year away from breaking the record set by Stein’s side.

“I’m delighted for Neil Lennon and the players. The manager’s done very well. He’s a winner, it’s as simple as that.

“We all just want to see Celtic do well, consistently be the best team in the country. I think there’s only James Forrest and Scott Brown now who have been a part of every title. Wee Jamesy’s a terrific winger and I’m so pleased for him.

“And as for Scott, well he’s been a brilliant captain. He’s been superb for Celtic.”

Whilst Celtic won’t be able to parade the trophy around Celtic Park in the customary fashion that we have enjoyed over the last eight years, we will relish what has been an outstanding achievement.

Deans’ side were agonisingly close to sealing 10 and it would has been an incredible achievement to match the record set by that team back in the 1970s. Should Neil Lennon’s team eclipse the achievement of Stein’s men, it would earn the players legendary status. 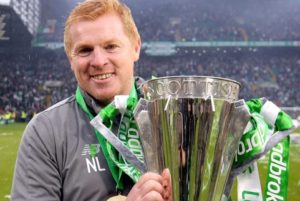