You are at:Home»Latest»Eddie Howe on punditry duty as Celtic fans hope for announcement

Eddie Howe appeared on punditry duty for two Premier League clashes as Celtic fans hope that the next time they see the Englishman it will be when Celtic announce him as their next manager. Howe was on the couch for the Aston Villa clash with Fulham before Brighton faced Manchester United.

The 43-year-old wasn’t tempted into any talk of the Celtic job as the former Bournemouth boss stuck to talking about the Premier League. 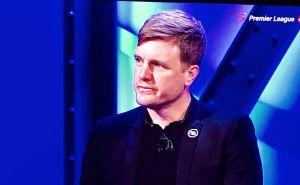 After eight years with Bournemouth, Howe left the Cherries with an enormity of goodwill having continued to punch above the weight of the small, costal side against the financial might of the Premier League. Howe’s stock in England is still high but Celtic look to have convinced him of the project that is underway in Glasgow with a new footballing operations ongoing.

Howe has been out of work since leaving relegated Bournemouth in the summer and will look to appoint a manager since Neil Lennon left his role with 10IAR all but over. Howe represents the modern manager and exactly who Celtic should be targeting.

Howe would represent the first of many incomings to the club as Dominic McKay prepares to take the helm during the close season. Fergal Harkin and Richard Hughes have also been mentioned for executive roles within recruitment and football operations.