You are at:Home»Latest»Elyounoussi – Celtic’s Steal Deal

Football Insider have claimed that Celtic have approached Southampton over the purchase of Mohamed Elyounoussi. The Norwegian has been a revelation since arriving at Celtic Park from St Marys; however, it is claimed that the Celtic hierarchy have reached out to the South Coast club with a view of making the ex-Basel man’s Glasgow stay permanent.

The winger, who is keeping the jersey despite Mikey Johnston, Jonny Hayes and Scotty Sinclair vying for the same position, has scored seven times and assisted six goals in just 12 games. Yet, Southampton would be willing to do the deal for between ‘£8-10 million’. 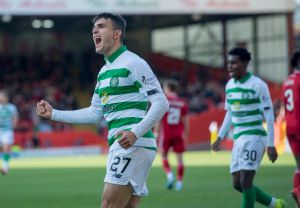 This deal could represent great value for the Scottish Champions as it is clear the quality Elyounoussi has in his locker, proving why Southampton signed him for £16 million. Although, with the Saints hovering around the foot of the Premier League table, Elyounoussi would have been a luxury, unable to attempt to build the play the way he did at Molde, Basel and now Celtic.

Celtic must break the bank for Elyounoussi as he represents a quality talent and being a 25-year-old, has sell-on potential, which is something that Peter Lawwell will like.