You are at:Home»Latest»Euro 2020 Celtic Connections: Five Of The Best Danish Celts

Today’s edition of the Euro 2020 Celtic Connections centres on the Denmark v Czech Republic match at 5pm this evening. Both teams have done extremely well to reach the Quarter Final of the tournament and now have a real chance of progression in the Baku Olympic Stadium. The Czech’s have been very positive in their approach to games and stunned the Netherlands with a fine 2-0 victory last time out. On the other hand, Denmark have overcome an extremely traumatic experience, when Christian Eriksen suffered a cardiac arrest during the Dane’s opening match against Finland, to record fabulous wins against Russia and Wales in their last two outings.

In terms of the Celtic connection with Denmark, there have been eight Danish Celts.

Bent Martin was the first Danish man to play for the Hoops. A goalkeeper, he was signed by Jock Stein in February 1966 after he had impressed in a European Cup Winners’ Cup tie between Celtic and AGF Aarhus a few months earlier. Martin only made one appearance for Celtic, in a Glasgow Cup Semi Final against Queens Park on 10 October 1966, when Celtic won 4-0!

Following Martin’s departure, the next Dane to arrive at Parkhead was Leif Nielsen. Like Martin, Nielsen was also a goalkeeper. He joined from Greenock Morton in 1972 and was intended to bolster the Hoops’ options between the sticks, but he left without making an appearance.

The third Danish Celt to be excluded from our top five was Morten Rasmussen. Morten ultimately took the same route as Erik Sviatchenko, from Paradise to the MCH Arena (Midtjylland), in 2012. Yet, he arrived in 2010 with high hopes of a successful Celtic career. It didn’t work out for the striker in Glasgow, and the most notable part of his time at Celtic was probably when he was asked to play in goal during a loan spell with Sivasspor. Although, he did score a late winner against Hibernian during what was effectively a dead rubber SPL game.

Aside from these three Danish players, who didn’t get much of a chance at Celtic Park, there have been five prominent Celts from the nation. Here’s how we rank them:

Tommy Gravesen is something of a cult figure with the Celtic faithful because of his character as a maniac! He was nicknamed “Mad Dog” and was certainly a maverick. Tommy arrived from Real Madrid for £2.2m in August 2006. Naturally, there were huge expectations for him, but his inability to follow instructions frustrated Gordon Strachan and his lack of discipline meant that he was left out of the team, though his talent was never in question. Gravesen left in 2008, but had scored some great goals for Celtic, including two against Rangers, and also played in some huge occasions such as the famous 1-0 victory over Manchester United. Tommy left with a league winner’s medal to his name and hundreds more hilarious stories! 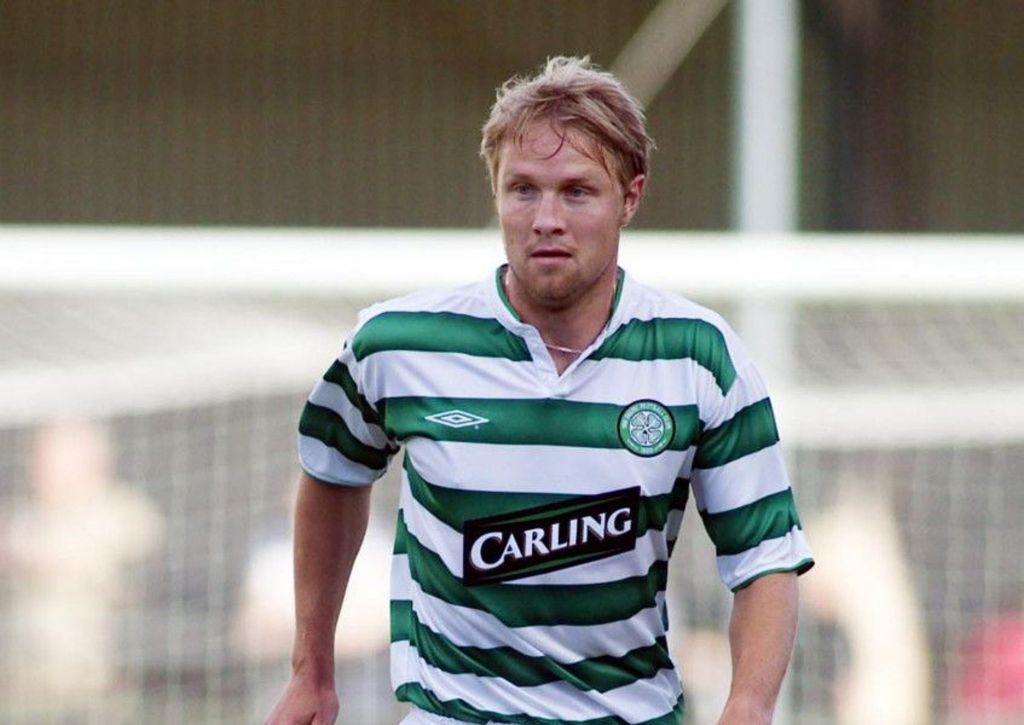 Ulrik Laursen joined Celtic for £1.5m in the summer of 2002. Arriving from SPL rivals Hibernian, Martin O’Neill hoped that the defender would prove to be a useful option at left back. In truth, he didn’t live up to the hopes many had for him and never cemented a regular starting position. However, he did play in the memorable 2-0 win over Blackburn at Ewood Park (men against Bhoys indeed), and came on as a substitute against Porto in the UEFA Cup Final. Injuries curtailed his involvement in the 2003/04 season, meaning he missed out on league or cup medals, but he returned to the line up during the following camapign. Eventually, Laursen left for his hometown club OB Odense on a free transfer in 2005. He departed with only a Scottish Cup winners’ medal to his name, but was involved in the club during a golden time.

For the top three, we decided to put the question to Celtic fans on Twitter. A poll, with over 1,000 votes, determined the following order:

Of these Danish men, who was the better Celtic player? I’ve left out Gravesen because he was a nightmare but a madman 😂

Erik Sviatchenko made his name at FC Midtjylland, where he shone out as a centre half for several seasons. He arrived at Celtic Park as an unknown quantity, but soon cemented his place in the back line and became a solid addition to the squad. He rose to real prominence during Celtic’s Invincible Treble winning season (2016/17), in which he was a regular starter in a history making team. However, Sviatchenko got a bad injuring during the European qualifiers of 2017/18 and ended up being loaned back to Midtjylland after three months of recovery. That loan became permanent in the summer, with the player rejoining his old club permanently for a £1m fee. He loved being a Celtic player and continues to support the club to this day.  At £1.5m he represented excellent value for the Hoops and he will always be welcomed back to Paradise.

Morten Wieghorst was a popular Celtic midfielder, who signed from Dundee in 1995, though his time in Glasgow was largely blighted by injury. For that reason, he was not often a regular starter for the Hoops. Although, he did play 31 games for the club during the season when Celtic stopped the ten. In 2000, Wieghorst was diagnosed with the Guillain–Barre syndrome, and following treatment he spent a year in recovery before returning to play in a Scottish Cup game almost two years later. He played just three league games for Celtic late in the 2001/02 season, before returning to Denmark. Having played a big part in the incredible ‘stopping the ten’ campaign, Wieghorst will always be popularly remembered by the Celtic faithful.

Signed from West Ham in September 1997, Marc Reiper instantly settled as a centre back at Celtic Park. Excellent in the air and boasting a superb positional sense, Rieper was a pivotal part of Celtic winning the league in his debut season… and few titles come more important than that which stops your rivals eclipsing the Lisbon Lions’ record by winning ten in a row. He also scored the goal in a 1-0 victory over Hibs to keep the title alive, meaning that he was an essential player at both ends of the pitch!

Beyond the league campaign, Reiper played throughout the League Cup success in 1997/98. It was during this time that he began to form a formidable partnership with Alan Stubbs at the back.

Unfortunately, after just one full season at Parkhead, Rieper suffered a toe injury in October 1998. Despite undergoing surgery and intensive treatment, he was forced to retire from football in July 2000 at the age of 32. His presence was immediately missed as Rangers cantered to the title in 1999, before Martin O’Neill arrived to put the Celts back on top.

Celtic keeper on Real Betis: “They are a proper team, they really are. It’s a footballing city”
“In all honesty, they’ve probably been starved of that a little bit lately,” Martin O’Neill’s European Target for Postecoglou
Real Betis v Celtic: “We want to prove that we are worthy of this stage,” Josip Juranovic