The nation featured in this edition of the Euro 2020 Celtic Connections is Spain, who play against Poland at 8pm this evening. The Spanish are heavy favourites to win the Group E match and make amends for a disappointing 0-0 draw against Sweden in their opening game. However, this article is designed to explore the Celtic player connections with the country.

Real Betis v Celtic: “We want to prove that we are worthy of this stage,” Josip Juranovic
Photo Of The Day: The Streets Of Seville
“Seville was a fantastic occasion but a big, big disappointment,” Martin O’Neill

Despite playing against many Spanish clubs in European competition and the famous story of Celtic presenting their kit to Real Betis in the early 1900s, it is quite surprising to note that only three Spaniards have represented the Hoops. 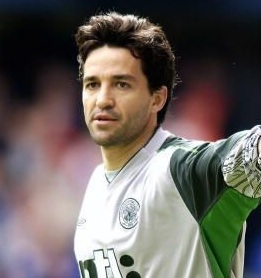 Broto signed for Celtic in the famous 2002/03 season, which combined agony with ecstasy. He arrived at the age of 31 and was a good back up option considering his experience with Real Zaragoza and Villareal. Broto only made 10 appearances for the club, keeping four clean sheets. However, he was an assured presence between the sticks and most notably played well in a 2-1 victory at Ibrox – a match better known as Beachball Sunday. Despite only playing a handful of games at Parkhead, the club left an indelible impression on him. Indeed, in 2017 Broto said: “Celtic is a spectacular club. In Spain, they don’t even know half of how football is experienced there. I always support Celtic – even when they play against Barcelona.”

David Fernandez arrived from Livingston for £1m. He had only scored 8 goals in 41 games for the so it was a strange signing by Martin O’Neill. Nonetheless, he arrived with everyone’s best wishes, but after scoring just one goal in 11 games, he was loaned back to Livingston. He had an impossible task in terms of breaking into the Celtic forward line with Henrik Larsson, Chris Sutton, John Hartson and Shaun Maloney all ahead of him in the pecking order. Eventually, he left for Dundee United in 2005 with his only Celtic highlight being a goal in the 2-0 victory over FK Suduva during the 2002/03 UEFA Cup qualifiers. In the summer of 2012, Fernandez was appointed as a scout for Manchester City.

Marc Crosas was born in Girona, which is under Spanish jurisdiction, but he played senior international football for Catalunya. For the want of avoiding a political argument, I have included him in this article of Spanish Celts. Crosas arrived from FC Barcelona, which instantly sparked great interest among the faithful. He was a talented and technically gifted player, who fell in love with the club. After making a great start to life in Paradise, he voted as Celtic’s Young Player of the Year in 2008/09. However, he never nailed down a consistent first team place and was left frustrated at only being given 51 appearances (11 as a sub) in three years. As such, he was sold to FC Volga in 2011. Crosas remains a massive Celtic fan with great love for the club.

Previous ArticlePhoto Of The Day: Throwback To International Stars In Their Notts County Days
Next Article Leicester City Priced Out Of Edouard Transfer, Report Claims