You are at:Home»Latest»Ex-Celt on Adjusting to London Life and Celtic Connection

Kieran Tierney has spoken out about settling in at Arsenal, despite his slow start to life in London. The 22-year-old left Celtic in the summer for Unai Emery’s Arsenal for £25 million; however, he is using his ex club to make new friends in London.

Speaking to Pro-Direct Soccer’s Pavement to Pitch – the left-back also revealed that he has a Celtic connection at his new club that has made him feel at home.

“It’s hard to say though because everyone has been great, even the staff.

“There’s a few Scottish staff as well – Celtic fans – so they’ve helped me settle in and make me feel at home.” 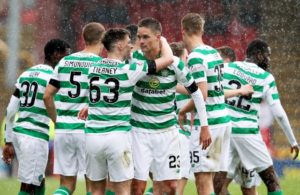 Tierney continued by listing off his fellow Arsenal teammates that he bonded with over the treatment table. Tierney was recovering from a double hernia when he signed for the Emirates side in the summer.

“Hector is a big voice in the changing room as well so he’s helped me settle in. Rob Holding and Calum Chambers as well have looked after me.”

Tierney has made eight appearances since arriving, mainly in the Europa League, chipping in with two assists.