You are at:Home»Latest»Ex-Celt Paddy Roberts in late goal drama, sends Sunderland to Wembley

Former Celtic winger Paddy Roberts has conjured up a huge moment for new club Sunderland. The English winger scored a late winner as The Black Cats sealed their place in the League One Play-Off after beating Sheffield Wednesday.

Is that the goal that sends Sunderland to Wembley?! 🔥 pic.twitter.com/hAll7n1qfe

Roberts scored 18 goals in 79 appearances in Scotland and was very impressive under Brendan Rodgers in the Invincible season. The move to Sunderland appears to offer him first-team football and the chance to regain confidence. This goal will do just that. The right-winger would have the chance to settle, something he hasn’t had the opportunity to do since leaving Celtic. He will be hoping that he can help propel Sunderland back to The Championship with a view to an eventual charge on The Premier League.

He had a successful two-and-a-half-year leaving with seven trophies and the adoration of the support. Roberts has business interests in Glasgow and if Celtic had made an offer, he would certainly have be keen on a return. Although, it is indicative of the way Roberts’ career has arched that Postecoglou maybe thought that another stint at Celtic may not be what he was needing. 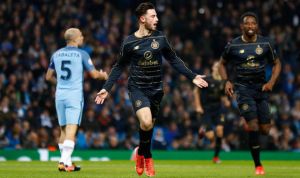 Celtic are said to have considered bringing Roberts back to Paradise but Postecoglou wasn’t convinced that bringing the Englishman back would overly benefit the team. Shortly thereafter, Postecoglou went for Portuguese winger Jota – whom he secured on a loan with an option to buy. Roberts has often been linked with a move back to Celtic but with just a handful of goals since leaving in 2018, it is highly unlikely that Celtic would be keen on reigniting their long-standing interest in the player.

Jota is said to be the subject of Celtic’s interests for a permanent move from Benfica, such is the impact that the loan signing has had. Celtic have moved on from Roberts, even if he was an excellent part of a successful team. Good luck to Sunderland in the play-off final against Wycombe.

Previous ArticleYou’ll get something Twice as Good, with Harry, Harry Hood
Next Article Former Celtic goalie set for return to Scottish football