FORMER HEARTS MANAGER Craig Levein has revealed that Celtic tried to sign Aaron Hickey ‘five or six times’ during his tenure as boss at Tynecastle. Hickey has one year remaining on his deal at the Scottish Championship club but they could be forced to sell so they do not lose out on a big transfer fee for the left back.

Speaking to BBC Radio Scotland, Levein revealed that the Scottish Champions have tried numerous times to buy back the 18-year-old in recent times only to be given the knock back by the Jambos.

“Celtic tried to buy him back half-a-dozen times and that just got knocked back.

“Celtic tried to buy him back while he was in the first team, I think it was five or six times.” 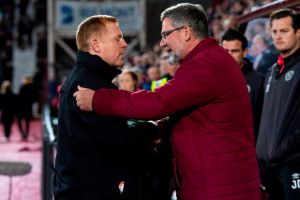 In 33 appearances for Hearts, Hickey has caught the eye of a number of potential suitors and a move for him would still make sense especially as the club look for another left back. Levein rates Hickey very highly and believes that he could even play in the midfield in the future.

“He’s got really good defensive qualities. He likes defending, which is a rare thing these days.

“He might end up going back into the midfield area. I think he’d be a fantastic holding midfield player with his great awareness of danger and his ability to get out of tight situations with the ball at his feet.”

The youngster was at Celtic before a move to the Edinburgh side and it is in Gorgie that the youngster has broken through. Despite being allowed to leave, it was clear that Celtic rated the player very highly and in doing so, they placed a sell-on fee onto their deal with Hearts.

Previous Article‘There is nothing to say’, Ajeti’s agent refuses to comment on Celtic move
Next Article Video: Celtic to re-open stunning new flagship store at midnight