Fran Alonso confirmed to The Celtic Star this afternoon that he is on the verge of signing a new striker and is working hard to conclude the deal for a third forward who can play as either a striker or a number 10.

Earlier this week the Celtic FC Women manager concluded the deal to bring highly rated American wing-back Hana Kerner to the club, subject to international clearance, with the 25 year-old currently awaiting her visa before she can play. “That I expected to happen in time for next weekend’s SWPL1 fixture away to Hearts,” Fran told us. 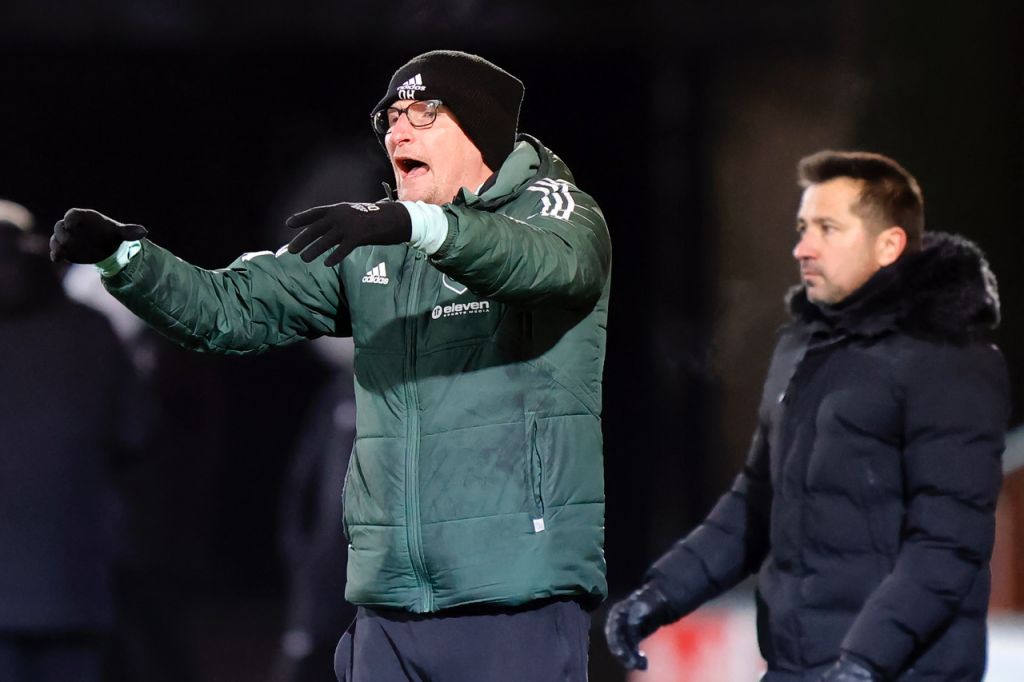 With his Celtic side dropping points in the goalless draw against Motherwell on Wednesday night, they had been scoring for fun on the previous two matches with 17 goals being scored without reply, Alonso is pushing forward with his transfer plans for the January window.

However the loss of top scorer and in our view the best player in the league in Clarissa Larisey, who left to sign for Swedish club Hacken to play in a fully professional league with her place in the Canada squad in mind ahead of this summer’s World Cup, has left a hole in the squad and the two new arrivals will be tasked with filling these gaps.

Up until last weekend no team had taken any points off the big three at the top of the league but Hearts then Motherwell in the space of three days were both able to get a point off theRangers and Celtic respectively. The wider picture on this shows that there is perhaps a slow but sure improvement in the quality of the teams throughout the league with Fran Alonso in particular full of praise for Sunday’s opponents Partick Thistle. 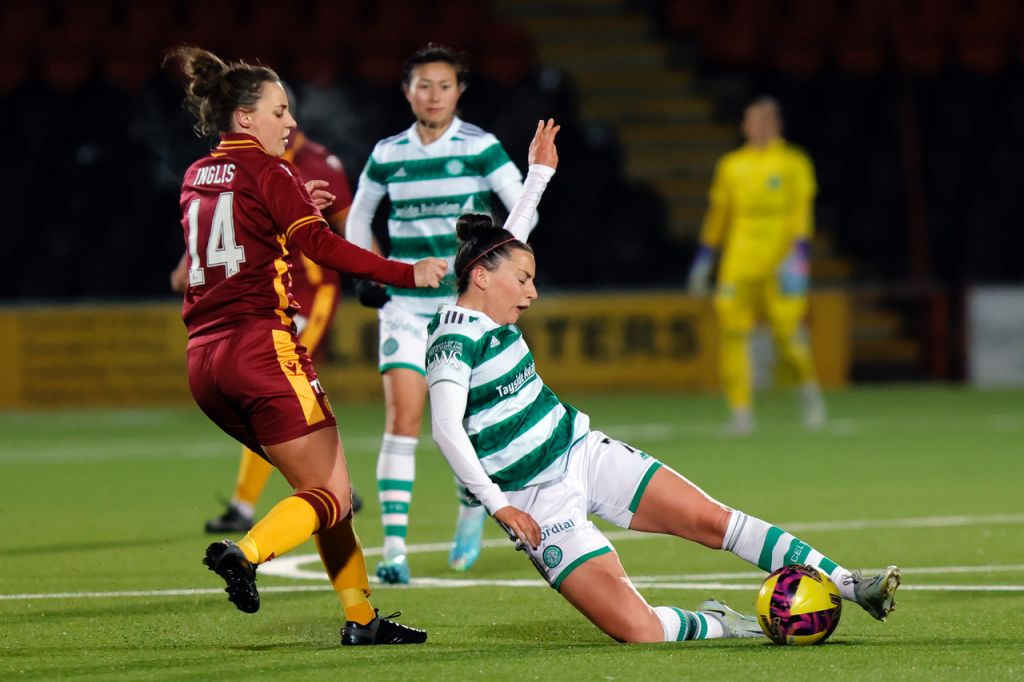 Alonso noted that after their first season in the SWPL1 last year, the Jags have consolidated their place as a top flight side brilliantly and are now recording some really impressive large wins with former Celt Rachel Donaldson a stand-out.

The Celtic manager noted that Hibs are now fully professional, Hearts are currently a mixture of full-time and part-time and many teams including the likes of Aberdeen and Partick Thistle are investing in developing their women’s team as the game in Scotland seeks to grow. That incidentally is how we can prevent losing our top stars in the future. 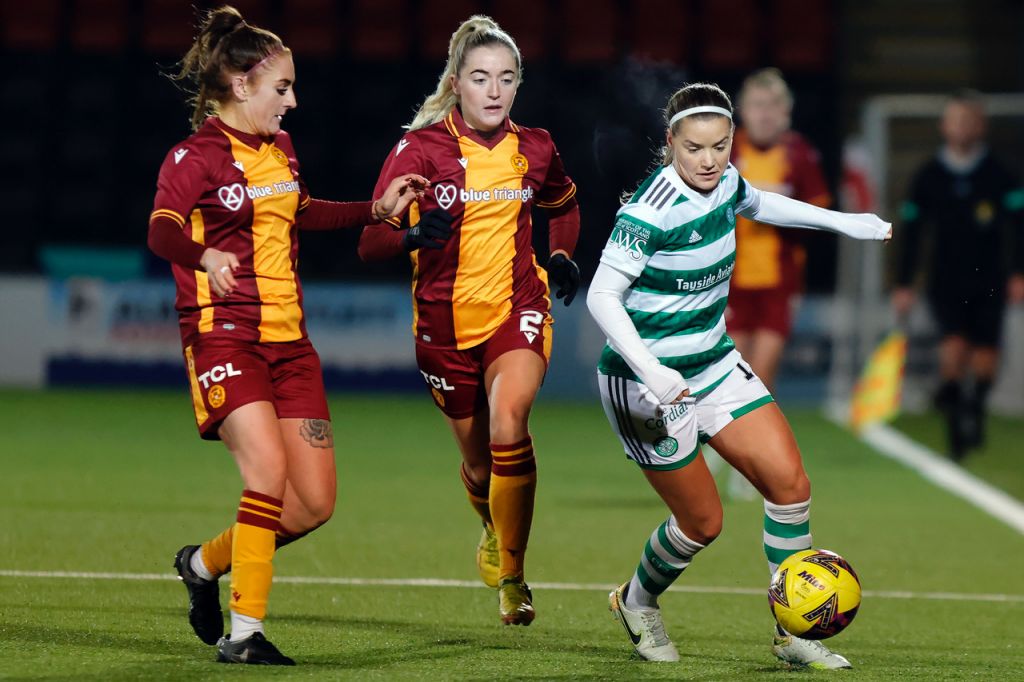 Looking back to the game in midweek Alonso told us that the Celtic coaches set four tasks for the team and on Wednesday night and they failed in all four, a frustration for all concerned, as the team had been playing so well throughout the season and nearly alway achieved all four targets, or at least come very close. This is the first 0/4 scoreline on a night where nothing at all went right for Celtic.

The fixture clash with Celtic v St Mirren game certainly did the Celtic FC Women side no favours whatsoever. Many supporters of the women’s team are also season ticket holders at Celtic Park so missed the match at Airdrie’s Excelsior Stadium where remarkably the match was played without ball-boys and ball-girls due to this fixture clash that can’t surely be repeated. 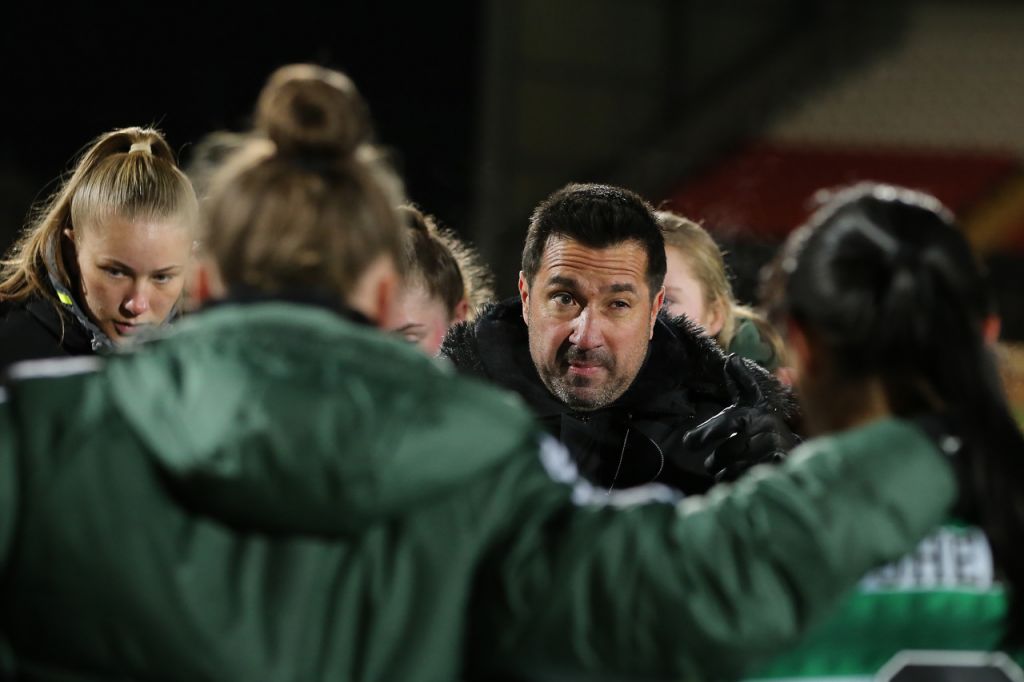 For the trip to Edinburgh a week on Sunday, Celtic FC Women will have Liv Chance back from international duty with New Zealand and new signing Hana Kerner should be available, as indeed should our new centre-forward who should be confirmed and officially announced shortly. Next weekend incidentally sees current Champions theRangers host the SWPL1 leaders Glasgow City, so something must give there.

“We only think about ourselves,” Fran Alonso told us and we have two very difficult games to think about starting with Partick Thistle on Sunday. We’ll concentrate on that match and getting back to playing the way we can and hopefully get the three points.

“Then we can turn our attention to a difficult away match against Hearts, who got the draw with (the)Rangers last week and in their away game against (the)Rangers were very unlucky hitting the woodwork to deny them a point in that match.” 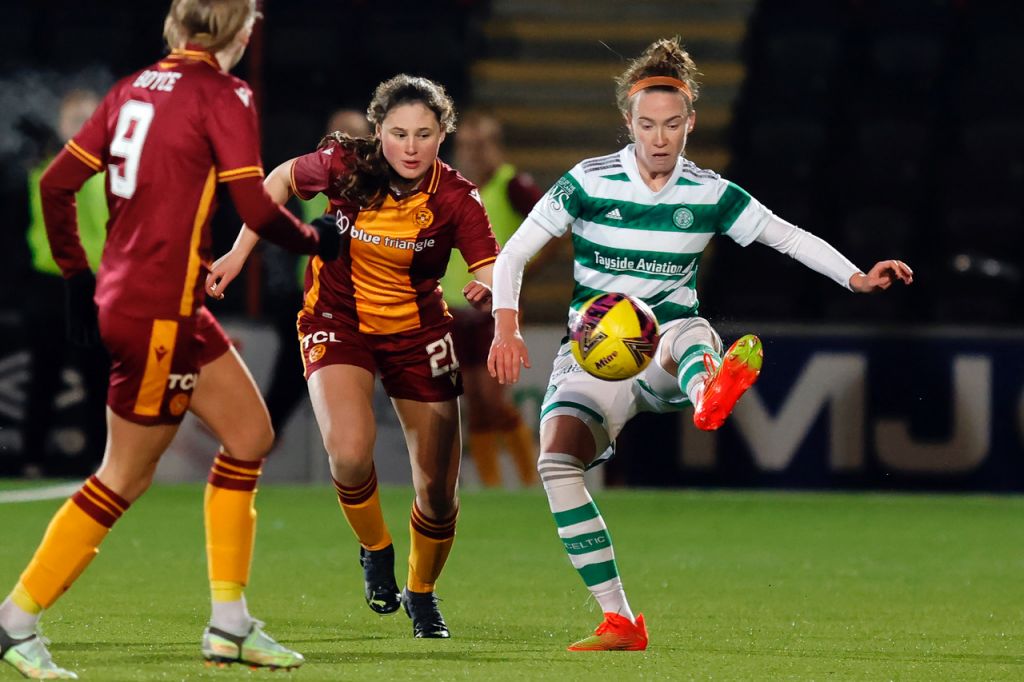 There’s no video with Fran Alonso on Celtic TV’s You Tube as the Celtic manager was busy elsewhere, as the work to bring in the new signings continued inside Celtic Park. But we did speak to Fran on the phone and he’s confirmed the good news that definitely one and probably two more signings are imminent and will be Celtic players before the window closes at the end of the month. 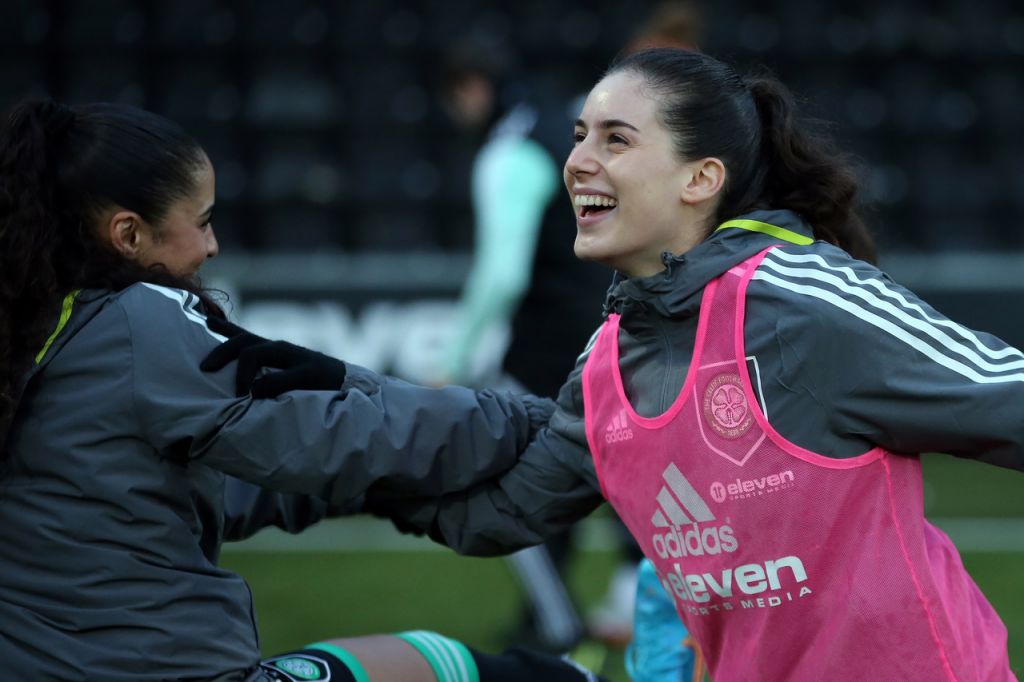 We also spoke to Jacynta this afternoon and she spoke about her best pal Clarissa Larisey leaving, them keeping in touch, what’s happening with her international career with Australia and what she’d do if she’s attacking the goal only for the her way to be blocked not by a big centre-half but by a match official…)this actually happened,  Jacynta shared here views with the referee and incredibly was given a straight red card and a two match ban), so her response today is really funny. 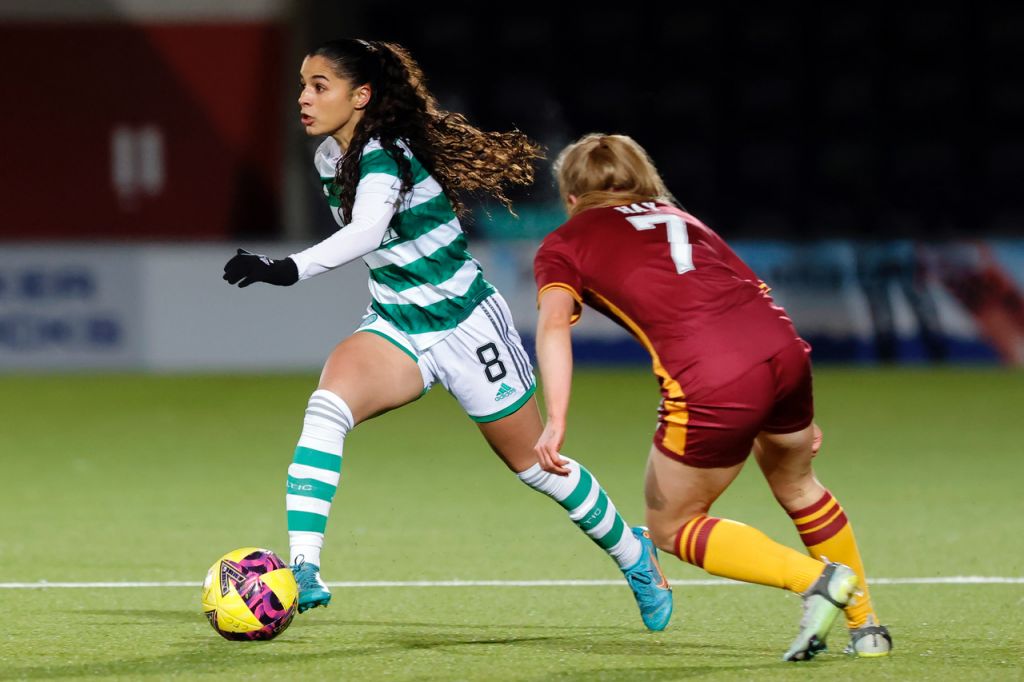 🗣 “It’s already happened and we have focus on Partick Thistle who are a really good opponent and a tough team to beat.”

Why not get along to the Celtic v Partick Thistle match on Sunday afternoon – 22 January – at the Excelsior Stadium in Airdrie? Kick-off is at 4.10pm and tickets are priced at £8 for adults and £4 for concessions, available HERE.

🎟 The Ghirls are back at the Excelsior Stadium this Sunday to face Partick Thistle and tickets are available to buy online now.

With the Celts determined to secure a vital three points, it’s not one to miss! ⬇️#CELPAR | #SWPL | #COYGIG🍀