You are at:Home»Latest»Fabrizio Romano issues Carl Starfelt update after £4.2m bid from Celtic

Transfer specialist Fabrizio Romano has issued an update about Celtic’s pursuit of Rubin Kazan defender Carl Starfelt. The centre half was included in their starting XI for a friendly today as Celtic fans realised that a deal was not as imminent as had been hoped; however, Romano has said that an offer of £4.2m was made.

Although updating the Celtic support via his Facebook page, Romano said that Celtic have stepped down their pursuit until Kris Ajer’s future is resolved. 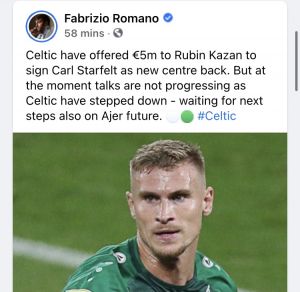 Celtic have reportedly been asking for £20m for Ajer, a fee that appears to have put off a number of suitors. However, so far the bids that have been listed seem to be around the £12m mark, which you would have expected to have been enough to seal the Norwegian’s Celtic Park exit.

Celtic need to get their business done promptly and that means selling as well as buying. If Ajer is not going to be interested in playing next season, he needs to be sold at the best possible price but that needs to be negotiated instead of the apparent ‘take it or leave it’ stance that talks for Ajer appear to have stalled at.

Starfelt is still a target of the club and you would think that Postecoglou will return for the player but it is not overly helpful for the preparations for the new season that signings are not coming in the door because we cannot sell our best talent.