Transfer specialist Fabrizio Romano has said that Josip Juranovic is expected to leave Celtic this summer. The Italian journalist took to Twitter to claim that the Croatian Internationalist is expected to leave after just one season in Glasgow. This is a shocker for Celtic fans who were hoping to see more from the full-back after an excellent start to life in Glasgow.

It is a worry as the team appears to be settled going into the next campaign and JJ was a big part of that success, playing in the system that the manager wants. The player posed in the new away shirt, suggesting he would be here for the new campaign and, until now, there weren’t any worries that we would be needing to find a new RB yet. 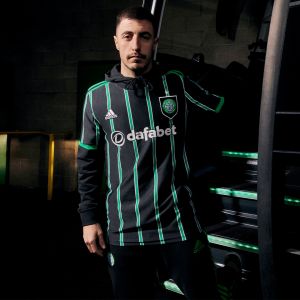 The player responded to speculation in early June as noted by Celts Are Here’s Craig below. However, given his performances for France, there will likely be interest.

“I enjoy Celtic. I started my career, I won the championship in Poland – now in Scotland. I can’t wait to get back to Glasgow again for the new season. It is great for me at Celtic.

“We’ll see, it’s not up to me! I’m happy at Celtic.” pic.twitter.com/bBoCtu1DfH

Juranovic has been linked with a variety of teams already since Celtic stole him for £2.5m from Legia Warsaw. It was shrewd business and he is comfortably the best fullback in the league. Celtic certainly do not need to sell and you would imagine that the club are saying to the player that The Champions League provides him a better platform than any to prove his worth to some of Europe’s top teams.

The Suez Crisis, Celtic’s Cup Joy and Wedded Bliss for Willie Fernie and his Bride, Audrey Douglas
“Harry didn’t mind heading up the park and having a skelp at goal,” Kenny Dalglish
“Willie Fernie was a genuine player, and a perfect sportsman,”Tom Campbell
Previous ArticlePhoto Of The Day: The Flags Are Out For Celtic
Next Article Better News As Celtic Inform Benfica Of Jota Intentions