You are at:Home»Latest»FC Midtjylland v Celtic – team news, kick-off time and where to watch

Celtic face FC Midtjylland tonight in the second leg of the Champions League Second Qualifying Round. The winners will progress to play either PSV Eindhoven or Galatasaray in the next round but the tie is evenly poised at 1-1 from the first leg in Glasgow. Celtic go into the match with the added boost of UEFA scrapping the away goals rule ahead of this season, which means that Ange’s side know that a win on the night will be enough to make the next round.

Celtic are without Kyogo Furuhashi and Carl Starfelt, the new signings are still unavailable due to isolation following travel from Amber List countries. Neither are registered for the game, either. Nir Bitton is suspended after being sent off in the first leg. Christopher Jullien is out for the next few months, at least, meaning Ange Postecoglou will be looking at partnering Dane Murray and Stephen Welsh at the back, even if they look a bit shaky against West Ham at the weekend.

Leigh Griffiths is out with a calf injury but Albian Ajeti has returned to the squad for the game in Denmark. Olivier Ntcham is not expected to be involved after the manager said at the weekend that he was far away from being ready to play. Wingers Mikey Johnston and Karamoko Dembele are still out with injuries. 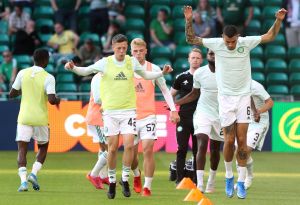 The game in Herning at the MCH Arena kicks off at 18:45 (Celtic Park Time).

The game will be on Premier Sports, with coverage beginning at 18:15. For Celtic TV subscribers outwith the UK & Ireland, the game will be shown on the club’s in-house broadcasting platform.

It is a vital game for Celtic but ultimately, it will not be the fault of the young team that Postecoglou has at his disposal if we are beaten, the legacy of Lennon & Lawwell will be to blame that McKay and Postecoglou inherited such a mess. Hopefully, the manager and his team can pull through tonight and get some much needed recruitments in over the next week.