You are at:Home»Latest»‘Fit, strong and sharp in training,’ Johnston is ready for Airdrie

MIKEY JOHNSTON is featured on today Match Day Programme for the Scottish Cup tie against Airdrie which signals the end of the winter break.

Mikey was in good goalscoring form in the home matches he started last month and he’ll be looking to pick up where he left off in the 5.15pm kick-off. The young striker is likely to start today’s match on the bench.

Mikey, who looks like having an exciting future at Celtic, has been speaking to the club’s media team for today’s programme, and recalls he was unlucky enough to pick up an injury at this stage of the Cup competition last season against Brechin. That effectively ended his season so the 19 year old is hoping for a little more luck today.

“I picked up an injury in the first Scottish Cup game last year, so I want to make sure that doesn’t happen again because I have targets I want to hit in this next part of the season.

“Being out for a while was frustrating, but thankfully I’ve had the chance to be in the team again and now I can move forward.

“At the start of the season I then had a few setbacks with an injury to my hamstring,” Mikey said. 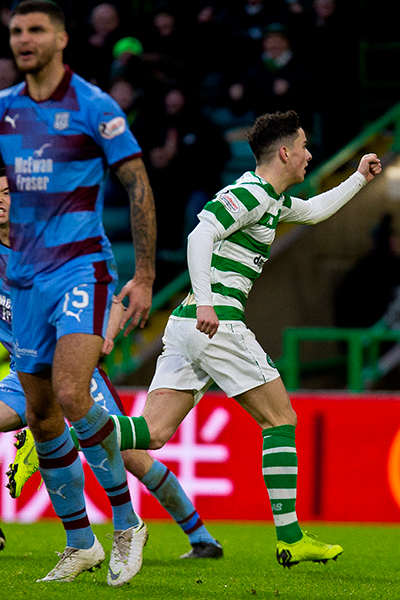 “But I got back on track towards the end of the year. I managed to achieve some of the things I wanted to before the break so that made it a good end to the year.

“If I hadn’t got in a few goals and some games, I’d have been quite disappointed.

“I hope I can get another game under my belt early on now that we’re back playing games. This would be a good first game to come back into, with this being the Scottish Cup, and hopefully I can play my part in trying to get us through to the next round.

“I’m feeling fit and strong so hopefully I can carry that into the matches now and try and get a run of games.

“I’ve felt really sharp in training this week so we’re all looking forward to just playing again and building up a run of momentum.”