You are at:Home»Latest»Fly the flag to remind them that our history, our colours and our club remain strong

On Easter Sunday Celtic face theRangers at Hampden for a place in the Scottish Cup Final, and if successful the barely believable possibility some nine months ago of a Treble of domestic trophies will move ever closer.

The game is the penultimate stage of the flagship tournament for the SFA, and in a ground holding a near 50/50 split of supporters as well as string of the association’s hangers on of course, there are few more marketable opportunities than a Hampden full house and a Glasgow Derby to showcase Scottish football – and of course have the SFA take centre stage. Scotland’s two best teams this season will face off in a game that must result in a winner on the day – and the two biggest supports in Scotland will supply the colours, the noise and the tribalism. 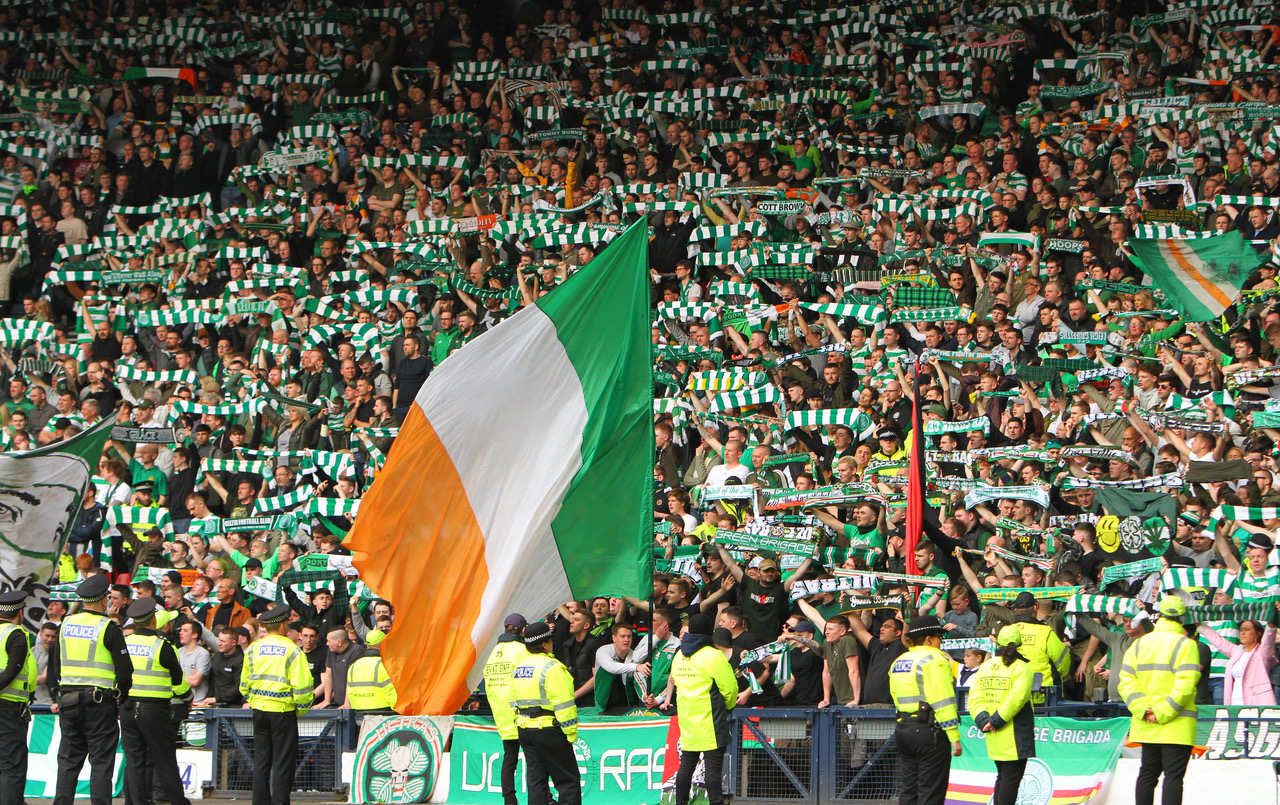 From a Celtic perspective much of the colour and noise begins with the Green Brigade, as such it’s disappointing to hear a decision was reached to bar the North Curve, and their counterparts on the other side of Hampden from displaying a Tifo this weekend.

That group however have taken to social media to encourage the Celtic support to bring the colour by way of the Irish Tricolour and fill the void of a barred Tifo on Sunday afternoon.

‘For Sunday’s match, the Celtic support has been denied the opportunity to rally behind the team with a tifo. We therefore encourage all fans to play their part by bringing the Irish tricolour to the match.

On Easter Sunday, we go to war under the flag of Ireland.’

For Sunday’s match, the Celtic support has been denied the opportunity to rally behind the team with a tifo. We therefore encourage all fans to play their part by bringing the Irish tricolour to the match.

On Easter Sunday, we go to war under the flag of Ireland. pic.twitter.com/sLicI0iAvZ

It’s a call to the support that has already caused debate and understandably so. After all the choice of the word ‘war’ at this moment in time is controversial to say the least as Europe sees the real thing and the barbaric consequences are there for all of us to see.

Even from a domestic standpoint the wording appears inflammatory given the events at Ibrox a fortnight ago, where Celtic supporters and player faced a barrage of missiles, our goalkeeper risked injury with the throwing of broken glass onto the pitch, and a member of staff, having been struck by a bottle, is now permanently disfigured.

After refusing tifo access for Sunday, Hampden have advised that they will now enforce strict conditions on entry of flags. This will include 1 flag per person as well as size and material restrictions.

We call on all fans to ignore these restrictions and proudly fly our flag. pic.twitter.com/cZM1S9Ma72

As such the ill-judged use of words like ‘war’ appear as poorly timed as they are out of touch. After all there has been a great deal made of Celtic suffering from the two cheeks of the same backside coverage in the mainstream press, whereby too many of Scotland’s journalist chose not to lay the blame for the Ibrox threat to safety at the door of the club responsible, instead choosing to make it an ‘old firm’ issue. For Celtic supporters to now appear to encourage further conflict by appearing to make a call to arms it could be argued simply emboldens those who do believe it’s a two-tribe issue and allows them point to evidence from our own support in mitigation. 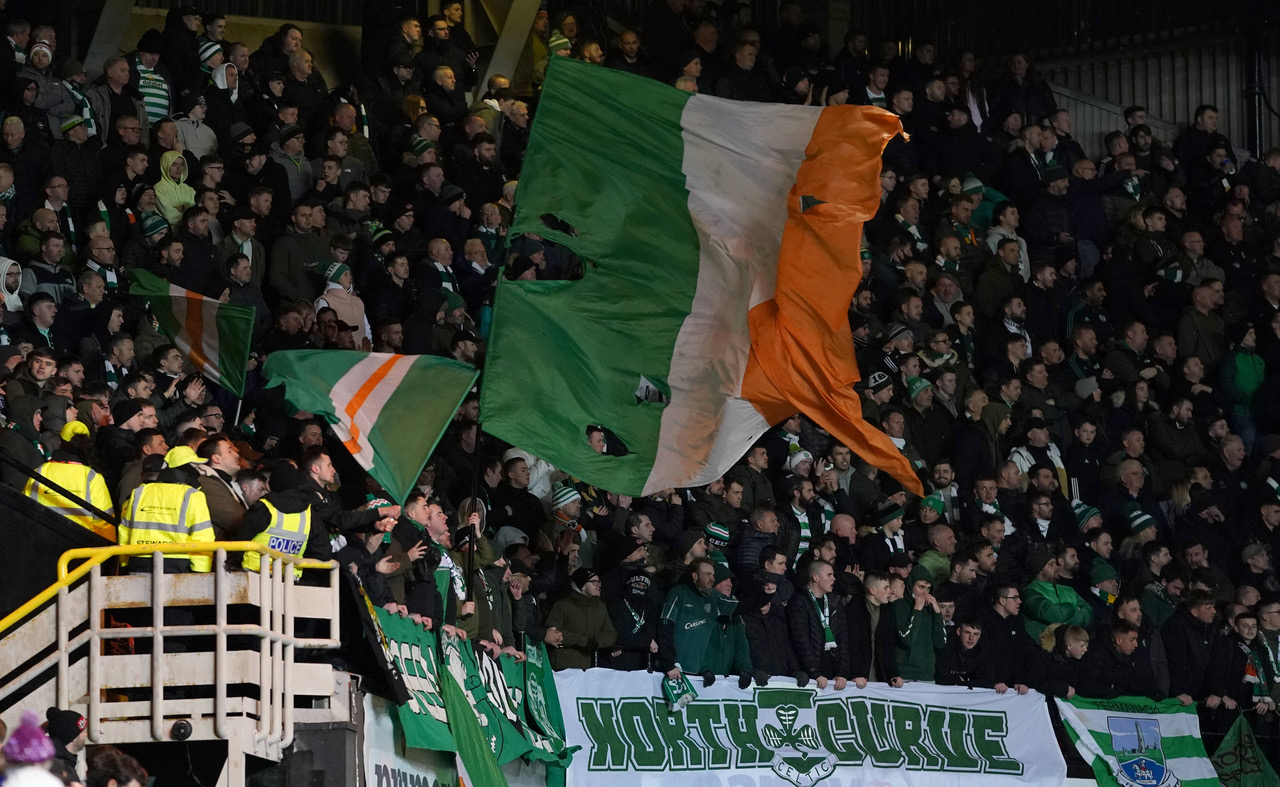 Yet as much as the choice of words is questionable to say the least, I don’t believe the North Curve are stating they are going to war with the other side of Hampden on Sunday, despite opening themselves up to it being construed that way. Instead with the banning of their Tifo, no doubt with a Tricolour theme to it, this call is more than likely a reaction to the organisation that will host this semi-final and whose tournament it is.

The banning of the Tifo will no doubt anger the North Curve and no doubt the lessons from history will have them believe the decision to bar their display is a historical disdain for the flag of Ireland being flown in Scotland – and they’d be right.

After all we all know just how close a 1952 vote came to Celtic being banned from flying the Irish Tricolour at Celtic Park and we know when Celtic moved to Hampden for a season as Paradise was rebuilt, that the SFA had no wish for that flag to be flown at Hampden, indeed as Celtic moved in as tenants that very subject matter nearly forced Celtic to look at alternative options.

For a Tifo display to be barred for this weekend is another sign to some of the SFA’s establishment persona being magnified, and as such when the North Curve talk of ‘war’ perhaps we need to consider the targets are those who reside in the house we visit on Sunday and who over many generations have shown little more than disdain for the history, culture and colours of our club.

As such I’d fully support the North Curve and their call to Celtic fans to fill half of Hampden at least with a flag our hosts have historically tried to drive out of Scotland. In fact, it’s entirely fitting we do, considering the historical issues we’ve had with the organisation who will host this weekend’s semi-final, and one who will make a fortune from Celtic bums on seats alongside the sponsor and media interest that follows us.

It will ensure a visual reminder of a club who will never forget its roots is flown proudly, and reminds those in the SFA that Celtic remain the strongest club in the country, despite the best attempts of the governing body over the years to undermine us.

The use of the word ‘war’ has rightly been condemned in terms of its timing and its apparent inflammatory nature, but when it comes to battling the SFA, the flying of the Irish Tricolour has often been a source of ire for our hosts and we all know why. As such to see it flown by thousands on Sunday in the home of the SFA, as they fill the seats in the main stand, and to then hopefully to see it flying in celebration at the final whistle, is something we can all get behind.

After all the use of the word ‘war’ may have been poorly judged but Celtic’s battles with the SFA and the flying of the Irish Tricolour is a conflict that has been going on for decades. This weekend’s game is the perfect setting to remind them all, despite their best attempts to keep us down, that our history, our colours and our club remain strong, indeed where better to remind them of that fact than Hampden on Easter Sunday.

Now sit back and watch this…

Video: A weekend trip to Scotland, watching Glasgow Celtic putting on a show…

Low-key Celtic have plenty to shout about ahead of Balmoral trip
“He is no spring chicken anymore. But, he has still shown he has the quality,” Simon Donnelly
Ange Postecoglou’s special surprise for young fan in Sydney

Previous Article1954: The road to Hampden ends in joy for Celtic but a 6-0 humiliation for Rangers
Next Article “He loves the club, he loves football and, most importantly, he loves the people”