You are at:Home»Latest»Football after Celtic – Evander Sno

Yesterday upon writing about Thomas Gravesen’s generous donation to the Celtic FC Foundation my mind wondered back to the Gordon Strachan era, one that was mostly successful but also contained the heartbreak of letting the ’08/’09 season slip through our fingers.

After being 7 points clear at one stage we really should have won the league but somehow managed to end up finishing the season 4 points adrift of eventual champions Rangers. A player who came to my attention in Strachan’s early years was someone who actually ended up taking star signing Thomas Gravesen’s place in the team, Evander Sno.

The man named after former World Heavyweight champion and boxing legend Evander Holyfield signed for Celtic from Dutch side Feyenoord in 2006. At the time he was considered a very promising young prospect having starred for The Netherlands youth teams for many years. 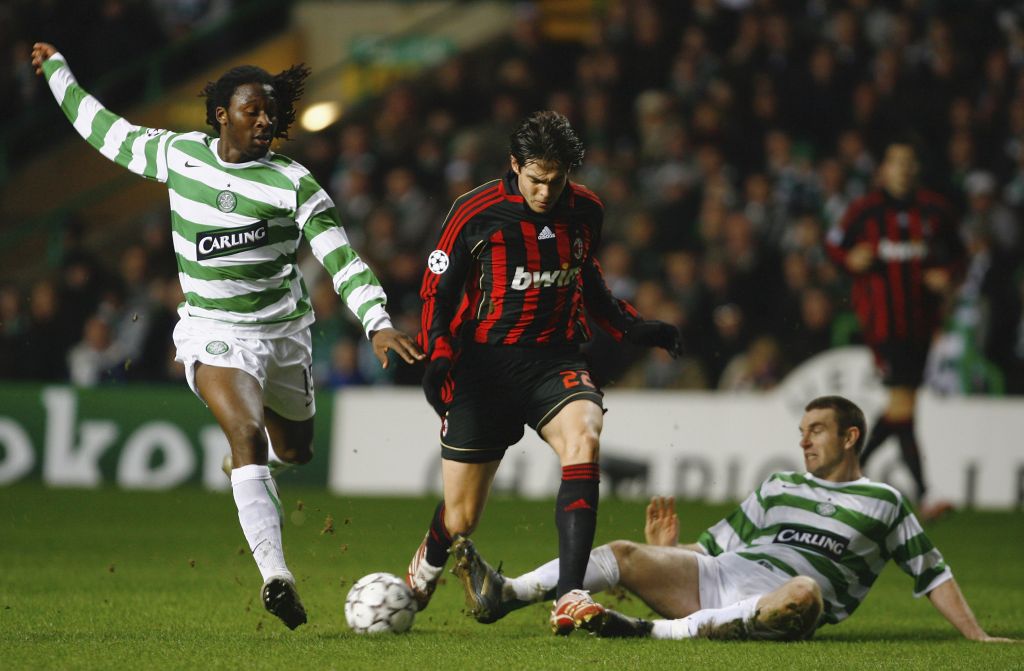 He made his full debut in a League Cup 3rd round victory over St Mirren, drawing praise from Gordon Strachan. His first appearance against Rangers was during Celtic’s 2–0 win on 23 September 2006 where Gravesen scored his first Celtic goal, replacing Shunsuke Nakamura during the latter stages of the match. In November 2006, Sno scored his only goal for Celtic against Hibernian in a league game.

His form was so good for Celtic during his first season not only did he displace Thomas Gravesen from the team but he also won a call up internationally by The Netherlands for a game versus England. Evander didn’t get on the pitch during the match and unfortunately this was the closest he ever got to getting a cap for his country.

During his first season Sno looked like he could end up being a mainstay in the Celtic defensive midfield role for years to come. He was strong physically, assured in possession and technically good with the ball like many players who came up through the Dutch youth system. Unfortunately the following season he struggled with a lack of form which affected his confidence and he soon dropped out of the starting 11 and never really got back to the levels of the previous season. 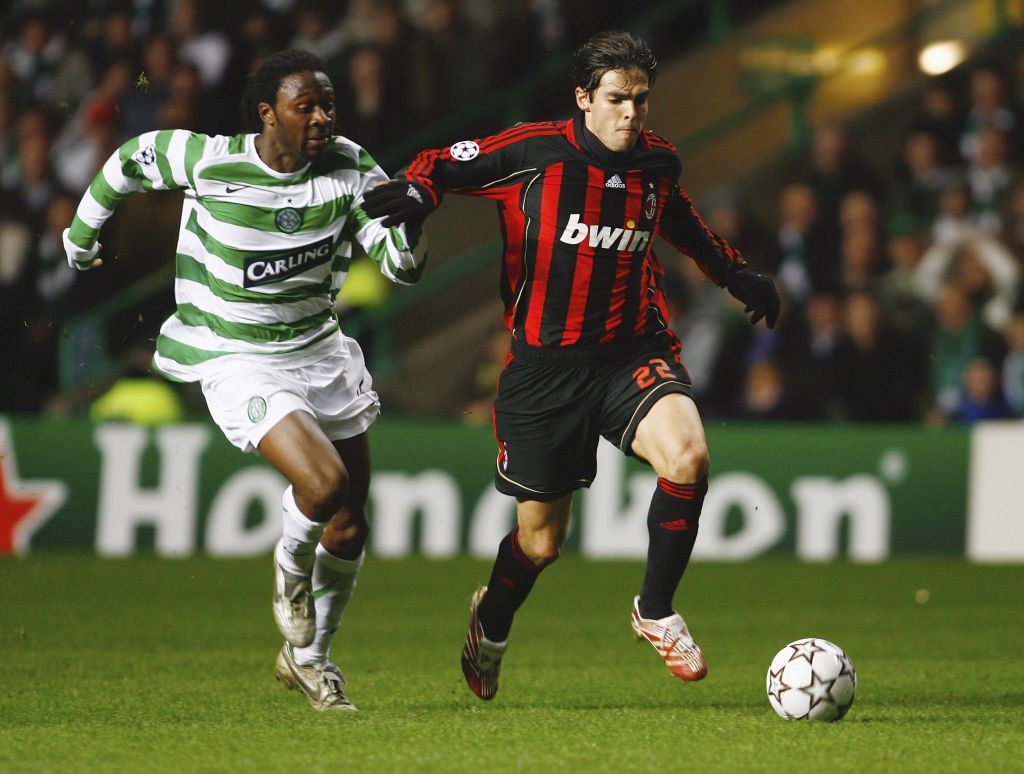 Evander Sno of Celtic tangles with Kaka of AC Milan during the UEFA Champions League Round 16 first leg match between Celtic and AC Milan at Celtic Park on February 20, 2007. (Photo by Mark Thompson/Getty Images)

I remember at the time Sno became a favourite of the ‘boo boys’. Whether I was at the games or watching in the pub I always remember if Sno made a mistake people where always quick to make their feelings known about him.

Yes, he was often ponderous on the ball which frustrated the fans as they wanted it played quicker but when he rushed because of the fan reaction that’s when he often made mistakes. Often I think we all forgot how young he was at the time to be handed such an important role in the team and should have been given more support. Essentially he was still learning his trade. Nir Bitton is someone who has a similar style as Sno had back in the day and can also receive pelters because of it but gladly Nir is a lot more experienced than Evander and handles it well. 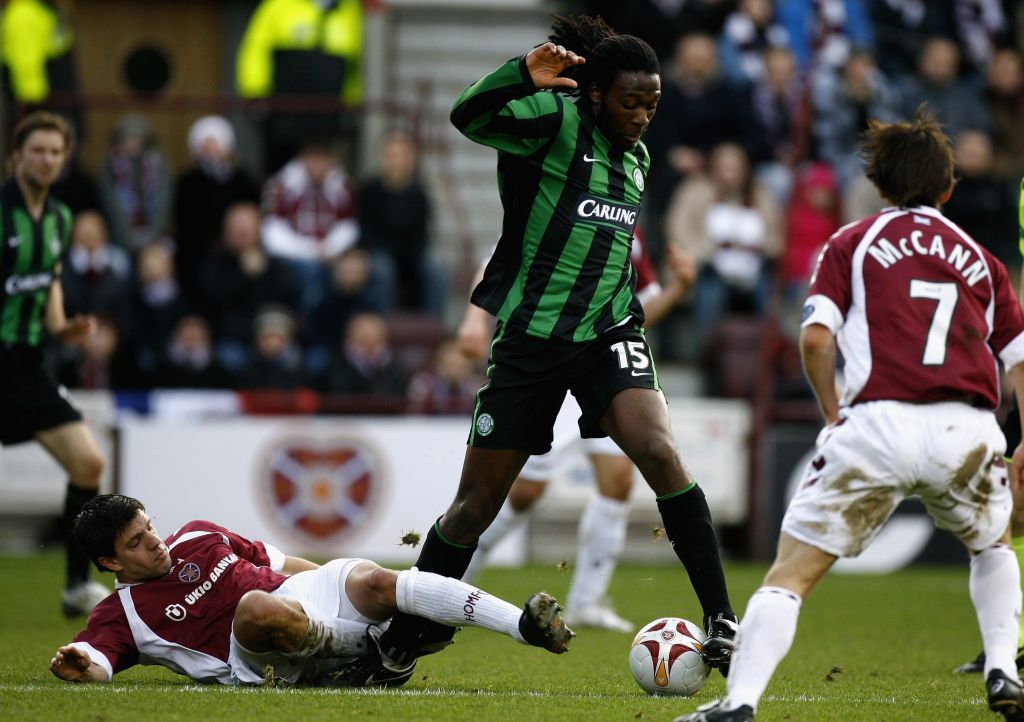 Takis Fyssas of Hearts tackles Evander Sno of Celtic during the Scottish Premier division match between Hearts and Celtic at Tynecastle Park on January 14, 2006. (Photo by Jeff J Mitchell/Getty Images)

During his time at Celtic he managed to pick up two league winner medals and also starred prominently in the Champions League even starring in the last 16 matches against AC Milan. Success wise Evander was never to reach the heights he hit with Celtic after he left the club and signed a 3 year deal back home with Ajax. During his first year back Sno was in and out of the team never able to establish himself as a proper first team player.

At the beginning of his second season with Ajax he was loaned out to English club Bristol City were he got a lot more game time even managing 3 goals during the season. He headed back to Ajax in the hope of working his way back into the first team set up but was unfortunately demoted to the reserves.

It was during a match playing for the reserves that Sno suffered a cardiac arrest. It took the paramedics ten minutes to resuscitate Sno on the pitch and he was then taken to a hospital in Arnhem. It was expected that a long period of recovery was going to lie ahead, but amazingly he marked his return by appearing in a reserve friendly in November of that year. No direct cause for the cardiac arrest could be found and as a precaution he had an internal cardiac defibrillator inserted. 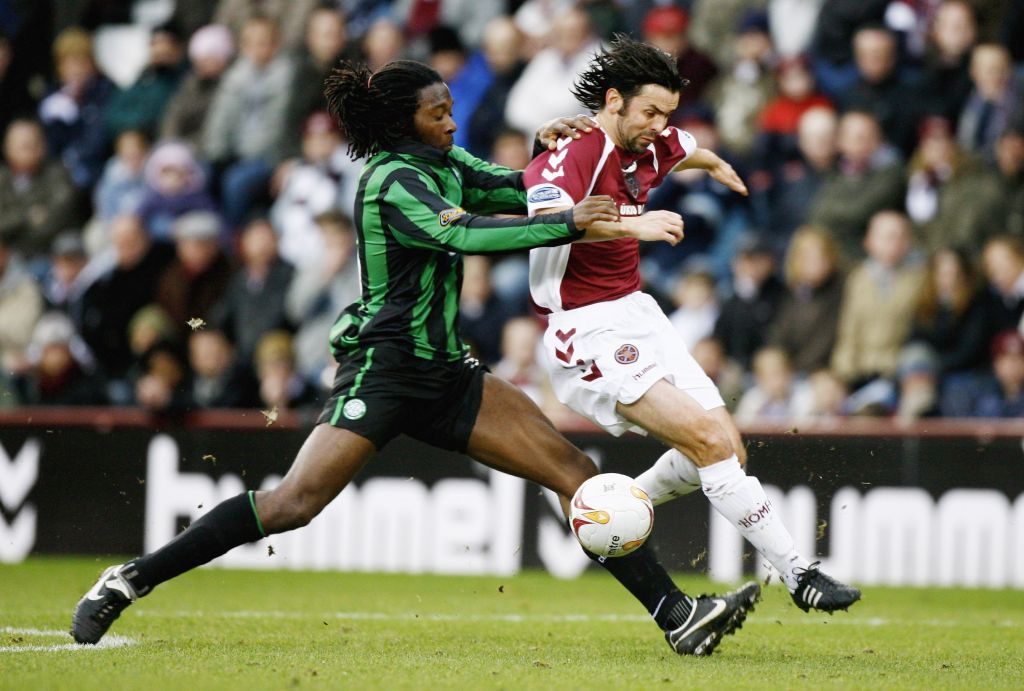 Paul Hartley of Hearts is tackled by Evander Sno of Celtic during the Scottish Premier division match between Hearts and Celtic at Tynecastle Park on January 14,2006 (Photo by Jeff J Mitchell/Getty Images)

Shockingly two years later, having just signed for NEC from RKC Waalwijk where he had impressed the previous season, Sno had another cardiac arrest on the pitch. Luckily due to previously having a defibrillator inserted he was able to actually walk off the pitch of his own accord.

During his later years he would go on to play for old club RKC Waalwijk on two more occasions as well as spells at Westerloo, ADO Den Haag and finally DHSC.

Evander Sno is a player many may have forgot due to only being at the club for two years but by winning two league titles and helping the club reach the last 16 in the champions league he had more success in his short time than many managed to achieve in the hoops. It’s good to know that even after his health scares he was able to play on into his 30s, getting to retire on his own terms.

“Money wasn’t going to further my career. Coming here has boosted me as a player, as a person,” Matt O’Riley
SPFL confirm World Cup Winter Break starting mid-November and League Cup Final moved to 26 February 2023
Celtic bound Matt O’Riley: “He’s having a great season at MK Dons and has caught the attention of Denmark”
Previous ArticleFormer Celt Peter Grant earns Pars vote of confidence
Next Article How away fan update could result in increased allocation for Celtic’s Motherwell trip