You are at:Home»Latest»“For two years he was a genius,” McGarvey on £90-a-week Nicholas, offered a tenner pay rise by Celtic

Celtic Historian David Potter’s excellent mini-series this week on The Celtic Star telling The Charlie Nicholas Story concluded this morning. There’s one point though that we’d like to make in clarification because it’s always better to get as close to the actual facts as possible.

David’s opening paragraph in his concluding chapter in The Charlie Nicholas Story this morning reads as follows:

The irony here was that Nicholas, although he certainly did earn more in London than he would have in Scotland, would hardly have been a pauper with Celtic, who were offering to make him the best paid player in the club’s history. And what he made in money, he lost in goodwill and reputation. Had he stayed, certainly he would have become one of the greatest Celts of them all, on a par with Quinn, Gallacher, McGrory and Delaney.

The suggestion here on what Celtic were actually offering Nicholas is perhaps not entirely correct, listen to Frank McGarvey in his latest podcast with Tommy Sheridan discussing the wages that Nicholas was on at Celtic in comparison to himself and the offer that Celtic made to the young Celtic striker before his transfer to Arsenal.  Here’s what Charlie’s former striking partner had to say about the money that was on the table and the wages Arsenal eventually paid the young striker, perhaps the best player Celtic had developed since Kenny Dalglish.

“For two years he was a genius and that’s Charlie Nicholas,” McGarvey states.

“Can I tell you something, Charlie Nicholas was getting £90 a week at Celtic, and I was on about £330 a week at the time and he scored double the goals I scored that season and Celtic gave him a terrible offer – about £100 a week in the eighties and Arsenal came in with over £3000 a week.

“What Celtic fan would have said no to Arsenal?

“I’ve never given Celtic fans or the Jungle any stick in all my life,” McGarvey continues. “But when he came back up to play for Arsenal against Celtic, they booed him. 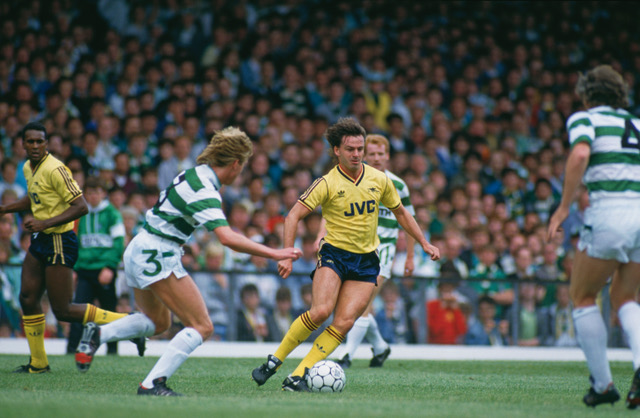 “Charlie has made all his money, not out of Celtic, he’s made his money from Sky and he’s made a fortune from them and good luck to him, he deserves every penny he gets as far as I am concerned.

“It was a privilege to play with Charlie for two years, to watch him score those goals.”

Frank makes these remarks on the current edition of the I’m Frank and He’s Tommy Podcast starting at approximately 40 mins, 40 secs,  which you can watch below.  If McGarvey was on £330 then Celtic’s tenner pay rise to £100 a week seems like an offer that Nicholas could simply not accept.

And even if Celtic did offer to make Nicholas the highest paid player at the club, how much would that have been worth a week? Let’s say £500. That’s still a very long way short of what Arsenal put on the table.

Few Celtic fans have much time for Charlie Nicholas these days but that is to do with his punditry rather than his playing days or indeed his decision to leave Celtic in 1983.

When he left Arsenal he went to Aberdeen rather than going back to Celtic but he eventually did find his way back to Paradise. He was however a shadow of his former self in the Hoops the second time round.

Ultimately Charlie was a genius who failed to realise his full potential in the game. That’s bound to be a cause of considerable frustration for him personally.