MANNY PEREZ has said that he wants to make an impact on the first team at Celtic but must first impress Neil Lennon. Perez was one of Brendan Rodgers’ last signings in January 2019 when the American right-back was signed on a three year deal; however, strict immigration laws have prevented him from getting the necessary paperwork to play for the Scottish Champions.

Speaking to the Scottish Sun, the 21-year-old is hopefully that the issues will be sorted out which will allow him to play for the Glasgow club.

“I’d love to try and get in the first team at Celtic. That’s my goal.

“If it is another loan, then we can have talks with different clubs and my agent, but I want to be at Celtic.” 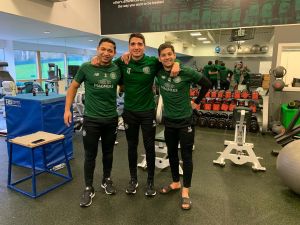 “I haven’t had a chance to play in front of Neil Lennon, so I’d love to get that opportunity if I can get a permit to get over there.

“It would be my job to show what I’ve got to him. Celtic flew me to Glasgow to run some tests when I had an injury, and I got to meet Neil and a lot of the players there.

“It was a little frustrating I couldn’t play because of an ankle ligament injury.

“But it was nice to be there for a little bit.”

The right-back is also confident that he has the ability to compete with Hatem Abd Elhamed and Jeremie Frimpong in the advanced role on the right hand side.

“I guess we could say I’m a right-wing back! I like to use my aggression and pace to get up the flank, and also provide good service for the forwards.

“That’s a big part of my game I’ve been working on.

“I watch a lot of the Celtic matches, and Jeremie and Hatem are talented players who have been doing well.

“There’s a lot of players in that position, but I’m up for the challenge and competing for a place.”

The American U21 is hopeful that he will return to Celtic next month but doesn’t know if the visa issues mean that he will be able to play in Scotland or be forced to make another loan move to the USA.

The promising youngster has been unable to make his breakthrough as a result of these issues but hopefully he can get the opportunity in the coming months.