Former Celtic duo Charlie Mulgrew and Aiden McGeady have been confirmed as guests for Open Goal Live at SWG3 in Glasgow. The event will be hosted by Si Ferry, Paul Slane and the rest of the Open Goal outfit as they talk all things Scottish Football and the World Cup.

The live show will be followed by Spain versus Germany on Sunday 27th November. Mulgrew, now in a player-coach role with Dundee United, will accompany another former Celt in McGeady – now at Hibs – as the players discuss the state of play in Scotland… as well as events in Qatar.

Mulgrew spent six years at Celtic, making 207 appearances and scoring 28 goals before departing in the summer of 2016 as Brendan Rodgers took over. 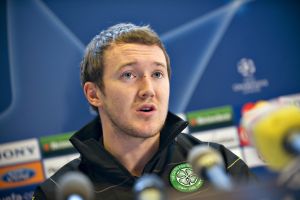 McGeady, a product of Celtic’s youth system, left Paradise in 2010 for Spartak Moscow. The player made over 180 appearances for Celtic and has enjoyed spells with Everton, Preston North End and Sunderland. After twelve years, McGeady made the return to the league that propelled him to become a £10m player. As Mulgrew arrived as Neil Lennon’s first signings, McGeady departed. The manager probably decided to sell him to help finance his rebuild ahead of the 2010/11 campaign.