After John Egan struck with a half-chance in the first half, Scotland huffed and puffed but Ireland held out. The second half greatly improved as Scotland attacked from the get-go and created chances. Jack Hendry started and finished a move, driving out of defence before heading the ball into the net. Ryan Christie converted from the spot with ten minutes to go. 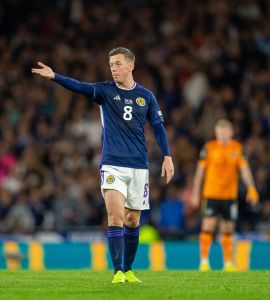 Celtic skipper McGregor was excellent again in the midfield for Steve Clarke’s team. As he so often is for Ange Postecoglou’s side, McGregor is right at the centre of this Scotland team working with his colleagues and instigating attacks. He was joined on the pitch by Greg Taylor and Tony Ralston were both brought on for Kieran Tierney and Aaron Hickey. The pair were solid as they helped the Scots get across the line.

The game in Warsaw during the week will see Scotland play for promotion and a Euro 2024 Play-Off. A draw in the Group B1 finale on Tuesday against Ukraine. The camp has resulted in a number of injuries and hopefully the Celtic contingent will remain unscathed.