You are at:Home»Latest»Former Celtic goalie set for return to Scottish football

Former Celtic and Scotland goalkeeper David Marshall looks set to make a return to Scottish football with a move to Hibs. A Celtic fan growing up, Marshall left in 2007 and has plied his trade in England ever since, enjoying spells in both The Premier League and The Championship.

The 37-year-old is said to be nearing a move to Easter Road according to West London Sport, who say that he will depart QPR as a free agent in the coming weeks. 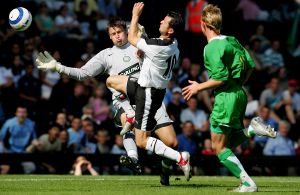 Marshall burst onto the scene with a captivating goalkeeping performance at the Nou Camp, earning Celtic a clean sheet in Barcelona that night, with some breathtaking stops. He followed it up with another fine display at Ibrox. The ex-Wigan goalkeeper started his career at Celtic before departing in 2007 after Gordon Strachan opted for Artur Boruc. It was expected that he would be the long-term No.1 at Celtic, replacing Rab Douglas but it never came into fruition with Boruc taking the gloves.

Marshall will likely look at the success of another ex-Celt, Craig Gordon, as a reason for returning back to Scotland. After an impressive spell as Celtic’s No.1, Gordon was displaced by Fraser Forster and left for Hearts where he has shone earning a Scotland recall. Marshall, who saved the crucial penalty in Belgrade to send Scotland to the Euros last summer, will see his own chance to stake a claim ahead of the World Cup in Qatar.