Former Southampton striker Kevin Phillips has said that Celtic need to sign Moi Elyounoussi on a permanent basis after another impressive individual season for Celtic, even if the team’s fortunes have not been as successful.

Speaking to Football Insider,  Phillips reckons that Celtic signing Elyounoussi is a ‘no brainer’ and that bringing him back to the club would likely appeal to the Norwegian as he is enjoying his football, is settled and fans are due to return next season.

“If Celtic want to challenge next season I think it would be in their interest to sign Elyounoussi permanently.

“He is a player who knows the club, he is settled, can score goals, so why would you not push the boat out and try and sign the player?

“Let’s not forget that there will be crowds back in that stadium next year. It’s an incredible place to play so I would imagine he’d like to stay.

“From a Celtic point of view, it is a no-brainer for me. Go and get him signed. Get it sorted out early and then you can go and concentrate on other areas.

“He has proven he can score goals in Scotland and Celtic will need him next season if they want to challenge for the title.” 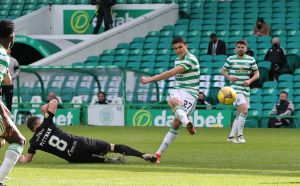 Celtic should target Moi, who has been brilliant in recent weeks, coinciding with a move to his natural left wing position.

Southampton are said to be willing to have him return to the club but are also open to selling him in order to raise funds. The Saints also know that they won’t recoup anywhere near the £16m that the paid Basel three years ago as Elyounoussi has just two years left on his deal on the south coast, which is where Celtic could swoop and seal a bargain.

Elyounoussi was signed at the end of the 2019 summer window and impressed in his first season despite a spell out with injury. Meanwhile this season, he scored 18 goals and assisted 7 in 40 appearances. Fans think that the club should sign the Norwegian if a deal can be struck as we have seen Moi at his best on a few occasions this season but ultimately it hasn’t been enough – maybe due to the management.

Under a new boss, Elyounoussi could flourish and Saints will be keen to get a deal done as it can open up their coffers to sign other players.

Previous ArticleVideo: On This Day – Celtic earn first win at Pittodrie in four years thanks to Mo Johnston
Next Article Celtic’s Wide-Bhoys and the 4-3-3 Formation that can Rattle the Rangers – So Fingers Crossed for Forrest