You are at:Home»Latest»Forster Here for Season, Despite Reports

Fraser Forster has confirmed that he will be at Celtic until the end of the season, contrary to reports he may be subject to being recalled by Southampton in January.

When the ‘keeper signed on loan in August, STV’s Raman Bhardwaj suggested that the deal included a clause whereby the English goalie could be recalled to St Marys.

However, Forster has denied this and confirmed that he will remain at Celtic until the end of the season, at least.

At the launch of The Celtic Festival 2020, the 31-year-old said – as reported by Andy Newport of the PA – he was oblivious to a recall option so as far as he was concerned, he would be remaining with the Scottish Champions.

“I don’t think there’s a recall so I think I’m here for the season from my side of things.

“I’m happy here and glad to be back here playing.” 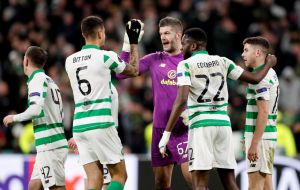 Whether Forster remains at Celtic beyond his term remains to be seen; however, on the face of it, it would appear that both the club and player would be keen on a deal being done. The only stumbling block could be wages, as it is reported that the big man is on £70k at Southampton.

Forster spent two years on loan at Celtic under Neil Lennon before the Irishman signed the ex-Newcastle stopper as the pair enjoyed a brilliant working relationship, which saw three titles in a row as well as an incredible European run – typified by the 2-1 victory over Barcelona.