You are at:Home»Latest»Forster Keen to Get Euro Fate Sealed

Fraser Forster has said that he wants Celtic’s Europa League fate sealed as soon as possible so that Neil Lennon’s side can focus on retaining the Betfred Cup and building on their lead at the top of the league.

The 31-year-old is determined for Celtic to beat Rennes on Thursday night and win the group with a game to spare. If Celtic win the group, they will likely face a team that finished second in their group.

Forster, as reported in The Daily Record, has said that the Celts have set the tone from the beginning with an impressive draw in Brittany and is hoping the Celts can finish the job at Celtic Park.

“From that first game against Rennes we’ve really delivered in the European matches.

“We’re in a fantastic position. Now we just want to go out and win the group and finish it off well.

“It would be great if we could do that in our final home game and kind of park it until after Christmas.”

Celtic are unbeaten in the Europa League this season, especially after winning both games against Serie A’s Lazio and gaining revenge against Cluj.

“It’s been a fantastic run of games in the Europa League and some fantastic performances.

“If you’d said at the start we were going to go and beat Lazio twice, people probably wouldn’t have believed it. The manner that we did it as well made it extra special.

“I think we’ve done very well up until now, but we want to finish the job now and win the group.” 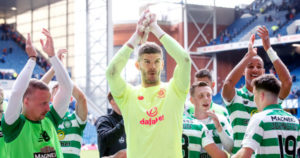 Forster has been a revelation since returning from Southampton on loan and Celtic will be hopefully extending his stay at the Scottish Champions this summer.

Previous ArticleMcGregor – Celtic are Bolder, Resemblant of O’Neill Era
Next Article ‘Bananas’ – The Green Brigade and the ‘bad taste replies from the wet wipe Celtic dahs’