You are at:Home»Latest»Forster Praised by Southampton Manager

Ralph Hasenhuttl has praised Fraser Forster after the big Englishman has impressed for Celtic since rejoining on loan in August. The Austrian, who’s Southampton side are in the relegation zone, also confirmed he wouldn’t be recalling Forster.

As reported in the Scottish Sun, Hasenhuttl was delighted that the 31-year-old had regained form after swapping the South Coast for Glasgow.

“First of all, I am very happy that he gets the chance to play after a long time.

“That he is a fantastic goalkeeper, I always knew, but for him it was important to get the chance to play and to get the games and self confidence back.

The ex-Leipzig manager also said that he had no interest in recalling Forster due to the three goalkeepers he currently has at his disposal – McCarthy, Gunn and Lewis.

“It is not the moment to think about that.” 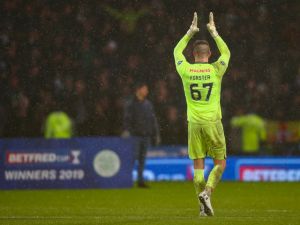 Whether or not the Englishman remains at Celtic after his loan deal expires in the summer remains to be seen; however his performances have been massively impressive and it is expected that Southampton will have taken notice.

Forster saved Alfredo Morelos’ penalty in the League Cup Final on Sunday and produced a number of blocks earning him the Man of the Match accolade.