You are at:Home»Latest»Frank McAvennie: “He turns Defenders In, Defenders Out”…£750,000 well by Billy McNeill

On this day in 1987 Celtic signed Frank McAvennie from West Ham in a deal believed to be worth £750,000, at the time a new club record transfer fee.

This was seen as quite the coup for manager Billy McNeill after McAvennie had made a name for himself alongside young English striker Tony Cottee in helping West Ham to finish third in the league, their highest ever finish. There was also rumour at the time that Graeme Souness had approached him to join Rangers at the 1986 FIFA World Cup which would have made him the first Catholic player to play for the Protestant club, but he refused due to being a Celtic fan. 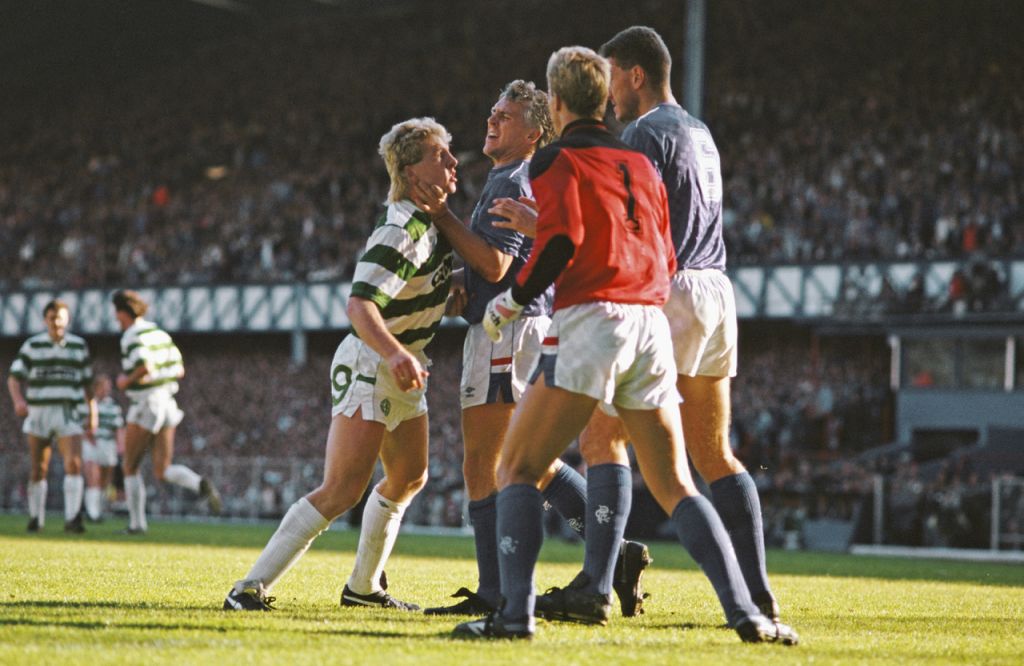 Celtic striker Frank McAvennie is held by the throat by Rangers defender Graham Roberts as goalkeeper Chris Woods and Terry Butcher (r) look on, Butcher, Woods and McAvennie were all sent off during the Premier Division match,a 2-2 draw at Ibrox on October 17, 1987 in Glasgow, Scotland.(Photo by Chris Cole/Allsport/Getty Images)

He made his debut in the 1-1 draw against Hibs at Celtic Park a day after signing on the 3rd October. Frank endured a relatively slow start to his Celtic career, making more headlines for his on field fracas with Chris Woods, Terry Butcher and Graham Roberts during the match against Rangers in November than he did for his goalscoring exploits. 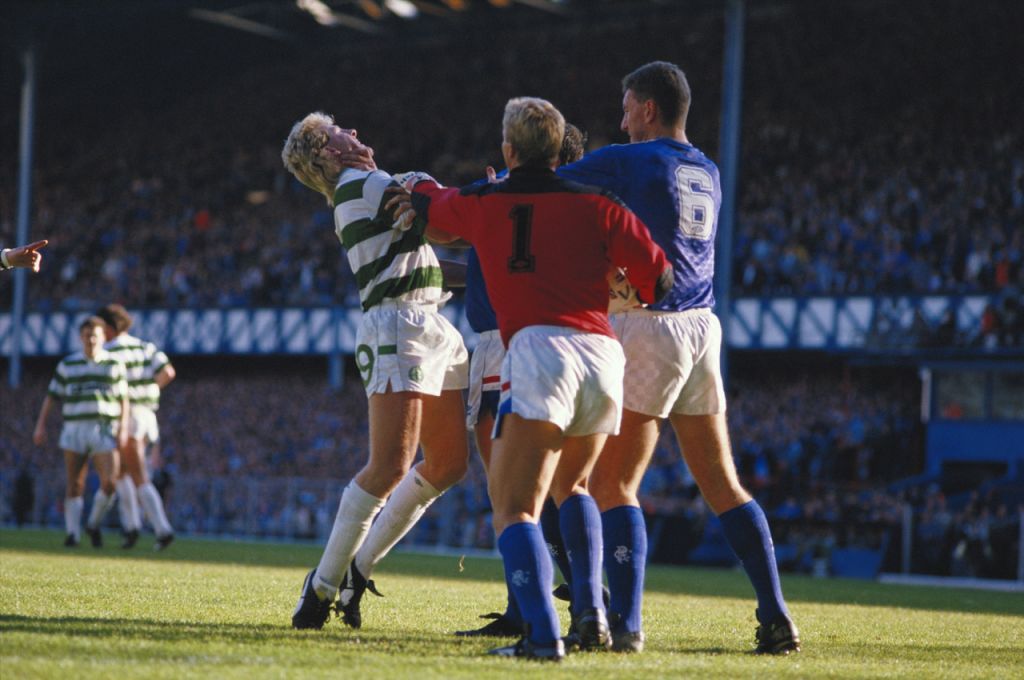 Frank McAvennie (left) of Celtic is grabbed by the throat by a Rangers player as Chris Woods  and Terry Butcher also of Rangers step in during the Scottish Premier League match at the Ibrox Stadium in Glasgow, Scotland. The Rangers player wassent off as Rangers and Celtic drew the match 2-2 Photo: Chris Cole/Allsport

He did eventually find his form in the hoops and went on to score 15 goals as part of a formidable trio, which included Andy Walker and Joe Miller, to help us to a league and cup double on what was our Centenary year. His two big moments in the hoops both included scoring a double. The first was in the January fixture against Rangers helping us win 2-0 and the second was against Dundee United in the Scottish cup final were his late goals snatched us the win from the jaws of defeat with the match ending 2-1. 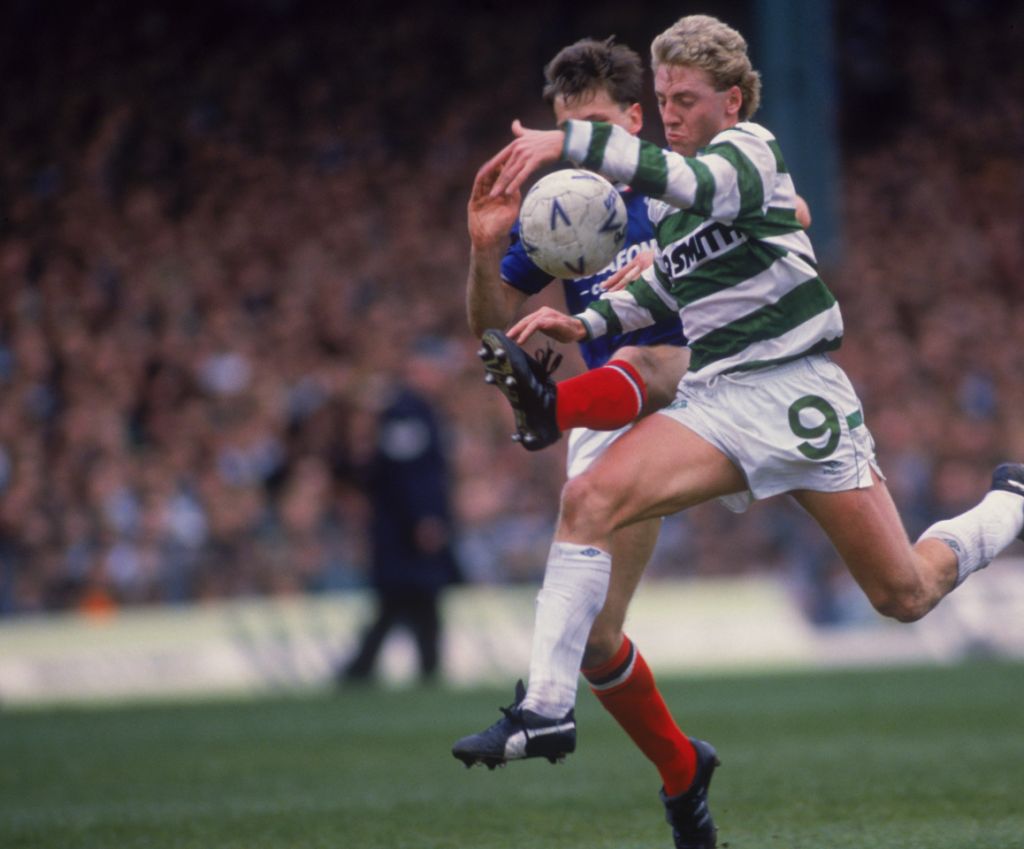 The next season wasn’t to be as successful for Celtic, who ended up finishing the season third behind champions Rangers and Aberdeen. McAvennie though was one of the very few players actually showing form that year, scoring 11 times before Christmas. However a broken arm sustained against Rangers in the new years fixture at Ibrox put an end to that. At this time he was also hankering for a move back to London to spend more time with his glamour model girlfriend. He also had a public falling out with manager Billy McNeill who finally relented and sold him back to West Ham for £1.25M.

Of course Frank returned to Celtic a few years later, signed by then manager Liam Brady, but this stint was rather anti-climatic. Scoring 9 times in 19 league games wasn’t a bad return but it still only managed to produce a third place finish for the club. The next season he scored once in 11 games under new manager Lou Macari who would then send him out on loan before cutting ties with him completely.

McAvennie was definitely one of the most popular and colourful players to pull on the Hoops in the 1980s, a real character, he will probably be remembered more for being one of our more controversial figures due to his off field lifestyle more than anything else even though he was a wonderfully gifted footballer, known for putting a proper shift in each time he graced the pitch. 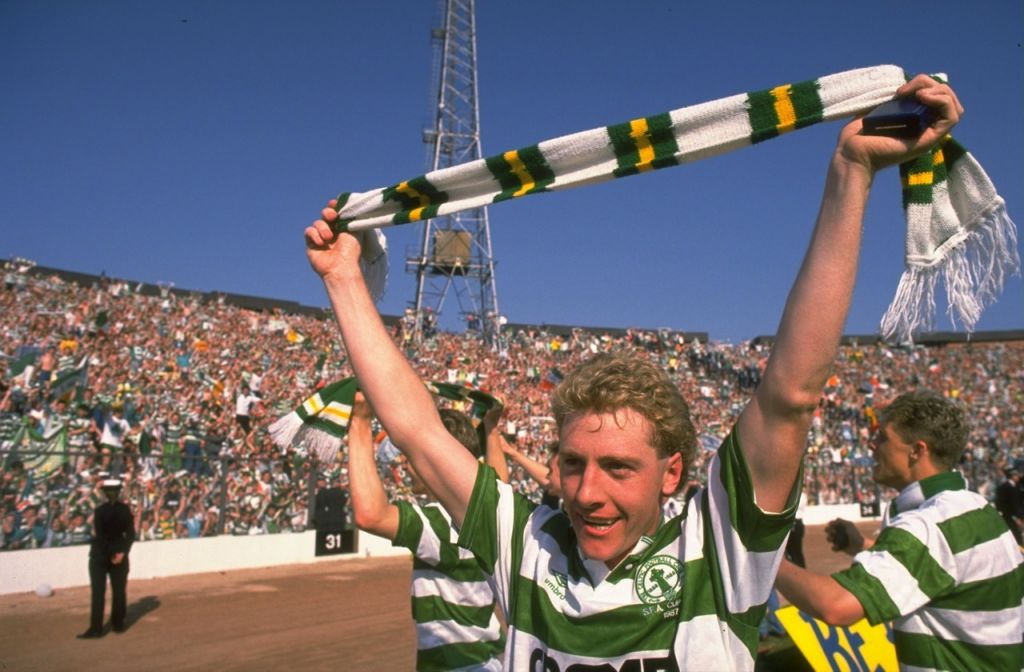 With the bleached blonde hair, flashy clothes, glamour model girlfriend and fondness for the party boy lifestyle, Frank truly represented the typical 1980s playboy footballer, as renowned for his scoring off the field as on it.

In more recent times, Frank has become a ‘pundit’ for often derided website Football Insider who also boast about getting ‘exclusives’ from the wonderful minds of Alan Hutton, Gabby Agbonlahor and the tedious ‘financial expert’ Kieran Maguire. The fact he uses the platform to often have a dig at Celtic has led to many Celtic fans losing respect for Frank but to be fair he is far from the only ex player to happily put the boot into his former club for a few pieces of silver. Whatever helps pay the bills eh Frank?

Previous ArticleCeltic B “will learn from their mistakes,” Tommy McIntyre
Next Article Celtic Captain insists Angeball will come good despite poor recent results