Fraser Forster has rejected a new contract from Southampton that would see the Englishman take a wage cut, opening the door to a Celtic return. According to The Scottish Sun, Forster has rejected the pay cut from The Saints potentially paving the way for a sensational return to Celtic.

Southampton are keen to reduce Forster’s large wage bill by getting him to agree to a new deal. However, he rejected this offer which may spur Ralph Hasenhuttl to look at offloading the former England goalkeeper on either a loan or a permanent basis.

A loan move would likely serve all parties well – Forster gets the money that he is entitled to per his contract, Southampton and Celtic share the burden of his wages and then Celtic get a first-team goalkeeper.

Celtic have played three goalies since Forster left. Two players that trained with Forster last season – Scott Bain and Conor Hazard become makeshift No.1s, replacing Vasilis Barkas who was meant to be the like-for-like replacement. The £4.5m arrival from AEK Athens was billed as Fraser Forster’s replacement but Barkas struggled to settle at the club as he struggled to make any positive impression and criticism was planted at his door.

Barkas looked as if he would be making it back into the first-team picture but a clanger against FC Midtjylland has the new Celtic manager looking for alternatives ahead of the beginning of the SPFL Premiership season. 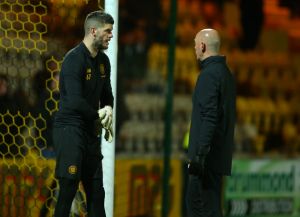 Forster is happy to let his contract run down but The Saints want him to take a wage cut to remain at the club and contest with Alex McCarthy as No.1 at the Premier League club. Forster rejected the chance to return last summer and the expensive contract that he has with Southampton is likely the reason that he stalled on a return.

There are also question marks as to whether Forster would suit Ange Postecoglou’s style at Celtic. The Australian clearly wants his goalkeeper to be able to distribute, which doesn’t suit Forster’s profile but he certainly makes up for it in shot-stopping.

Barkas’ weaknesses were plain for all to see last season but there had been a hope that we would see the much-improved player that convinced Nicky Hammond and Neil Lennon to pay £4.5m for him. However, the showings on Tuesday suggest that he may not be good enough to make the grade at the club. Mat Ryan was allowed to go to Spain without Celtic making a bid for the Australian Internationalist.

It is clear that the club need to sign another goalkeeper but whether it is Forster or not remains to be seen. A loan move would certainly make sense to all parties but whether this happens is another matter.

Previous ArticleReport says Crystal Palace considering Odsonne Edouard move
Next Article “Charlie Gallagher? What a Player” – The Rangers End emptied as the second half wore on