You are at:Home»Latest»Frimpong Desperate for Euro Debut

Jeremie Frimpong has expressed his desire to make his European debut after impressive performances in his first four appearances for Celtic. As he is not included in Celtic’s Europa League list, he would need to hope that Celtic qualify for the next round to give him the chance to fulfil that dream this season.

Whilst his colleagues prepare to depart for Rome, Frimpong spoke to the press, as reported by the Scottish Sun as the Celtic FC Foundation launched its 2019 Christmas Appeal with a £10,000 donation to the Glasgow Children’s Hospital.The right-back, however, is confident that the Bhoys have enough to get a positive result versus Lazio on Thursday.

“I’m desperate for the boys to qualify for the knockout stages, so I can experience Celtic Park on a European night as a player.

“If we keep playing like we have been playing then 100 per cent I’m confident we can get there.

“We’ve been playing well recently and hopefully the boys can do it in Italy.

“Lazio gave us a really tough game at Celtic Park, but we played really well and got a great result.

“Now hopefully we can go to Italy and win. We are top of the group and the team has broken a few records, so there’s no reason to think they can’t do it again.” 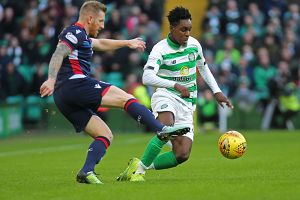 The atmosphere versus Cluj and Lazio has Frimpong convinced that he wants to be part of the team on the pitch, instead of with the fans on the sidelines.

“I had heard all about the atmosphere at Celtic Park and it’s lived up to my expectations. It’s been amazing.

“When it goes dark and then the lights turn green and I saw it for the first time I was like, ‘Oh wow!’.

“Then when the players come out of the huddle everyone is shouting and it’s so noisy. It’s so good.”

Frimpong has experienced Hampden Park when Celtic win, as well as Pittodrie; however, he is yet to experience a Glasgow Derby or a Cup Final but both will come next month and Frimpong is hoping to continue his progress and be in the manager’s thoughts come December 8th.

“It means everything that the gaffer trusts me. He knows I can do a job.

“I’ve been working hard and I was grateful he chose me for the semi-final against Hibs at Hampden.”

Frimpong, who signed from Manchester City, has impressed since arriving at Celtic after making his debut in the MOTM display versus Partick Thistle in the Betfred Cup.