You are at:Home»Latest»From Failed Electric Light Experiments To The First Set Of Floodlights Being Installed At Paradise On This Day In 1959

A myth has circulated the Celtic support recently regarding the club being British football’s pioneers of floodlighting. In actual fact, Celtic were relatively late to have floodlights installed at Parkhead and experiments with the system had taken place in England as early as 1888. The myth likely grew from the story of Celtic’s first attempt to host an illuminated match, during a friendly against Clyde on Christmas day, 1893.

The Christmas clash drew a crowd of 5,000 spectators due to the novelty of a football match taking place under the aid of electric light. Football had been played under artificial lights in Scotland before, particularly at the Edinburgh Exhibitions, but this was the first match of the kind in a club owned stadium such as Celtic Park. Some 16 arch lights were suspended above the pitch on wires, which were fixed to a dozen, 50 feet high, wooden posts. Meanwhile, almost 100 gas-jets provided additional illumination along the covered enclosure. 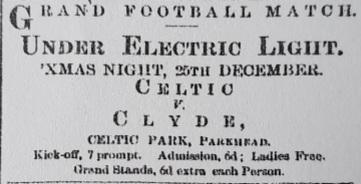 Apart from the obvious eyesore of multiple wires hanging across the pitch, the cables also tended to sag too low and interfere with lofted passes. Eventually, in January 1894, the issue came to a head when St Bernard’s FC were beaten 8-1 by Celtic in the Quarter-Finals of the Scottish Cup. After the match, St Bernard’s lodged a protest with the SFA, regarding the ball striking the electric lighting wires. By virtue of the fact that the ball had only struck the wires twice during the game, St Bernard’s withdrew their protest, but maintained that their initial objection had been based on principle. Taking note of the clear failure of night time football at Celtic Park, the club swiftly abandoned the notion.

The next time that the Bhoys played a match under floodlit conditions was against Michigan All Stars, during a tour of the USA, on 25 June 1931. However, Celtic would have to wait until October 1959 to switch on their own floodlighting system again. The system was installed at a cost of £40,000 by Edinburgh firm Miller and Stables Ltd. Despite many UK grounds already having floodlighting in place, the Celtic board boasted that the Parkhead lights were the best in football and that the four pylons, towering at 208 feet high, were the tallest such structures in the world.

To mark the timely upgrade, the Hoops organised a glamour friendly with Wolverhampton Wanderers on 12 October 1959. The club had preferred to bring Real Madrid to Celtic Park for the game, but the Spaniards wanted double the £5000 guarantee, which Celtic had offered them. Wolverhampton Wanderers were a welcome replacement, considering that the black country outfit were champions of England. 45,000 Celtic fans braved the rain to enjoy the new facilities, but witnessed their team receive a footballing lesson. The Englishmen triumphed 2-0, which subdued the Celtic support, who were already feeling frustrated by the rumour that Bobby Collins and Willie Fernie were only sold to Everton and Middlesbrough in order to pay for the new lights, during the previous season. 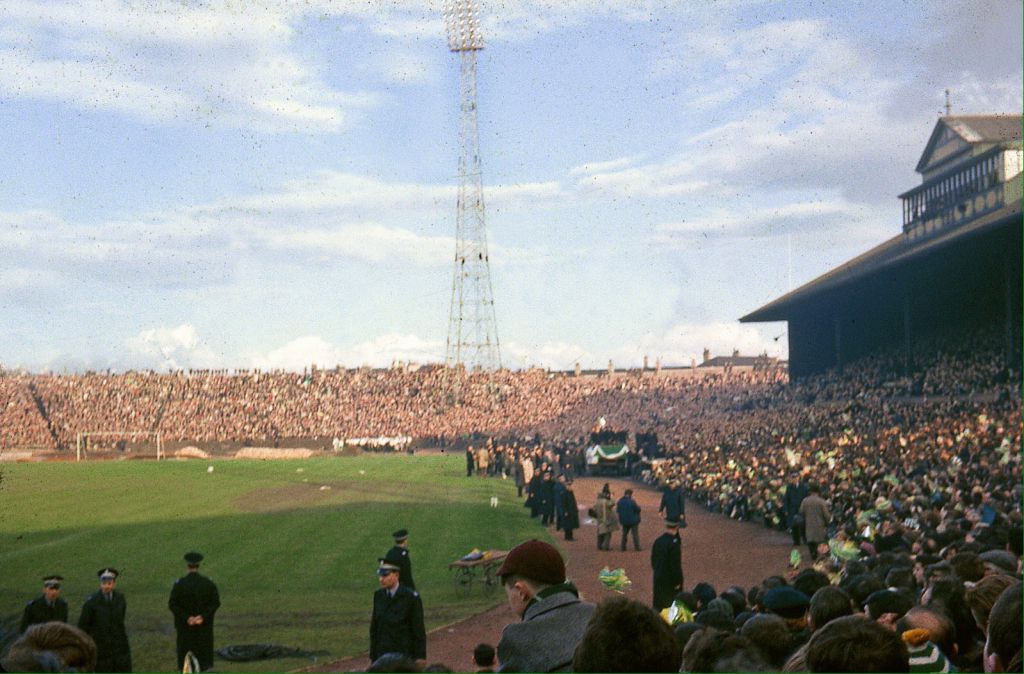