You are at:Home»Latest»Game management – how Celtic must improve

GAME MANAGEMENT is what you employ when things have been tough but you have the desired result where you want it. When you think of game management, you probably think of a tactical substitution or a change of shape. E.g. replacing an attacking minded player with a defender to tighten things up or another defensive midfielder to form a block against a team chasing a point.

Yesterday, Celtic’s game management was poor. Very poor. After a spirited comeback thanks to Callum McGregor, Leigh Griffiths and Christie’s penalty, Celtic had ten minutes to see out in the Granite City.

Lewis Ferguson’s late penalty will have pleased Derek McInnes but it would have put a lot of smiles on the faces of those watching at Ibrox, as Celtic faltered again. The gap stands at six points (albeit Celtic have a game in hand) so presuming we win that and have a full squad to choose from, things are all to play for.

Yesterday, I said that a new coach was needed in order to help ease the burden on Neil Lennon.

However, whether or not that happens, Celtic need to be more savvy with their game management and play ugly.

After Scott Brown steps out of his defensive midfield role, there is a huge gap for the five Aberdeen attackers to gravitate towards. Shane Duffy’s positioning doesn’t help matters as he leaves a huge gap behind him where Hedges identifies as a likely area to exploit. Ajer can’t cover him or else Cosgrove is through on goal.

He continues his run and then manages to fire a cutback across the face of goal, where McGregor then turns and brings Connor McLennan down. Celtic made a substitution shortly before the goal, taking Tom Rogic (who was excellent) off for David Turnbull. A like for like replacement almost with an attacking midfielder replacing an attacking midfielder. What the manager should’ve done is brought Soro on or if injuries had permitted, another central defender.

Parallels between the third Aberdeen attack and February’s defeat to Copenhagen popped up for me. Instead of showing a bit of composure or ‘Game Management’ to take the game to extra-time, Celtic decided to flood the box and hump the ball in, hoping to feed off the scraps. What happened as a result was the Danes pressed the midfield after one of these loose passes from Jullien and transitioned into a counter-attack.

The goal was unmerited from a Copenhagen point of view on the showing across the match but Celtic snatched defeat from the jaws of victory. Had the game gone to extra time, I have no doubt Celtic would have found the net.

This season our game management has not been good enough. Ferencvaros proved that we have declined from recent years as, like Copenhagen, we were better than our opponents but still saw them celebrate at full time after a smash and grab.

An example of successful game management by either consolidating your position or improving upon it is seen in the last game at Ibrox in the 2017/18 season.

Celtic went down to ten men with the score at 2-2 but as the Ibrox crowd called for their team to make the man advantage count, Brendan Rodgers opted to change to a 4-3-2, meaning that Rangers could only get one full back forward at a time.

This masterstroke helps result in Celtic’s third and the winner of the day as it is the two strikers – Edouard and Dembele that combine. The play is from Luiz Felipe Scolari, which he did with Brazil at the 2002 World Cup and Rodgers picked it up from working with the Brazilian at Chelsea. 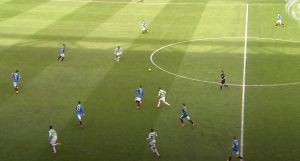 Tavernier is caught forward, leaving Edouard to cut inside and finish brilliantly. Thereafter, Dembele was replaced by Armstrong and Celtic decided to make sure the midfield four was compact.

Another example was at Pittodrie in 2018, Celtic went down to ten men after Lustig was sent for an early bath and again Rodgers decided to defend robustly but bring the extra striker on to nullify Shay Logan advancing too far forward. What happened after Celtic soaked the pressure up was Moussa Dembele broke through and Kieran Tierney scored.

Celtic need to be more professional and more disciplined  when it comes to carrying out a game plan. This was something Rodgers instilled at the club, the need to get yourself to the finish line so you have something to show for your hard work.

Previous ArticleOn this day in 1974 Celtic ended League Cup Final Hoodoo by thrashing Hibs 6-3
Next Article So Careless – Celtic a Whisper away from a Win, Duffy’s Ambrose and Garner Comparisons