You are at:Home»Latest»The game is on! SFA give Celtic v Morton the green light

“As it stands there are no plans to call off any of the William Hill Scottish Cup Sixth Round fixtures,” states Andrew McKinlay, the SFA Interim’s Chief Executive.

“The desire and hope is that they proceed as planned.

“There are no pitch inspections scheduled for these matches at this stage and each host club has worked tirelessly to ensure the pitches and the surrounding areas are safe and in the best possible condition.

“We reiterate that we are in constant close contact with all clubs concerned, police and local authorities. The situation will be reviewed regularly on a case by case basis.

“The safety of supporters, players and staff, as always, remains our top priority. We acknowledge that, either way, some supporters are likely to be left inconvenienced.

“However, we are conscious that a great many have already committed to tickets and travels plans and that – along with improving weather conditions, forecasts from authorities and the views of the majority of the clubs involved – has led to our current stance. Any supporter who does decide to travel is urged to do so with caution and consult all relevant public transport and travel bodies before embarking on any journey.

“Conditions are of course changeable and we remain on standby to react to developments.”

So that’s the SFA position on this weekend’s Scottish Cup ties, including the match at Celtic Park tomorrow when Morton are the visitors.

The Greenock side aren’t happy that the game looks like it is going to be on. Their Chief executive Warren Hawke wants the SFA to make spectator safety of paramount importance as he seeks to have the game called off. The Greenock area has had around 40cm of snow and he is worried about asking fans to travel up the motorway to Glasgow for the game, which has a lunchtime kick-off to suit the broadcasters.

Hawke told the club’s website, gmfc.net: “Firstly, I’d just like to say that Celtic have done a phenomenal job to get the pitch, stadium and surrounding areas ready, and I wouldn’t expect anything less.

“However, it must be much bigger than that, because everybody who’s travelling from Inverclyde – not just our fans – is attempting to get there from an area that has experienced some of the heaviest snowfall in the country. 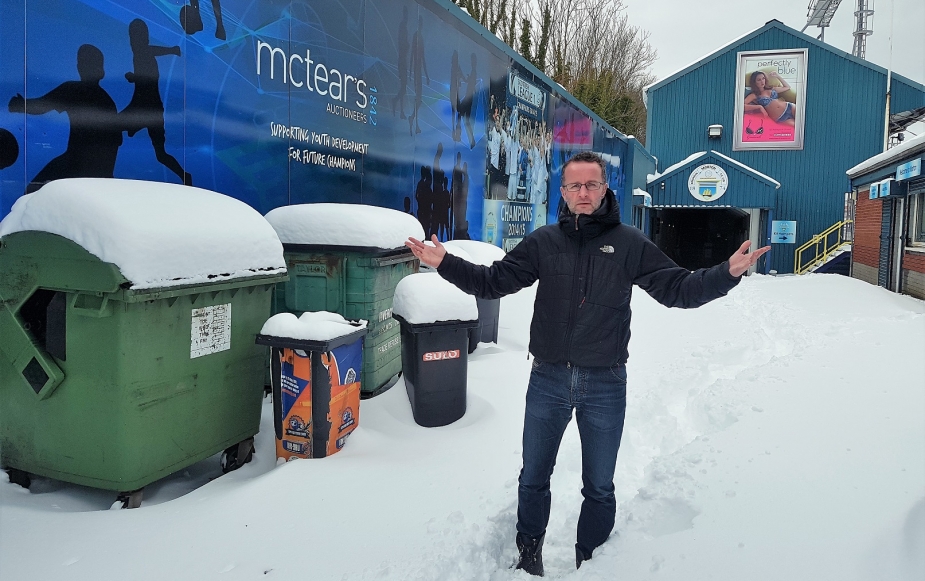 “We will have supporters risking life and limb to travel to a football match while the Met Office is issuing warnings to avoid non-essential travel. Ultimately, it isn’t about the area around Celtic Park.

“It’s about people getting out of their driveways and onto the main roads SAFELY and without accident and harm. Therefore, the decision on the game goes much further than ‘is the pitch playable and the stadium clear?’

“We have to look at every single aspect. Supporter safety has to be key and I don’t think anyone can guarantee that at this moment in time and I fear for a lot of Morton supporters trying to get to this game tomorrow.

“Surely the Scottish Football Association and Police Scotland will come together and make a sensible early decision in the best interests of the safety of everyone.”

Celtic, as the Greenock Morton Director has acknowledged have worked wonders in and around the stadium. Unusually the Celtic squad trained at Celtic Park and there are no problems with the pitch which has been cleared of snow and will be playable. The stadium itself is also ready for the game with the safety of spectators having been fully considered.

The Paradise pitch is looking great as the Bhoys put in their final training session ahead of tomorrow’s @ScottishCup match. pic.twitter.com/CmlsSQtYXv

Previous Article“Paul McStay could have played in any era, any league, a fantastic player,” Andy Payton speaks to The Celtic Star
Next Article GAME ON! “A lot of work has gone on around the stadium to make it safe and secure,” Rodgers