You are at:Home»Latest»Gil Heron’s grandchildren – Tuesday’s Guest of Honour at Celtic Park

WHILE we are all still caught up in the aftermath to that horrible Champions League exit on Tuesday night, it’s worth mentioning that the club had some very special guests at the game who were came onto the park at half-time and were given a very warm welcome indeed by The Celtic support.

The visitors were former Celtic player Gil Heron’s grandchildren and if they didn’t quite understand how highly regarded he remains in Glasgow before their visit to Celtic Park, then they certainly do now.

Gil’s grand-daughter spoke to the Celtic website about what she knows about his time at the club.

“I remember Scotland was the furthest he had ever travelled so he was really excited to be this far away. We remember he would tell you about the cold or that it would rain all the time – and he wasn’t ready for that.

“Then he would just say he was so excited to wake up and be part of a cool club.”

#CelticFC is delighted to welcome the grandchildren of legendary Gil Heron to Celtic Park tonight. The man known as the Black Arrow was the first black player to wear the Hoops back in 1951 ????

We spoke to them as they absorbed Paradise for the first time!#CELCLU #UCL pic.twitter.com/MmFllSelnd

“My Grandfather Gil Heron was the first black footballer to play for Celtic, an amazing man with an amazing legacy, thank you Celtic for inviting me for a tour and a match and being so accommodating!” one of the Heron clan (@HeronChe) wrote on Twitter.

My Grandfather Gil Heron was the first black footballer to play for Celtic, an amazing man with an amazing legacy, thank you @CelticFC for inviting me for a tour and a match and being so accommodating! pic.twitter.com/49hLaPJwaX

“Great to see Celtic welcome Gil Heron’s grandchildren to Glasgow this week. Gil met his future wife Margaret in Scotland while at Celtic and she moved to the States to marry him. Is Margaret in this photo with Gil and his teammates?” The Shamrock Magazine asked.

Gil met his future wife Margaret in Scotland while at Celtic and she moved to the States to marry him. Is Margaret in this photo with Gil and his teammates?@Melissa_Heron, @HeronChe, @MarionC67365685 pic.twitter.com/2LFDHprvIT

Here is a biog page we have dedicated to your father & grandfather. Hope you enjoy it.

If there’s anything you wish to add please contact us anytime.

Extracts from the Gil Heron Biog on The Celtic Wiki

One of the first black players to play in Britain, Gil Heron became the first Afro-Caribbean player to play first team football for Celtic. Heron scored on his début, a 2-1 win against Morton during the 1951-52 season and was quickly bestowed the nicknames of “Black Flash” and “Black Arrow”.

Born in Kingston, Jamaica in 1922, Heron played as centre forward for the Jamaican national team as well as playing for the American club side Detroit Corinthians. On a North American tour he was spotted by a Celtic scout and later signed for the Glasgow club in 1951.

His debut was in a 2-0 win over Morton in the league cup, in which he scored the second goal and was said to be a ‘box-office’ hit in a promising debut: “He has ball control., magnificent headwork and can trap like a veteran… took his goal with camera-shutter speed”. 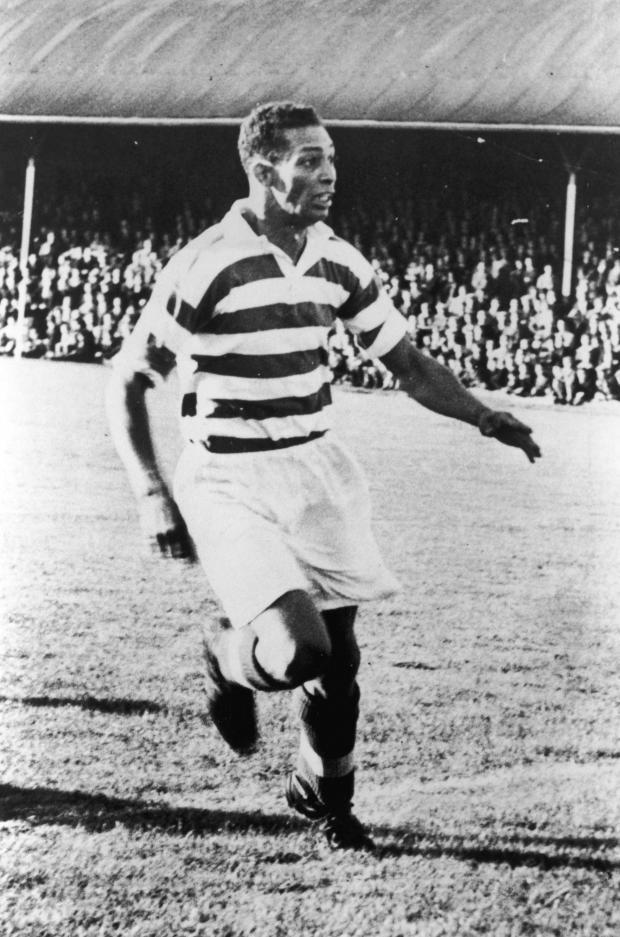 He was so quick off the mark, that he was said to be repeatedly given as offside as linesman couldn’t credit anyone being so fast.

He was given a short run in the League Cup, which in those days was played early on in the season, and scored one further goal, the winner v Airdrie in a 1-0 victory.

At a time when Scottish football was notable for its physical nature, Heron soon struggled – as one local newspaper put it: “lacking resource when challenged”.

The other problem was cliques at the club. Celtic were generally poor in this era, and it was remarked that John McPhail did not like challengers, and both Gil Heron and Leslie Johnstone were undeminded. It didn’t help matters and marked various people at the club down, including the poor team management.

The writer Phil Vasili noted that Heron was criticised in Glasgow for “being unable to transfer his pugilistic tenacity” (Heron had previously been both an athlete and a boxer). He was released barely a year later and signed for Third Lanark in May 1952. He reportedly said on his departure:

“I may go home. I wouldn’t get the same thrill from another club”.

Heron also played for Kidderminster Harriers before returning to play for his original club, the Detroit Corinthians, where his son, the acclaimed jazz musician and poet Gil Scott Heron, was born in 1949, although sadly Heron and his wife had split on his departure to Scotland and he did not see his lauded son until he was 26. 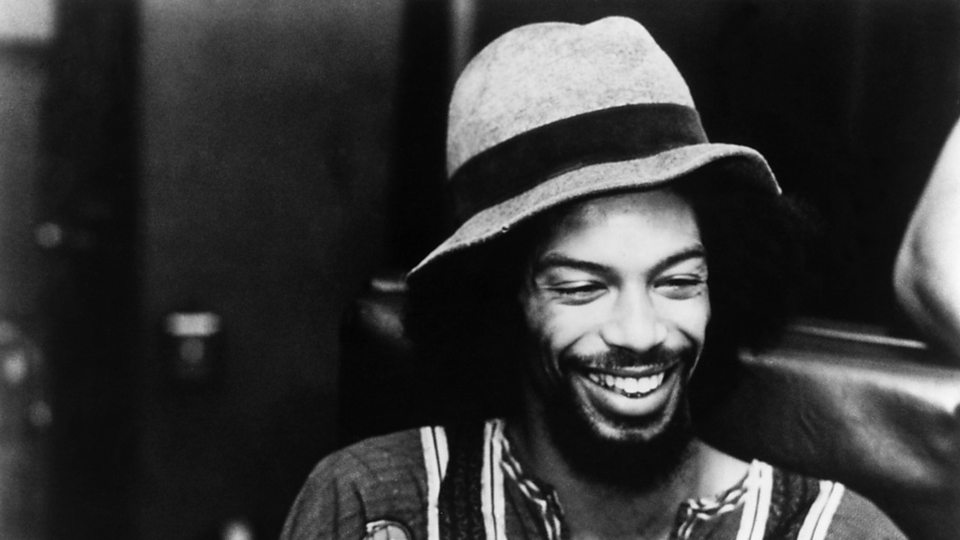 Shortly before Gil Heron’s son (Gil Scott-Heron) once visited Scotland to promote his new book “The Last Holiday,” a local journalist asked about his father’s experiences of playing football in Glasgow:

“My father still keeps up with what Celtic are doing. You Scottish folk always mention that my Dad played for Celtic, it’s a blessing from the spirits! Like that’s two things that Scottish folks love the most; music and football and they got one representative from each of those from my family!”

Despite Heron’s relatively brief spell at Celtic, it is apparent that Gil Heron Sr still retained fond memories of his time in Scotland.

It became a tradition of studious Gil Scott-Heron fans to show up at his Glasgow shows in the green and white hooped shirt of Celtic. Gil Scott-Heron joked at one concert:
“There you go again – once again overshadowed by a parent. I’m going to wear my Celtic scarf and Rangers hat when I come over!”

A good sense of humour and a firm favourite of the Celtic diaspora, sadly he has now also passed away but along with his father is much fondly remembered.

From The Celtic Wiki, where you can read more about Gil Heron HERE.

He was and is still highly thought off pic.twitter.com/5JptOctIei

Previous ArticleThe First of Seven Trophies for Rodgers as Celtic Manager
Next Article ‘Tuesday night turned into a shambles,’ says Niall J, ‘Lennon will have to learn from this’