Today saw Glasgow’s first An Gorta Mór memorial being unveiled almost two centuries after the first wave of Irish refugees landed in the city. The Great Hunger, sometimes referred to as “the famine”, caused the deaths of over 1 million people and caused a further million Irish men and women to flee the country. Thereafter, even greater numbers emigrated to the four corners of the globe and the population of Ireland was decimated by some 20-25%.

In Glasgow, the immigrant Irish were not given a hospitable welcome by the indigenous population. Their religion was different, they wanted Home Rule for their country and they were seen as an inferior race of strike breakers. Suddenly, the horrors witnessed at home – the failure of the potato crop and the shipping of alternative food sources to other parts of the British Empire – were being replicated on a smaller scale. Indeed, this alien and unwanted population were forced into poverty and destitution. They found decent employment hard to come by and had to internalise any expression of their religious or cultural identity.

It took the descendants of Irish immigrants until 1991 to reach occupational parity in Scotland, as compared to their American based counterparts who achieved the same status by 1901! However, it wasn’t all doom and gloom for the Glasgow Irish as Brother Walfrid and an ingenious band of his compatriots came together to establish a football club in late 1887. Celtic was the club’s name and it was formally founded after a meeting held at St. Mary’s Church Hall in the Calton district of the city. From that day onwards, Celtic has given the Irish and their offspring a sense of identity, a source of joy, a place to express themselves and much needed charitable assistance:

“The main objective of the club is to supply the East End conferences of the St. Vincent De Paul Society with funds for the maintenence of the “Dinner Tables” of our needy children in the Missions of St Mary’s, Sacred Heart, and St. Michael’s. Many cases of sheer poverty are left unaided through lack of means. It is therefore with this principle object that we have set afloat the ‘Celtic’, and we invite you as one of our ever-ready friends to assist in putting our new Park in proper working order for the coming football season.”

Fittingly, Glasgow’s An Gorta Mór memorial was erected and unveiled outside St Mary’s Church this morning; a lasting tribute to our forefathers and a celebration of who we are and what we have achieved.

In a small ticketed ceremony, Canon Tom White began proceedings by sharing the story of finding the appropriate site for the memorial. Sculptor John McCarron then said that the generation who raised this monument will be remembered forever, before Jane McCulloch, Consul General of Ireland, paid tribute to the generosity of the Irish community and the suffering of those who died, those who left, and those they left behind. 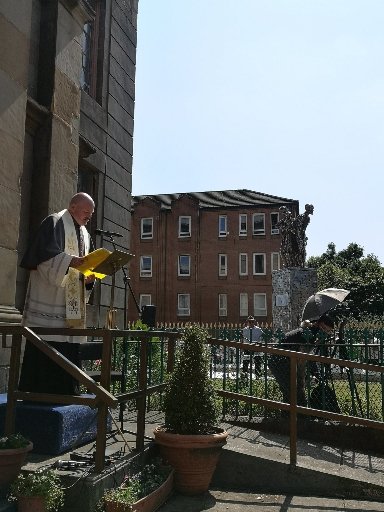 Much has changed in the last 134 years and many things have got better. Those with Irish ancestry are now increasingly climbing the social ladder in Scotland, though the medieval issues of sectarianism and anti-Irish racism are still too often bubbling under the surface. 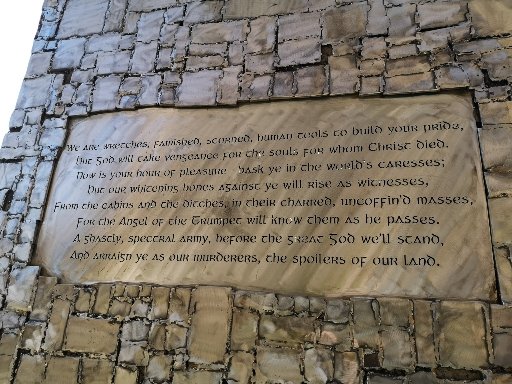 Jeanette Findlay, a Celtic Trust Trustee who has been pivotal to the monument being erected, gave a fantastic speech on that subject. She celebrated Glasgow joining the diaspora cities with dedicated memorials to An Gorta Mór and noted that we owe it to our ancestors to offer modern day refugees the welcome that the famine Irish rarely received.

The fantastic event then concluded with Canon Tom White blessing the memorial. 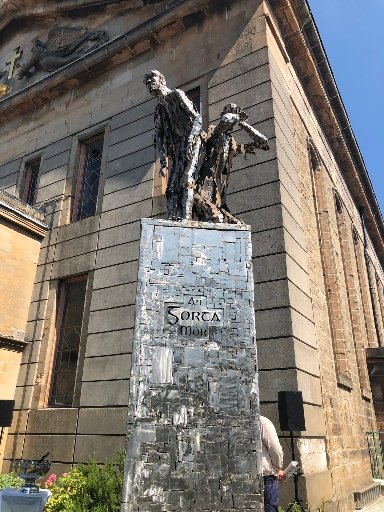 We have built it!

You have built it pic.twitter.com/S1Ptv2cdbj