You are at:Home»Latest»‘Good to hit landmarks,’ Celtic’s ‘Starman’ Forrest’s 34 goals and 30 assists Haul

JAMES FORREST is currently in the lead in voting for The Celtic Star’s Player of the Year – you can add your vote now if you haven’t already done so or if you have, check how the voting is going…remarkably since the start of the last season he has scored 34 goals and had 30 assists and there are still six games for him to go to add to that tally!

Jamesy opened the scoring at Hampden on Sunday against Aberdeen, he scored the opening goal at Easter Road in the semi-final and also grabbed the winner against the Rangers in the recent league win to well and truly put them back in their box, ensuring that the club Charles Green founded in 2012 remains barren of major honours in its entire existence.

Speaking to the official Celtic website Jamesy recalled a conversation he had with the Celtic manager Neil Lennon before the semi-final about another left-footed goal he scored earlier in his Celtic career.

“The first touch was good and the second touch got it out from my feet so I tried to hit it cleanly. I was buzzing when it hit the back of the net and I felt we really kicked on from there after that goal.

“The manager said before the game that he could remember a game at home against Hearts where I got the ball and scored with my left foot. He reminded me of that conversation after the game. 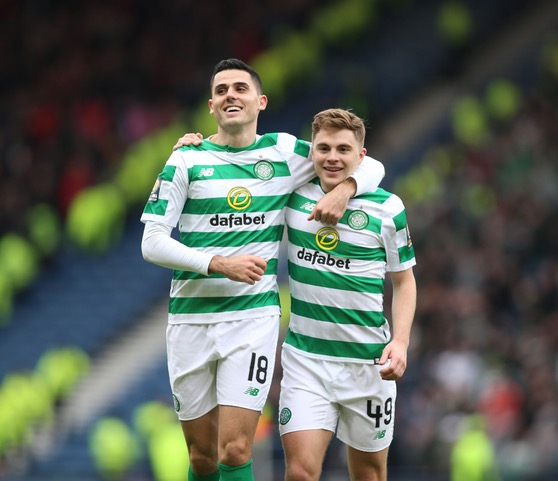 “I don’t normally shoot from outside the box but sometimes if it’s sitting well, then the manager will encourage you to shoot because you never know what can happen,” Jamesy said.

He admitted that he doesn’t mind swapping wings and has also been used in the number 10 role occasionally since Neil Lennon took over after the hasty departure of What’s His Name.

“I don’t mind playing on the left or on the right, as long as I can help the team,” he said.

That goal at Hampden was Forrest’s 17th of the season, which equals his previous best so he has plenty of incentive to grab another goal this weekend again against Hibs at Easter Road to make this his best ever goalscoring season. His previous 17 goal haul came last term in the Double Treble season so his recent good form – the best of his career is not just a purple patch but shows a sustained level of consistency from a top, top Celtic Star.

And last term Jamesy had ten assists to his name for the season, this time around he’s doubled that with twenty assists with six games to go!

“Last year was my best season ever and I feel I’ve kicked on again. That’s what I always want to be doing. There are six games left in the season now and I’m just going to take it a game at a time and hopefully keep contributing to getting more.

“It’s always good to hit landmarks like that. There are five more league games so I’m going to keep working hard and hopefully try and add to what I have just now.

“The last couple of seasons I’ve tried to help out with assists and I’m happy to build on that.

“As an attacker for Celtic, you’re always looking to create and score goals. The stats this season are good and I want to keep working on them,” Jamesy said.

So does he get your vote?

Previous ArticleCeltic’s ‘Unbelievable Flop’ at Dens Park throws away the 1980 Title
Next Article ‘8 in a row for Celtic – and this is how it feels,’ Boxer Bain’s up for the Battle