You are at:Home»Latest»Greatest Comebacks: Having Trailed Three Times, Celtic Leave It Late To Beat Falkirk 4-3

Our recent series on great Celtic comebacks from the 1960s, have brought a lot of memories to the forefront of a generation of Celtic supporters. Many of you have shared those memories with us and it has made for fantastic reading.

Next up in our series is another phenomenal game of football, when Celtic beat Falkirk 4-3 at Brockville in October 1965. Peter Marshall suggested that I relive this game as he recalled attending and the joy that he felt when Celtic triumphed having trailed on three occasions!

Going by the match pictures, Brockville was a small compact ground at the time, or “A good wee ground” as Peter described it. 16,000 were tightly packed into it, to witness a stunning game of football on 16 October 1965.

The dynamics of the game in Scotland were very different compared to the modern era. To give you an idea of this, the draw for the next round of the European Cup was made that day. Kilmarnock were Scotland’s representatives in the competition and they were paired with Real Madrid. The Ayrshire club may have exited the competition against the Spanish giants, but they held Madrid to a 2-2 draw in the first leg at Rugby Park!

It was a line up not too dissimilar to that in Lisbon, the differences being Fallon taking Simpson’s place in goal after the first choice keeper failed a late fitness test; meanwhile Auld, Craig and Chalmers featured for the reserves in a 4-2 victory over Falkirk’s second string at Celtic Park that day. It should be noted that Chalmers bagged a hat-trick in that reserve league match.

The game started with Falkirk on the front foot, something that went against the script as Celtic had built on their Scottish Cup triumph that May by winning four from their first five matches in the league. Nevertheless, the Hoops soon pulled themselves together and were unlucky not to go ahead when Joe McBride forced the keeper into a superb double save.

It was the hosts who took the lead though, as a short corner was thundered into the net by the home side’s full back – Lambie – in the tenth minute. It didn’t take long for Celtic to respond, as McBride set up Lennox four minutes later, and the Saltcoats man belted his shot past the goalkeeper to level proceedings. 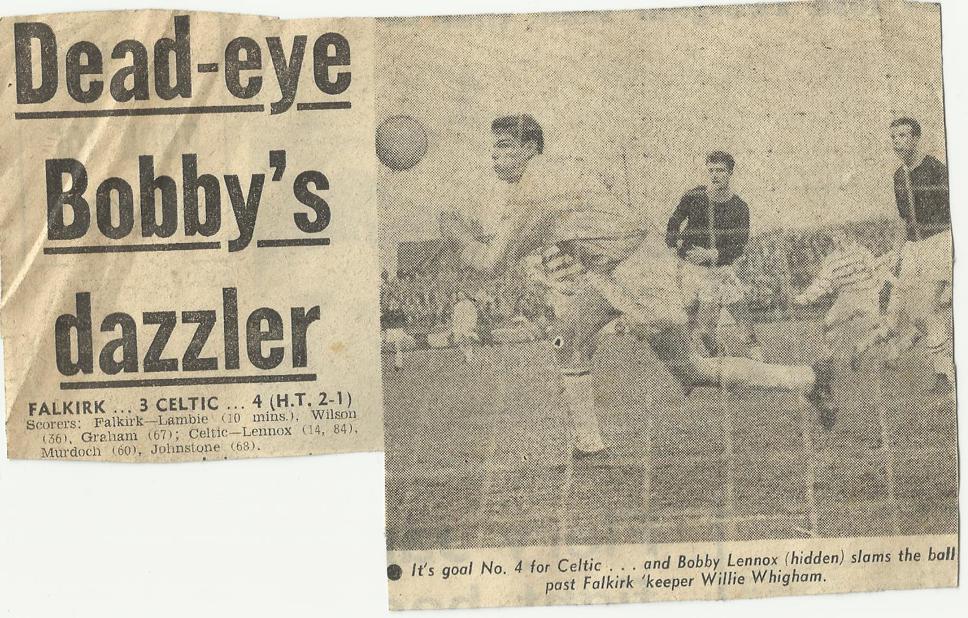 Match reports of the time suggest that Celtic took control of the match thereafter, dominating the play and producing wave after wave of attack. However, it was Falkirk to took the lead again, when Wilson scored completely against the run of play. The scoreline remained 2-1 as the teams went into the break.

An hour into play, Murdoch volleyed Celtic level for a second time. The equaliser kept Celtic level for less than ten minutes though as Graham put Falkirk in front for a third time after hitting Celtic on the counter. That goal came on 67 minutes and by the 68th, the scoreboard read 3-3 as Jimmy Johnstone weaved around the defence before tucking the ball into the corner.

Six minutes from time Lennox put Celtic in front for the first occasion in the match. The Hoops held out until the end of the game for a phenomenal 4-3 victory.

Peter Marshall explains that such a scoreline was typical of that era: “I just remember that time, September/October, we were scoring goals for fun – 4,5,6,7 quite regularly. We were spoiled, it was Joe McBride’s first season.”

Peter’s comments certainly stack up as a delve into the archives reveals the following results:

That Hibs 3 Celtic 5 Game – Ladies and ‘the gents’ at Easter Road | The Celtic Star https://t.co/j2gZhLKi0r

Celtic Open the Floodgates with a Devastating Spell of 4 Goals in 5 minutes | The Celtic Star https://t.co/MZNmgHz55V

If you have any particularly special Celtic game that you attended and you’d like to write about, we’d love to hear from you. Just send over your memories and stories of the game to editor@thecelticstar.co.uk

Previous ArticleVideo: A Fan’s Song For Neil Lennon
Next Article Good things come in threes – Deal in Forster, Edouard and Ajer for 10-in-a-row