There was quite a reaction to our recent articles about Celtic’s greatest comeback and John Woods’ experience of attending that match, when Celtic defeated Dunfermline 5-4 in November 1966. You can read the match summary here and John’s story of watching the game from the terraces here.

Having witnessed so many memories flood back to those alive at the time, I decided to post the article up on to a few Celtic forums. This led to a whole discussion of forgotten matches and incredible comebacks. One that John Woods mentioned to me, in our discussion about the aforementioned 5-4 victory, was a game that took place a month earlier at Easter Road.

It’s back to 8 October 1966 as Celtic travelled to Easter Road. The Hoops had started the season with 16 consecutive wins from the 4-1 demolition of Manchester United in August to the 3-0 drubbing of Zurich in Switzerland that midweek. Of those 16 victories, four had come in the league as the League Cup and Glasgow Cup preceded league fixtures in this era. Hibernian had enjoyed a superb start to the season too, with four wins from four themselves. This was a tremendous Hibs side.

John told me how he took his friend to the game that day, the first time his pal had ever gone to a football match. His friend turned to him at half time and said with a big smile: “Will they ever stop scoring?” Having studied the match report, it’s not hard to see why.

Another Celtic fan (P.Marsh) present at the game tells me that it was a hot sunny Saturday and that it was a huge game because of how good Hibs were at the time. He had got the train to Edinburgh for free, using his father’s pass as his father worked on the railways and got travel at no cost. He recalls being stood behind the goal at the away end, and that the stadium was absolutely packed with a near 50/50 split of supporters.

The teams lined up as follows:

Auld and Murdoch played through the pain barrier as the pair had knocks from the midweek European Cup win over Zurich. Meanwhile, Lennox dropped to the bench after the victory in Switzerland, being replaced by Joe McBride.

The sound of the referee’s whistle was met with a huge roar from the 43,256 people in the ground. It wasn’t long before one half of Easter Road gave a similar cheer as Peter Cormack put the hosts 1-0 ahead in the 10th minute. However, that early scare was responded to within five minutes as Joe McBride equalised with a tidy finish having been set up by Jimmy Johnstone.

Jinky was immense that afternoon, having a hand in three goals, but not before Steve Chalmers found the net to put Celtic in front on 30 minutes. A Davies penalty put Hibs level 7 minutes later, but it was then that Johnstone on the wing combined with the inside right, Joe McBride, in the 42nd and 43rd minute to hand McBride a first half hat-trick and take Celtic into the break with a 4-2 lead! 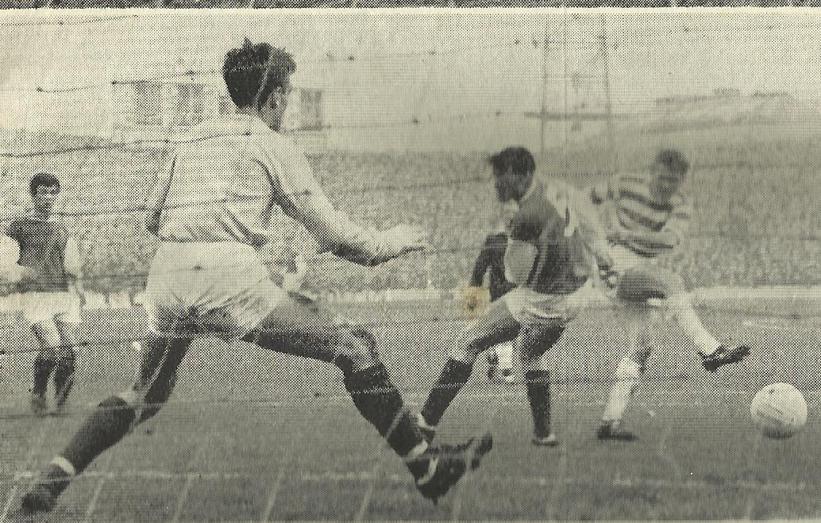 The second half was slightly less frenetic, with McBride bagging his fourth of the afternoon on 74 minutes, whilst McGraw grabbed a late consolation for Hibs in the last minute.

Speaking of the match on the world of Celtic forums, a Huddleboard member with the username ‘Texas’ said the following: “I was at that game. Joe McBride was out of this world. He had 5 shots at goal. Scored with 4 of them and hit the post with the other. I had the honour of meeting him many years later and we talked about that game and he spoke about how he would have joined the exclusive “5 in a game club” but Stevie Chalmers didn’t give him the ball for a tap in. One of the best natural goalscorers I’ve ever seen and an absolute gentleman.”

Another member of the Huddleboard, with the username ‘saeta rubia’, gave this recollection: “I was at the game with dad somewhere left of centre in the huge terracing opposite main stand. Think it was a lovely day. I do not remember any of the Celtic goals, only the second for Hibs. My only real recollection of the day was walking up to the top of the terracing to get out. I was wearing a green white and gold tammie and a man, Hibs fan, spotting the tammie, patted me on the head and said “Son what a team you have there.” Think he was right. Talking about Hibs at Easter Road, Sportscene opened their programme with a spectacular McBride goal at the covered end. What game was that? The same game?”

The £90,000 a week Forster problem and the emerging £5k Vasilios Barkas solution | The Celtic Star https://t.co/pjwUciWroH