You are at:Home»Latest»Greg Taylor ready to step in for Liverpool’s Andy Robertson in Scotland slot

Celtic full-back Greg Taylor has said that he can replace Andy Robertson for Scotland as the Liverpool full-back misses the International triple-header through injury. Robbo, the Scotland captain, is a big miss and Steve Clarke will be hoping that whoever steps in can perform well as the Scots chase victories over Ukraine and Ireland.

As reported by The Sun, Taylor says that he is ready to step into Robertson’s shoes and perform for the National team.

“It is another system to the one that I am used to playing for my club.

“It is quite different to how I play for Celtic and it is another position for me to learn.

“But that certainly doesn’t mean it is something I would be averse to playing.

“Any opportunity that you get to play for your country is a massive honour no matter what position it is.

“If the chance arises for me to feature there in any of these games then I will be privileged to do so. I always am when I am asked to play for Scotland.” 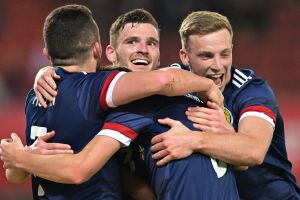 Taylor should be afforded the opportunity to stake a claim for his place in the side as a reward for the fine form he has shown so far this season. The full-back has been one of Ange’s finest achievements since becoming boss in the summer of 2021, taking Taylor into a squad player and establishing him as an excellent, integral part of how the manager wants us to play.

Taylor, 24, joined in 2019 from Kilmarnock and took his time to settle but since Ange arrived, he has developed and progressed into a fine member of the first team. The arrival of Alexandro Bernabei has propelled GT3 to new levels at the back and this form will surely have been noted by Clarke. Whilst he is often involved in International Camps, he is down the pecking order somewhat as the captain of the team is ahead of him.