You are at:Home»Latest»Greg Taylor will need to raise his game after new signing, says Charlie Nicholas

Charlie Nicholas has told Greg Taylor that he will need to up his game after the club signed highly-rated full-back Alexander Bernabei from Lanus. Taylor was Ange Postecoglou’s preferred option at left-back but he moved quickly to strengthen in the position this summer.

Speaking to The Sunday Post, Champagne Charlie believes that the Scotland Internationalist will need to be at his best in order to keep his place in the team.

“He has been on Celtic’s radar for several months, and there is a feeling that he is going to be an excellent addition to the squad.

“Ange had wanted to strengthen that area of the team, and it’s now between Alexandro and Greg Taylor to battle it out.

“All managers want competition for places, and the Celtic boss is no different.

“Greg was excellent for the Parkhead club last season, and more than played his part as they won the title and the League Cup.

“But he is now going to have to step it up to another level, and Ange will be hoping that the two of them going for it will improve them both.

“Successful teams need to have two players fighting for every position.” 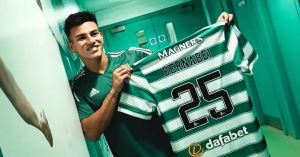 Bernabei was signed in a deal worth £3.75m last week and the Argentina U23 Internationalist will be looking to make the slot at the left side of Ange’s defence his own. The 21-year-old arrives as Celtic’s first ever Argentinian player.

Taylor has been on the end of some stick from pundits and supporters in the past; however, he adapted very well last year becoming an excellent player for the team as they secured the League Cup and Premiership title. The player has assumed the role of a senior player under Postecoglou and he will certainly be the man to be replaced in the starting XI.

The Celtic Graves Society to Commemorate former Celtic player and director Mick Dunbar
So just who were the Class of ‘55? Matt McVittie’s Celtic Story
John Hughes Tribute – Celtic did what Muhammad Ali had done and “shook up the world”
Previous Article“We know exactly where we stand, he knows us and we know him,” Joe Hart
Next Article Legia’s commemorative merchandise for Artur Boruc testimonial