You are at:Home»Latest»Griffiths advices youngster to make Celtic exit

LEIGH GRIFFITHS is known predominantly for his scoring at Celtic but the striker has taken on an advisory role to youngster Jonathan Afolabi with the pair striking up a friendship. With the news that Afolabi would be joining Championship side Dundee, the Irish U21 striker thanked Griffiths for advising him to join James McPake’s side.

Speaking to The Courier, Afolabi said that Griffiths sold him on a move to Dens Park, where the 30-year-old spent two seasons as a youngster.

“I got a chance to talk with Leigh Griffiths as we ended up training together and he said Dundee was a brilliant club to go to, to really kick on with my career.

“I hope to get as many goals as possible to help the team and myself. Hopefully I can reap the rewards when I go back to Celtic next season.

“Being able to watch them train is great. Edouard is only a couple of years older than me so it is good to see the quality he has along with the other strikers.

“It is always something to be able to work towards for the long term – it is good for my aspirations.” 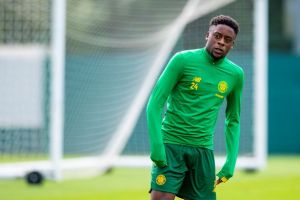 Afolabi joined Celtic from Southampton in the summer but failed to make an impression with the first team meaning he is yet to make his debut so made the switch to Fife in an attempt to get some first team experience.

Afolabi has made two appearances for Ireland’s U21s but is yet to make his debut for Celtic. Hopefully the experience on loan at Celtic will ready him to breakthrough at Celtic next year.

With Odsonne Edouard, Albian Ajeti, Leigh Griffiths and Patryk Klimala ahead of him in the club’s striking hierarchy, Afolabi will look to get some first team exposure with the Championship side as they hope to gain promotion. Their first game of the season will be against promotion rivals Hearts.

Afolabi was booked for ‘excessive celebrating’ when he scored a goal versus Dundee United and will be hoping to build upon a positive impression with the Championship side – something that the Dee supporters will be happy with in their new signing.

Previous ArticleFK Sarajevo v Celtic: ‘Something inside, so strong’ – The spirit of Miss Sarajevo,’ Matt Corr’s Diary, Dedicated to the victims of the Siege of Sarajevo and the massacre at Srebrenica
Next Article Injury news, kick-off time and where to watch Sarajevo vs Celtic