You are at:Home»Latest»Griffiths is fighting for Celtic future as brother suggests he’s been released

Leigh Griffiths was training yesterday ahead of a return to pre-season with Celtic. The 30-year-old is awaiting the club’s decision as to whether the striker will be offered another season or whether he will be forced to find a new club. However, his brother tweeted earlier today suggesting that there had been no offer from the club and that Celtic’s No.9 would become a free agent.

Griffiths was back on the grass as he looks to get himself into shape for pre-season and banish the memories of last season’s preparation which involved takeaways and Tik-Toks.

Just a top striker and his brother having a bit of fun. Decent save tho 👀👀 @Leighgriff09 #LG9 #AG1 #BROTHERSHAVINGFUN pic.twitter.com/J7Dz1ODM7A

Griffiths’ brother, Aaron, posted a clip of the pair training but followed it up suggesting that Griffiths had been released.

The tweet, as seen below, was quickly deleted as Leigh likely got involved. However, it remains unlikely that  the club will have released the player without at least giving the new manager a chance to assess his options. 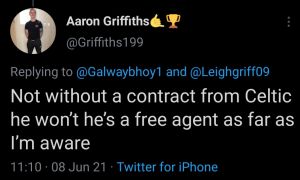 The ex-Hibs striker has endured a poor season after a very public issue with his fitness at the beginning of the campaign. The player has undoubted quality but fitness concerns have been highly disruptive for the club not being able to call upon a player that can, on his day, turn a game on its head. It was this inconsistency that likely cost him a place in Steve Clarke’s 26-man team for the Euros.

Griffiths scored just five goals last season as Celtic struggled. The striker’s scoring record of 123 goals in 258 appearances represents an incredible return for the £800k paid to Wolves in 2014. However, no one should be beyond scrutiny and if Postecoglou decides that he is not the man to help regain the league, he should be let go. There was talk of Kevin Nisbet coming to Celtic with Griffiths being used as a makeweight for the deal. This story will likely develop as Scotland’s Euros campaign kicks off on Monday; however, as it stands he is a Hibs player and Griffiths is still a Celtic player.

With that said, Odsonne Edouard is set to depart for Leicester City whilst Patryk Klimala has already left for New York Red Bulls. Moi Elyounoussi, who occasionally was played up front, has returned to Southampton leaving just Albian Ajeti as the club’s only contracted option. Griffiths should be kept to offer competition and depth ahead of a colossal rebuilding job this summer. It is one position that requires immediate attention but if Griffiths can prove that he can get himself in shape and he can offer something as a second striker then he needs to do it immediately or find himself back at Easter Road.