There may not have been much riding on this one for Celtic FC Women today, but when there are goals to be had you can be certain, dead rubber or not, that Charlie Wellings will be on the prowl.

And so it proved, as Celtic headed to face Hamilton Accies today in the SWPL1 and had a game of little consequence, when it comes to league standings, over and done with as a contest by half time, with the Hoops scoring three before the interval, and top scorer – and surely player of the year – Wellings breaking through the 30 goal barrier for the season, as Celtic eventually stopped their goalscoring barrage at six against their rocked South Lanarkshire opponent this afternoon. 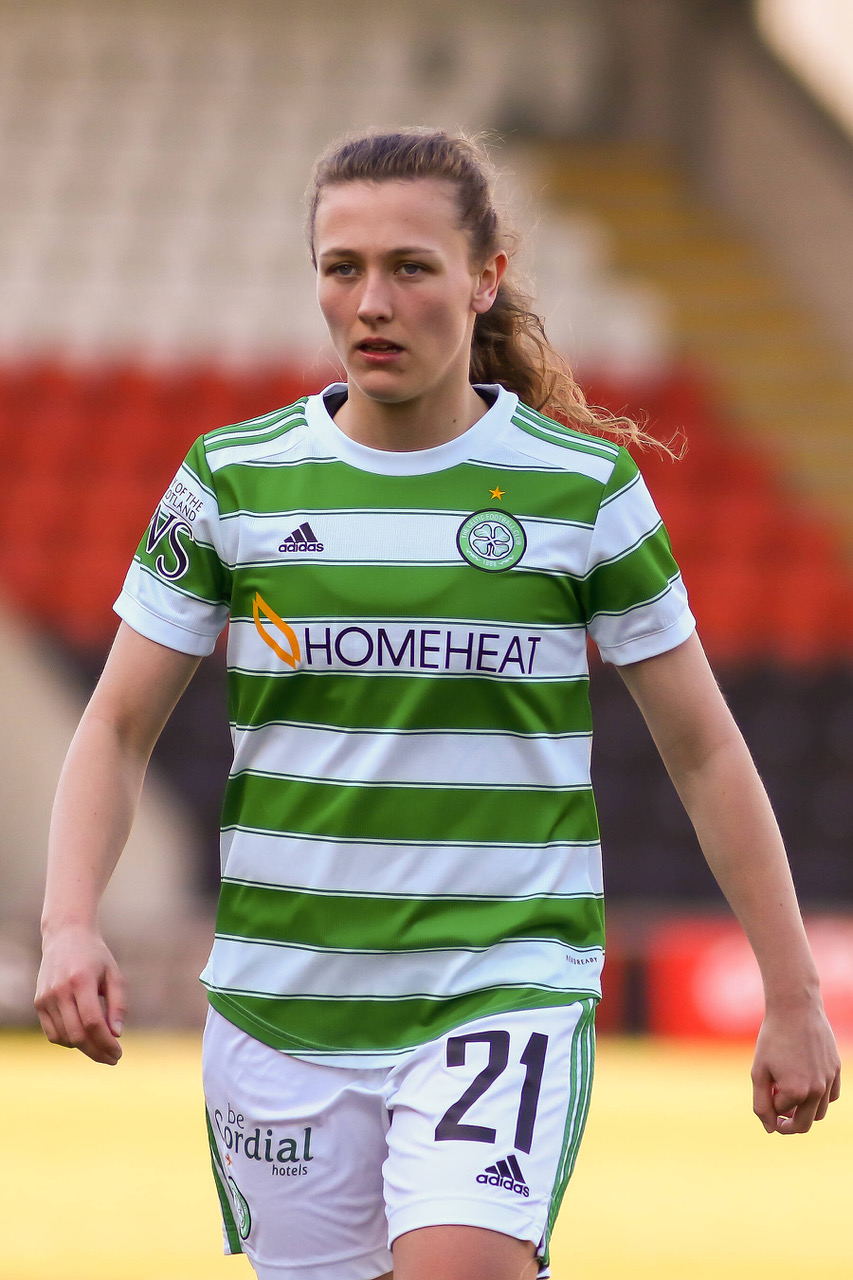 Gets the ball scores a goal, Charlie Wellings – over 30 goals this season so far…

For the Celtic players there was of course the carrot of catching Fran Alonso’s eye ahead of next week’s Scottish Cup Semi Final with Hearts, and that may explain the impressive first half performance. However, in truth this Celtic side has been in ruthless form for some weeks now, as Hamilton found out to their cost when the Hoops opened the scoring after 22 minutes when Liv Chance, returning to the starting line-up this afternoon, grabbed the opening goal, as the New Zealand international converted after the ball had been swept across the face of goal.

And for goalkeeper Sarah Rhind in the Accies goal, picking the ball out the net was to become too regular an occurrence, as just ten minutes later Mengyu Shen played in the perfect through ball for Charlie Wellings to go one on one with Rhind – and there is only ever one winner when that happens as Charlie Wellings netted her first of the afternoon and her 30th of the season as the Celtic striker slotted the ball home, making it look all too easy.

With a minute to the break Celtic were on easy street and once again Charlie Wellings was the scorer and very much on track for yet another another hat-trick in the Hoops.

Within seven minutes of the restart Wellings did just that as Liv Chance turned from goalscorer to chance provider picking out Wellings superbly in a crowded penalty area and it was three and easy for Charlie as the striker nipped the ball past Rhind to complete her hat-trick.

That may have been a sign for some teams to take their foot off the gas but Celtic were far from finished toying with Hamilton this afternoon, and a fifth goal arrived courtesy of Clarissa Larisey, with the clever assist this time coming from Jacynta, as the calm through ball was met by an equally composed finish from the Canadian striker to put Celtic 5-0 ahead. 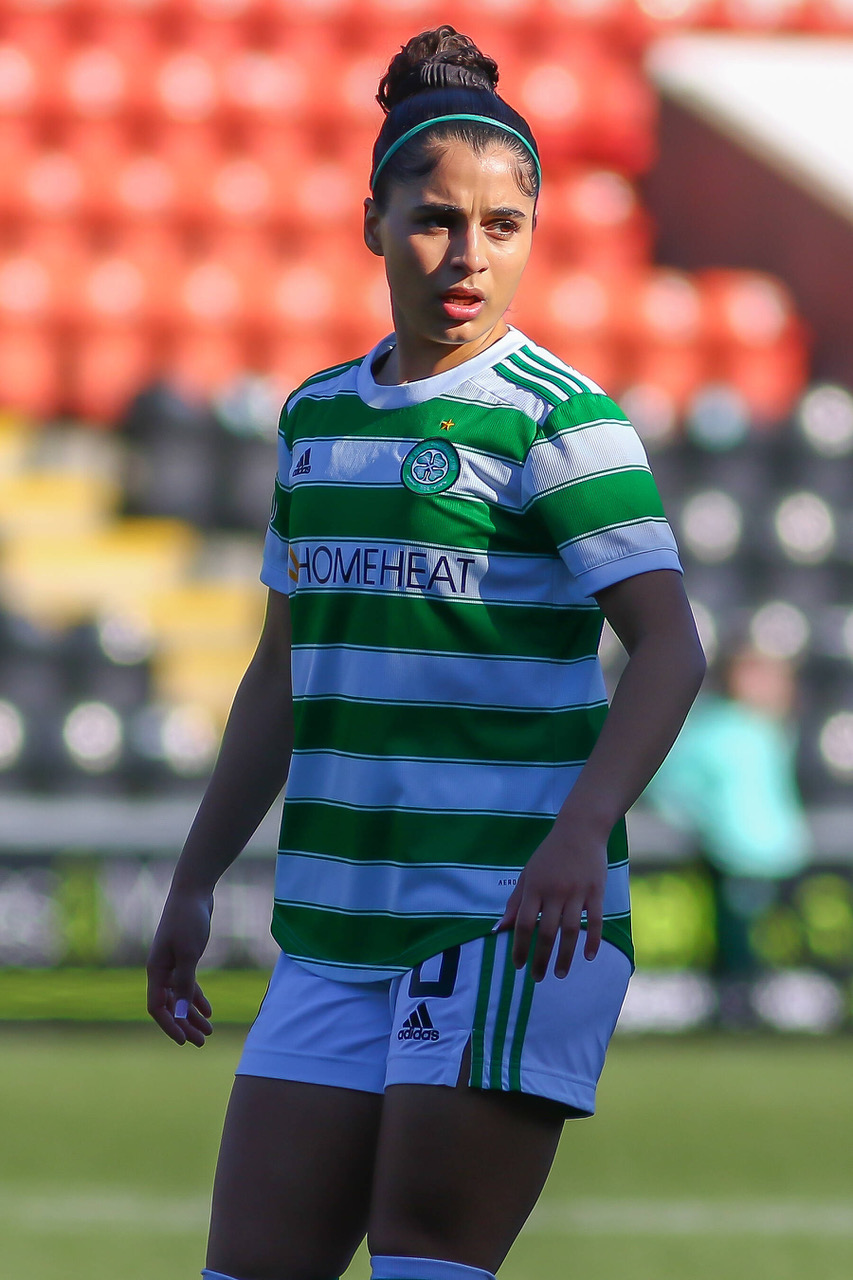 Jacynta was once again the architect

Done now? Not a bit of it. Celtic were in a ruthless mood today and weren’t up for letting up at five, as with ten minutes to go Jacynta was once again the architect as her fast feet proved too much for the Hamilton defence to deal with and the unfortunate Quinn could only deflect into her own net.

Hamilton however could now breathe a sigh of relief as Celtic had stopped with six of the best, a hat-trick for Charlie Wellings and a clean sheet, as Accies were simply swept aside by a Celtic side bursting with confidence, ahead of next weekend’s Scottish Cup semi-final with Hearts.

Celtic may well face a stiffer challenge against their Edinburgh opponents than they did from Accies today, but on this form it won’t matter much who Celtic play, they’ll have to go some to stop a Celtic team peaking at just the right time and a striker bang in goalscoring form, as the Hoops aim in on completing a domestic cup double this season.

It may well then be a week of sleepless nights ahead for the Hearts squad with Celtic in such scintillating form, indeed it may well be worth their coaching team leaving out the video analysis altogether in the week ahead, after all with Charlie Wellings banging in the goals again, any sleep they do get will surely only consist of nightmares.

Fran Alonso was clearly pleased with both the performance and the result today as you can see in his post match interview with Celtic TV,  see below and you can also watch hat-trick hero Charlie Wellings’ interview too.

📹 Manager Fran Alonso’s reaction to a 6⃣-0⃣ win over Hamilton Accies and over 💯 competitive goals scored this season!#COYGIG 🍀 @CelticFC pic.twitter.com/w6I00yO0rG

🟢⚪️ @cwellings18 has now scored over 3⃣0⃣ goals for the Hoops!

📹 The striker spoke to @CelticTV after their 6⃣-0⃣ win over Hamilton Accies. #COYGIG 🍀 @CelticFC pic.twitter.com/EkG6TOOTqQ

Six goals, one hat-trick, a cleansheet and a Scottish Cup semi-final to look forward to now!😍

Previous ArticleRoss County 0 Celtic 2 – Relief at the moment, and not yet triumph, but triumph may be here soon
Next Article Sandman’s Definitive Ratings – Celtic at Brigadoon