JONNY HAYES has targeted more game time at his new club following his Celtic exit. Hayes is one of the players that won’t have their contract renewed by the Scottish Champions as a result of the uncertainty caused by Coronavirus. The versatile veteran will be weighing up where he plays his football next but acknowledges that whilst he was expecting a new deal at Celtic, it may be a blessing in disguise leaving the Scottish Champions.

Speaking to TALKSPORT, the former Aberdeen man says that Celtic boss Neil Lennon and his assistant John Kennedy wanted him to stay prior to the Coronavirus pandemic.

“I’d spoken to Neil Lennon a couple of days before the Rangers game back in December.

“He was aware I was out of contract in six months – and he wanted me to stay.

“As the season we went on we had similar conversations and he was quite keen for me to stay. He saw me as part of his plans.

“I had the same conversation with John Kennedy.

“So, when it comes down to the decision being made this week, I don’t know whether the financial impact the coronavirus has had on Scottish football has contributed to it or not.

“But I know that I wasn’t leaving the club, sort of being phased out, and was still playing regularly from the bench coming on or in the team until this virus struck.” 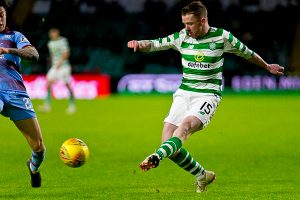 Whilst the financial cost of Coronavirus is unknown, there will be a huge knock-on effect as a result of the pandemic to football and Hayes may be a casualty of this. Celtic have already spoken about recruitment and whilst the season ticket remain on sale, the club will have to budget sensibly and that means making tough decisions. Peter Lawwell will have communicated to Neil Lennon that if he wants to bring players in, he needs to clear out a number of high earners that aren’t first team picks.

The Irishman, who always gave everything to the shirt, has already been linked with an English Championship duo ahead of next season. Hayes, who turns 33 in July, will be hoping that he gets game time wherever he ends up.

“If you’re on the outskirts and not playing each week then it’s an easier decision to be made.

“But when you are involved and playing, it comes down to football. Maybe, for whatever reason, if I’d stayed at Celtic, I might not have got as much game time.

“I’m a little bit older now, it’s probably better for me to go out and play more regularly.

Hayes played 68 times for Celtic and scored twice. His first goal was against Aberdeen in his debut season; however, his second goal was at Ibrox in which the Irishman emptied the ground as his late goal sealed the three points for Neil Lennon.