Celtic entertained a Hearts side at Oriam in Edinburgh this lunchtime looking to extend a highly impressive run of seven games undefeated in the SWPL1 and keep up the pressure on Champions League qualification rivals theRangers who are playing Spartans later this afternoon.

The Celts, for who Chloe Craig was making her 200th appearance for the Hoops, were also harbouring hopes of a title challenge, lay five points behind Glasgow City, a side they had battled to a tiring share of the spoils at K-Park on Wednesday night and who, prior to this afternoon, held a five-point lead over Celtic.

As such there was no room for complacency today against a Hearts side Celtic had taken thirteen goals from without reply in two games earlier this season. Indeed, although the three points was the target, Fran Alonso’s side would also have had an eye on cutting the goal difference on theRangers a point above them in the table and with a fourteen-goal advantage to boot.

Alonso rang the changes again when the teams were announced with Johnstone again coming in for Logan in goal and a back four of Craig, Bartle, Captain Kelly Clark and Tegan Bowie. In midfield Lisa Robertson was partnered by Rebecca McCallister and Kate Nicolson,with Izzy Atkinson and Jacynta supporting Sarah Ewens in attack

The opening 45 minutes was instantly forgettable as Hearts sat deep with two banks of four in front of ‘keeper Parker Smith and looked to counter only occasionally.

In turn Alonso’s tinkering with his first team again led to a period of bedding in for the team as the Celts looked to find rhythm and tempo to their play, indeed it took twenty minutes for Celtic to fashion a real effort at the Hearts goal as a long-range Robertson effort and then a Nicolson effort resulted in efforts from distance but nothing that penetrated Hearts’ backline. 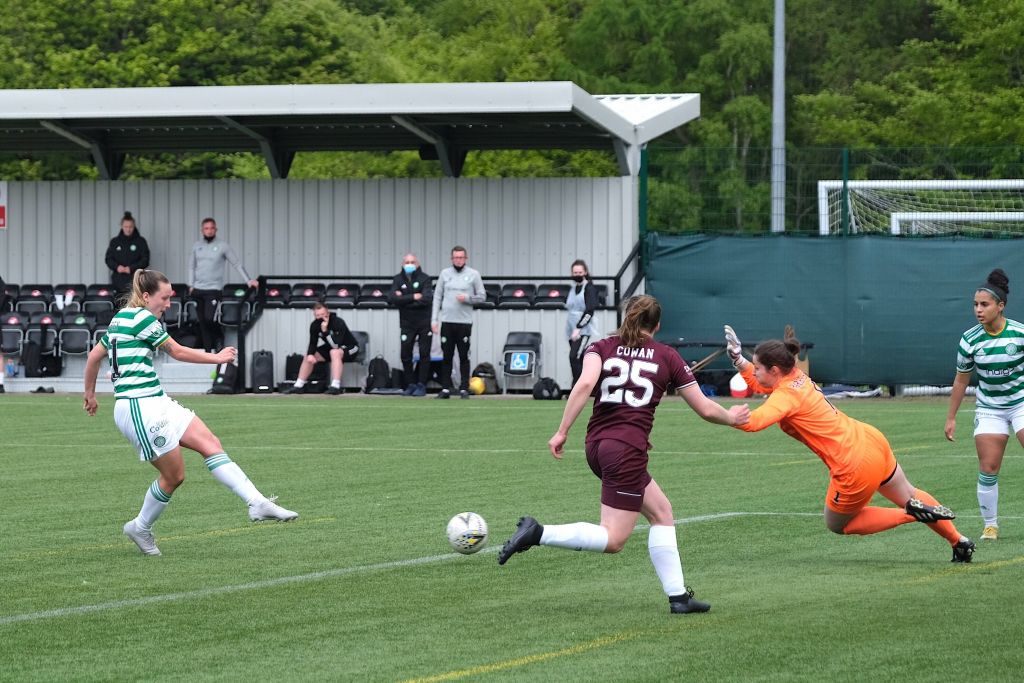 Izzy Atkinson perhaps had the best of Celtic’s first half chances following tidy short passing link up play between McAllister and Ewens found Atkinson on the edge of the box, who in turn took a nice cushioned touch, dropped the shoulder and forced an excellent save from Parker Smith.

Then from the resultant short corner Celtic created a back post headed opportunity for Kelly Clark by way of a nicely worked training ground short corner routine, but again Celtic’s luck was out as the Hearts ‘keeper again came out on top. There were further chances in the opening 45 for Atkinson and Robertson but both were as convincing as Celtic’s first half performance overall. 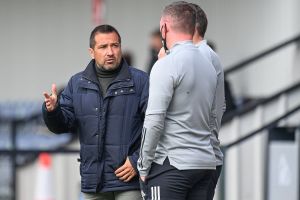 As Celtic went in at half-time with the match goalless Fran Alonso must have been considering trying to utilise the width, get his side to get to the by-line and cut the ball back, as far too much of the opening period was slow paced and played in front of an opponent who was pinching themselves their limited game plan was paying off. Still, this had been the case last time the sides met ay K-Park and Celtic soon found extra gears to emerge three goals to the good. It was going to take something similar from Celtic in the second half at Oriam.

As the teams emerged it was clear Alonso was ringing the changes as four substitutions indicated the head coach’s displeasure, as Bowie, McAllister, Nicolson and Atkinson being replaced by Caitlin Hayes, Anna Filbey, Rachel Donaldson and new signing London Pollard. 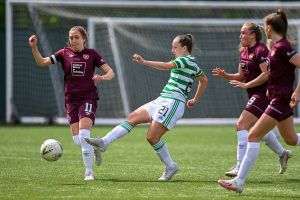 The increase in tempo and pressure was immediate, as Ewens moved wide left, Donaldson to the right, Pollard up front, with Jacynta playing behind Celtic’s latest signing. Filbey slotted in alongside Robertson in midfield and Chloe Craig continued at right back with Hayes partnering Clark in the centre and the versatile Bartle moving to left back.

First up Jacynta linked well with Ewens who delivered a chance for Pollard who was unlucky not to score, before Celtic took the lead two minutes later down the opposite flank.

This time the link play was between Donaldson and Craig and as Craig received the return ball, she took a lovely first touch opened onto her left foot and passed the ball into Parker- Smith’s net from sixteen yards, a most deserved reward for Fran Alonso’s decisive half time changes and an excellent finish too.

And there was more to come after Hayes fed London Pollard who immediately played a beautifully weighted reverse ball onto the on running Anna Filbey who looked to have been stopped by Hearts’ Williamson only to put the past her own goalkeeper and into the bottom corner to put the Celts two up, in agonisingly slow motion for Hearts unlucky defender.

For Celtic the game was now won and it would surely be a case of how many, against an opponent who despite the praise of the BBC commentators for an apparent fine performance, had offered little as an attacking threat. 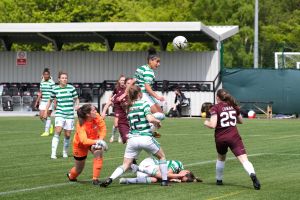 And there were further chances before Celtic added to the score. Jacynta sent in a beautifully weighted, and demanded ball, for London Pollard, who in turn hit a dipping shot from distance just wide. And soon to follow was a 20-yard Free Kick effort from Anna Filbey as Parker-Smith needed the security of both hands behind the ball to keep the ball out.

Yet Filbey wasn’t to be denied as a great run onto a Keeva Keenan pass saw London Pollard open her stride, throw off her marker and cut the ball back from the by-line leaving Filbey with an easy finish for Celtic’s third.

As much as the first half performance from Celtic was laboured the second half was highly impressive, as Alonso introduced his big guns to get the job done, in what ended up being a mirror image of the meeting between these sides at K-Park.

Celtic then go two points clear in second place with a 3-0 win at Oriam, with the pressure now passing to theRangers who also head east to face Spartans later this afternoon.

And a special mention today to super-sub London Pollard. Celtic’s new signing may only be sixteen but what a difference her introduction made today.