You are at:Home»Latest»Hearts Boost – John Beaton gets the whistle for Scottish Cup Final

Hearts will be delighted and Celtic Supporters will be asking themselves.can things get much worse? Today the Scottish FA have decided to kick Celtic when we are down by appointing John Beaton as the referee for the 2019/2020 Scottish Cup Final between Celtic and Hearts at Hampden on 20 December.

This will be Beaton’s first ever Scottish Cup Final, a reward for his impartial and even handed approach to refereeing matches and doing his best to ensure that assaults on Celtic players go unpunished, penalties are dished out the the appropriate recipients and the blue-nosed punters in the Bellshill boozer and all kept smiling.

Ironically enough Robbie Neilson’s Championship side, who under their previous manager eliminated Beaton’s favourites earlier in the competition, will have former Celtic goalkeeper Craig Gordon in goals, due to the Celtic Board deciding against keeping him at the club in the summer. Instead we ended up with Barkas or Bain so it’s fair to say that Hearts will have the best keeper on the day and knowing our recent luck Gordon will end up as Man-of-the-Match. 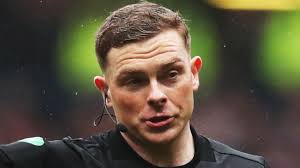 John Beaton will be assisted by Frank Connor and Graeme Leslie while Alan Muir will be the fourth official at the Scottish Cup Final. Nick Walsh and Kevin Clancy are the additional assistants as Celtic look to compete a quadruple treble, the first time this has ever been achieved in world football.

Neil Lennon looks like he’ll be leading out the Hoops, despite increasing pressure on the Celtic board to bow to the inevitable. Tough times these For Celtic are at the moment few supporters have any real appetite for the Cup Final – when it’s the next game that will change and we’ll have John “Penalty to Hearts’ Beaton to worry about!