You are at:Home»Latest»Hearts v Celtic – team news, kick-off time and where to watch

Celtic travel to Edinburgh this evening to face Hearts in the Premiership opener at Tynecastle. The Championship winners will prove to be a stern test for Ange Postecoglou in his first domestic game since arriving as manager. The Australian boss knows how important a good start is to getting the mood around the club lifted after what was a poor result on Wednesday against FC Midtjylland.

Celtic are boosted by the arrival of Carl Starfelt and Kyogo Furuhashi. The summer signings have completed their required quarantine after arriving from Amber list countries and could be in line for debuts tonight. Nir Bitton returns having been suspended for the game in Denmark. Christopher Jullien is out for the next few months, at least, meaning Ange Postecoglou may look to recall Bitton to the starting XI, potentially with Starfelt. 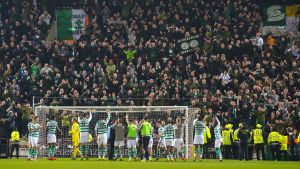 Scott Bain is expected to continue between the sticks but the club look to be nearing a deal to sign Joe Hart from Tottenham Hotspur. Leigh Griffiths missed the game on Wednesday with a calf injury but Albian Ajeti returned meaning that he could be in contention to start after a lethargic performance from Brighton-linked Odsonne Edouard. Olivier Ntcham is not expected to be involved after the manager said last weekend that he was far away from being ready to play. Wingers Mikey Johnston and Karamoko Dembele are still out with injuries. The manager may be tempted to start James Forrest after he came off the bench on Wednesday.

The game at Tynecastle kicks off at 8pm.

The game will be on Sky Sports Main Event, with coverage beginning at 7:30pm.

We’ll bring you the Team Lineups when we have them. Hopefully we will see an impressive start from Postecoglou’s side as we try to regain the league title.