You are at:Home»Latest»“He’s a major asset for Celtic,” Robinson on £3.25m signing, David Turnbull

The former Motherwell manager Stephen Robinson is looking on with plenty of price but no surprise as David Turnbull is flourishing in Ange Postecoglou’s exciting Celtic side this season. Robinson guided the midfielder through his development at Fir Park and was there for him when his dream move to Celtic, after turning down Norwich City, hit the buffers amid a medical issue spotted by Celtic’s doctors which resulted in the transfer being put on hold, Turnbull going under the knife and thereafter facing practically a full season on the sidelines.

And Robinson is full of praise for the former Celtic manager Neil Lennon who he acknowledges was as good as his word coming back in again for the midfielder and crucially for Motherwell’ financial well-being, honouring the previously agreed price of £3.25m to sign the player. Celtic are good for their word, maybe something that theRangers should have considered when invalidating those 750 away end tickets for the game this Sunday and in doing so weakening the appeal of Scottish football for worldwide audiences. Anyway, back to David Turnbull! 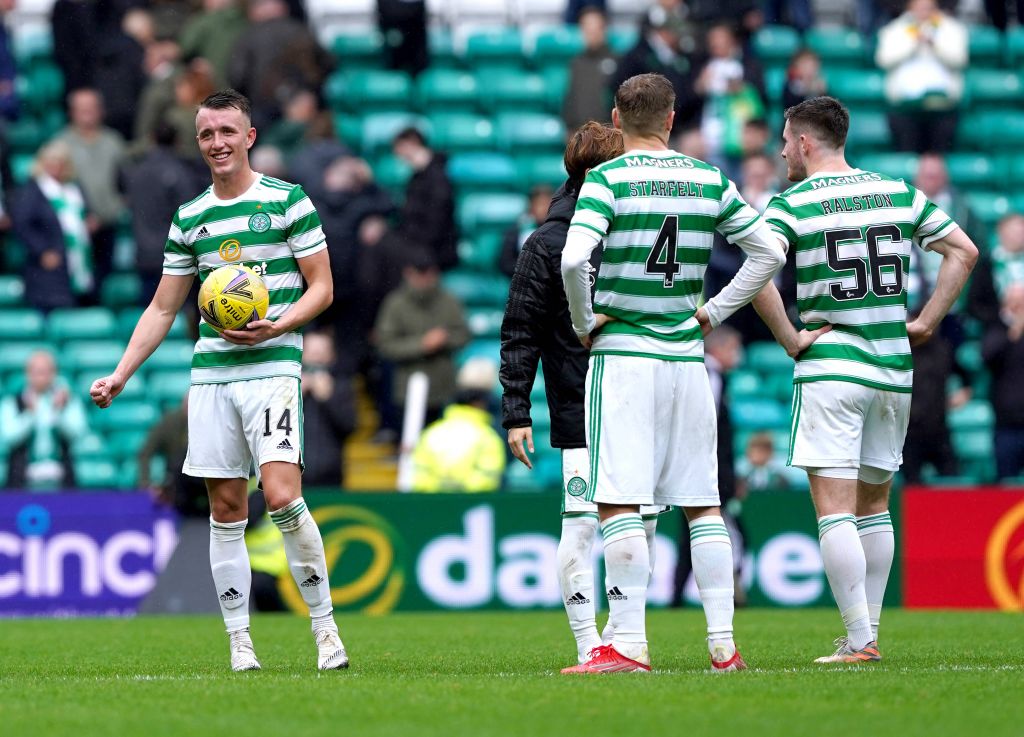 Few could argue that this £3.25m transfer fee was not money well spent, as Turnbull secured his first ever hat-trick in the 6-0 weekend win over St Mirren at Celtic Park as he becomes an established star in Celtic’s attacking midfield alongside the likes of Tom Rogic, Callum McGregor and Ryan Christie.

Turnbull is set to star in Celtic’s next two matches – away to AZ Alkmaar in the second leg of the Europa League Play-off round with Celtic taking a 2-0 lead to Holland. Then on Sunday it’s that trip to Ibrox for the first Glasgow derby of the season and Postecoglou will be telling his players to attack in both these games. The onus therefore is going to be on the likes of David Turnbull to deliver, and who would bet against him?

“The level of David’s performances for Celtic right now is no surprise for me. He’s always had that kind of talent,” his former manager Robinson told Scottish Sun. “But, obviously, playing alongside even better players than at Motherwell has got to improve his game.

“David’s also got another good manager in Ange Postecoglou — and from what I can see he’s become an integral part of the team. He’s growing fast as a player on a huge stage and I couldn’t be happier for David and his family,” Robinson added. 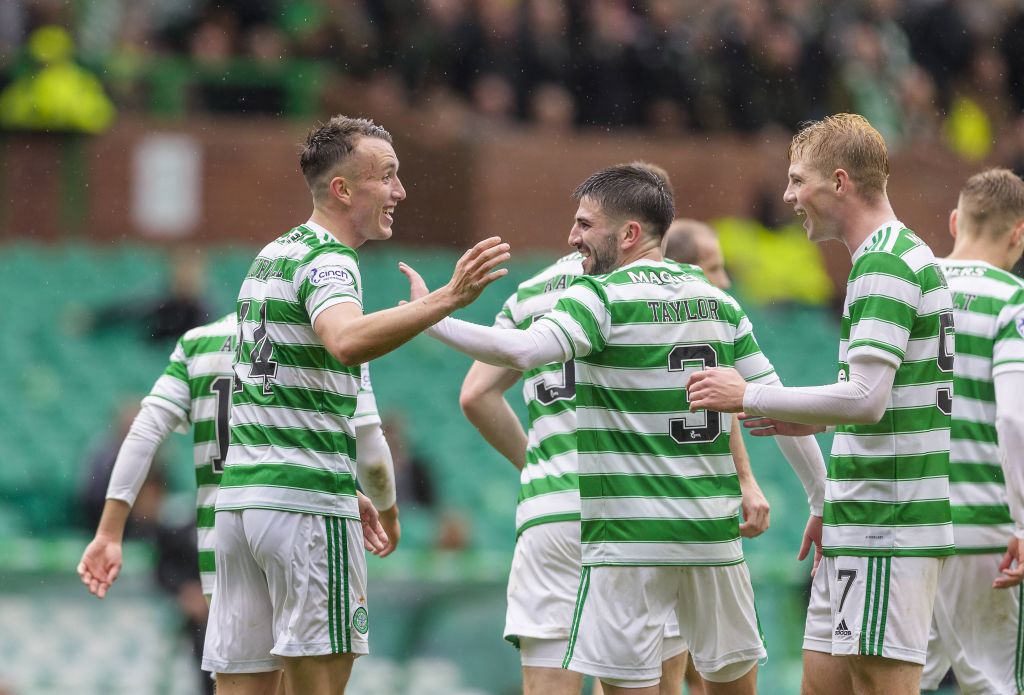 David Turnbull celebrates his hat-trick with his team-mates. Photo by MB Media

“He is a brilliant boy, humble and grounded. But he also doesn’t lack self-belief. David has that confidence you need to play for a club like Celtic. I think he has always backed himself to play at a higher level and he’s proving it in some style. He’s got two great feet, ability and vision.

“David is putting an end product to his game, which is making him stand out. He can control matches and score goals — those players are worth millions. I’d describe him as one of the best players I’ve worked with, if not the best. From the early days at Motherwell you could see David had that belief he could handle a football — and nobody could get near him.

“It’s interesting to sit back and watch his career from afar. David had good coaching coming through the ranks at Motherwell and there are a lot of people there who can feel pride at his development. The future looks fantastic for David — and you wonder how far he can actually go,” Robinson continued.

“He’s excelling with Celtic’s current style of football. I watched one of their games the other day and it was fantastic. David was at the heart of everything, making passes, providing some assists and trying to score goals.

“He’s an extremely laid-back character. Nothing’s going to bother him much. And you can bet he’s impatient for the games against AZ Alkmaar and (the)Rangers. They are two proper pressure fixtures — but David’s made for them. 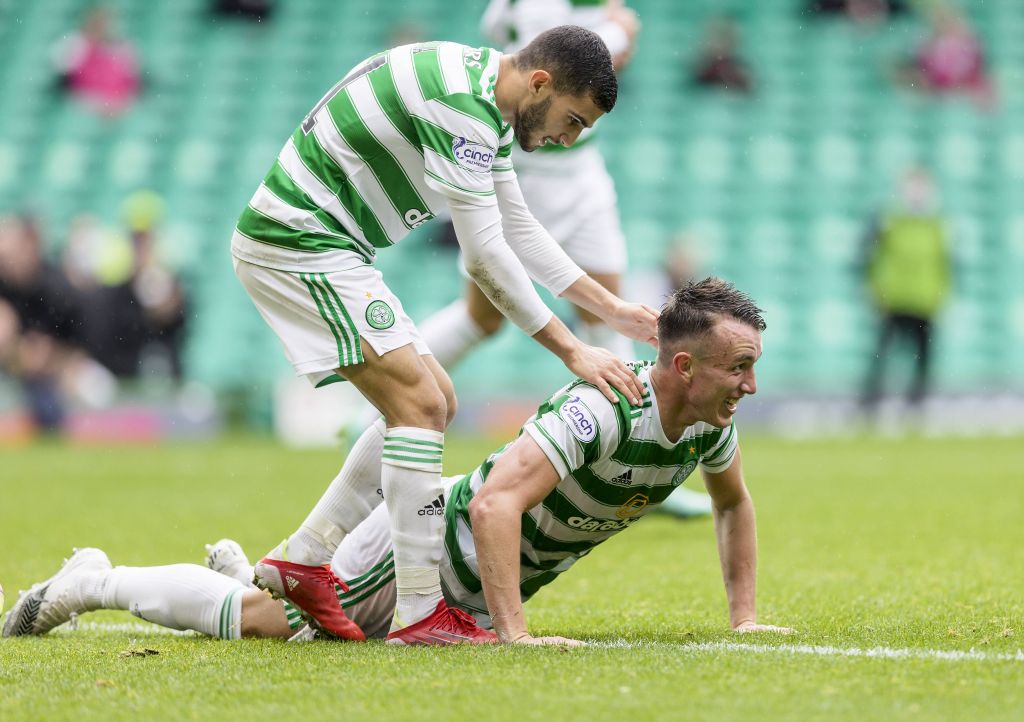 “The only thing I ever thought about David, constructively, was his fitness levels could be better. But you can see that coming with regular first-team football at Celtic’s level in the league and Europe,” he added.

Robinson reckons that the former Motherwell man will progress so much at Celtic that he will inevitably attract attention from other clubs. “The worry for Celtic is that they may soon struggle to hang on to him if he keeps doing what he is doing at the minute. Goalscoring midfielders always attract attention, especially when you get the profile at Celtic.

“David just needs to keep playing and getting better and better. English Premier League and Championship clubs constantly monitored him at Motherwell. Norwich City tried to sign David before the original move to Celtic fell through, so I’m certain there will be plenty of clubs tracking his progress.

“But I can’t imagine Celtic wanting to lose him any time soon. They will see him as a key player for trying to win the league back and other success. He’s a major asset for Celtic.” 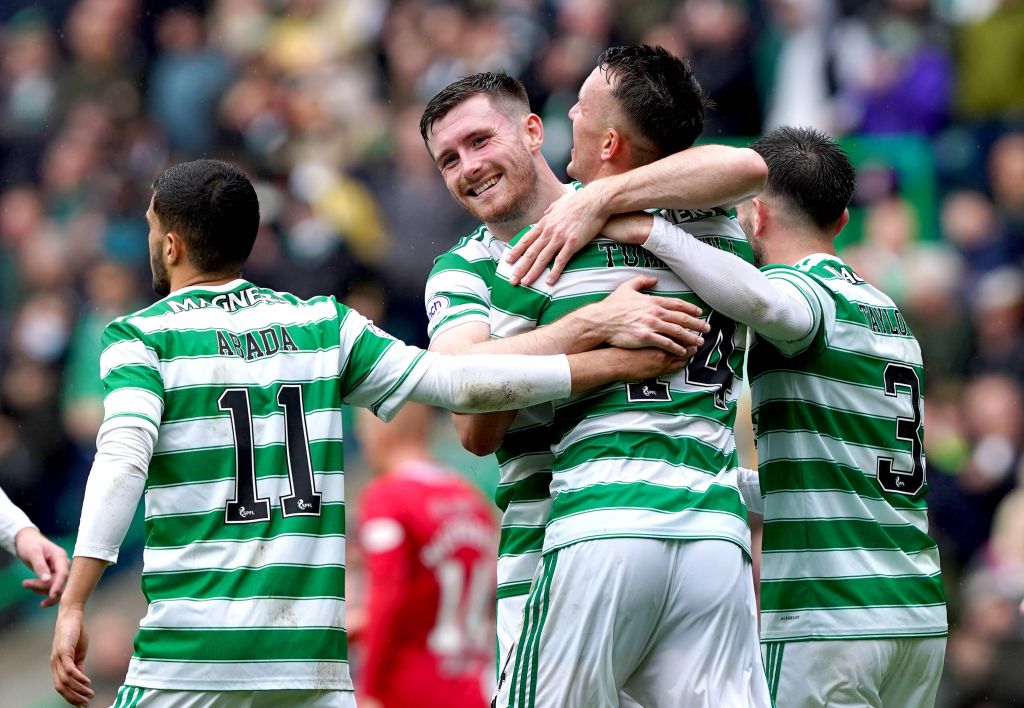 A professional Celtic display reminiscent of years gone by
A Massive Celtic win as pragmatism meets artistry. A sliding doors moment…
Video: Class – Ange and his players celebrate after win at Fir Park

Robinson also made a point of praising Neil Lennon as we mentioned above. “Neil was brilliant with David and Motherwell. It was a massive fee for the club — the biggest-ever sale — and it was a deep disappointment for everyone, but especially David.

“Neil, though, was as good as his word. And he deserves massive credit for ensuring Celtic still signed David the following summer and for the originally-agreed fee. Neil had total belief in David — and now they’ve got a fantastic footballer.

“Ange Postecoglou is getting the best out of David and developing him further. But no one should forget the part Neil has played. Lenny was careful last season in how he introduced him to the team. But once David got a run of games there was no looking back and he finished the season well, including a Scotland cap and a place in the Euro 2020 squad,” the former Motherwell manager noted.

Previous ArticleVideo: Kyogo is the Celtic player these fans outside Ibrox fear most
Next Article AZ Alkmaar v Celtic – “We’ve got to stand the test of time,” Ange Postecoglou Media Conference