You are at:Home»Latest»Hibernian v Celtic – team news, KO time and where to watch

Celtic face Hibernian at Easter Road this evening in what could prove to be a mouthwatering tie between the sides. Jack Ross’ Hibs have lost their last three and they will look to address that slump against Ange Postecoglou’s men, who have won their last three League games. Celtic have looked more commanding with the ball, restricting their opponents from gaining chances on the counter-attack – something that will please the manager and his coaching staff.

The manager has confirmed that there are no fresh injury concerns. James Forrest and Christopher Jullien will not make the game as they continue their return from injury. Mikey Johnston’s cameos against Ferencvaros and St Johnstone will certainly give the manager something to think about. However, his potential inclusion would mean that either Kyogo or Giorgos Giakoumakis would need to drop out. It is something for the manager to ponder but certainly not a bad issue to have. 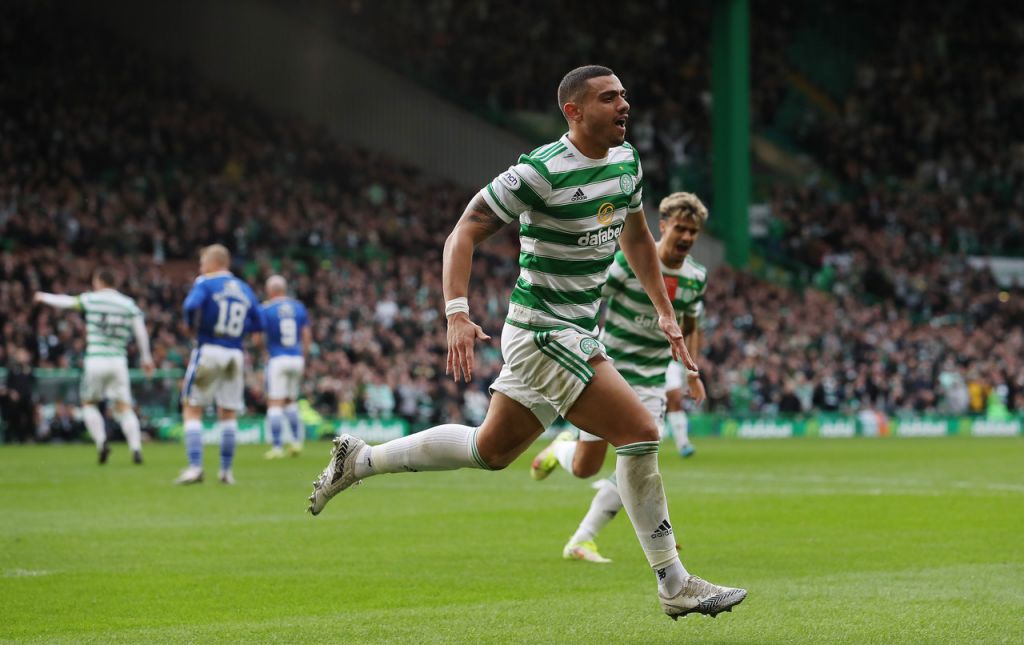 Giorgos Giakoumakis of Celtic celebrates after scoring the opening goal during the Cinch Scottish Premiership match between Celtic FC and St. Johnstone FC at on October 23, 2021 (Photo by Ian MacNicol/Getty Images)

Defensively, the likelihood is that Postecoglou will persist with the same back four of Juranovic, Carter-Vickers, Starfelt and Ralston. The four kept a clean sheet along with Joe Hart on Saturday and barring any injuries, you would expect that the manager would continue as is. If Celtic are fortunate enough to get any penalties, Juranovic will be on them.

In midfield, the manager may look to bring Nir Bitton in as he did against Aberdeen. Bitton would allow captain Callum McGregor a more diverse role in what could be a troublesome away venue. James McCarthy is due back from a slight injury concern but it is unclear whether he will feature given the fraught nature that is expected at Easter Road.

In attack, Liel Abada will be hoping to get the nod ahead of either Mikey Johnston or Kyogo (if Giakoumakis starts) and the Japanese forward will hope his name is on the teamsheet in his preferred striking position ahead of the Greek.

The game will kick-off at 7:45pm (Celtic Park time). There will likely be a minute’s remembrance of former Scotland manager Walter Smith, as was the case at games last night.

If you are one of the few lucky enough to get a ticket for the game, you are covered. However, for sets of both fans around the country, the game was not selected to be shown by Sky Sports and will only be accessible through a PPV stream from Hibs FC, which costs £15.

A trip to the capital awaits ✊

Another day another challenge for Ange and the Bhoys. Easter Road is never an easy place to go and the site of many a great game between @CelticFC and @HibernianFC Have to say I'm excited but hopeful of 3 points and more progress for our team. HH pic.twitter.com/5HBanVDm5g

Previous ArticleLive on Sky: Celtic’s have four dates added to TV festive period calendar
Next Article Celtic target a long overdue league win at Easter Road, our last one was in January 2014